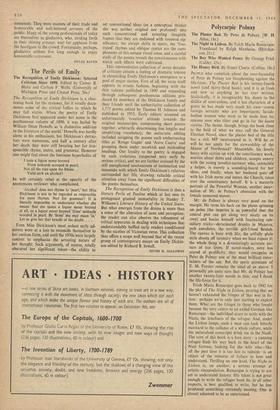 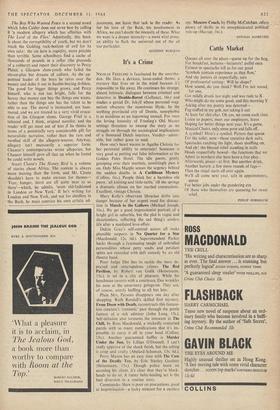 The Boy Who Wanted Peace. By George Friel. (Calder, 25s.)

PEOPLE who complain about the over-fecundity of Peter de Polnay are blaspheming against the life-force. The Plaster Bed is his twenty-fourth novel (and thirty-third book), and it is as fresh and new as anything he has ever written. Stylistically, it is recognisably his, down to the dislike of semi-colons, and it has characters of a genre he has made very much his own—comic foreign servants who are impertinent; lavish- bodied women who want to be made love to; epicene men who titter and go in for the haute cuisine. The theme, though, brings the book close to the field of what we may call the General Election Novel, since the plaster bed of the title has a sick MP incarcerated in it. Will he or will he not apply for the stewardship of the Manor of Northstead? Meanwhile, his lovely bossy wife carries on with the constituency work, worries about debts and children, accepts venery with the young novelist-narrator who, ostensibly a helper, is merely a sounding-board for her ideas, and finally, when her husband goes off with his Irish nurse and enters the Church, takes over the constituency herself. It is a masterly portrait of the Powerful Woman, another incar- nation of Mr. de Polnay's obsession with. the female unmoved mover.

Mr. de Polnay is always very good on the margin. He turns his back on the plates spinning on poles (the impetus is so powerful that the central plot can get along very nicely on its own) and busies himself with fascinating sub- sidiary tricks—deracinated drunks in Majorca, pub anecdotes, the terrible girl-friend Beulah. The canvas is busy with life; the artfully plain style shoots off intensity when we least expect it; the whole thing is a devastatingly accurate pic- ture of our times. If novel-readers were less scared of prolificity, they would recognise in Peter de Polnay- one of the most brilliant enter- tainers of the age. But the spare quincunx of E. M. Forster remains the ideal of an (vivre. I personally am quite sure that Mr. de Polnay has another twenty-four novels in him, and I thank the life-force for it.

Erich Maria Remarque goes back to 1942 for the plot of The Night in Lisbon, proving that we haven't exhausted the fringes of that war in fic- tion: perhaps we're only just starting to exploit them. What are the fringes to those who fought become the very centre to an exiled German like Remarque—the individual score to settle with the Nazis, the loneliness of the refugee. And, under the Lisbon lamps, such a man can look bitterly eastward to the collapse of a whole culture, while the uninvolved conscripts drink tea in the Naafi. The core of this book is a love story : a cunning refugee finds his way back to the heart of the Nazi fortress, looking for the wife who—like all the past time it is too late to redeem—is an object of the remorse of failure to love and understand. Thrilling on one level, The Night in Lisbon is, on another, a serious attempt at artistic encapsulation. Remarque is trying to use art to understand history. His talent is not great enough to write the refugee book he, in all other respects, is best qualified to write, but he has produced something extremely moving. One is almost ashamed to. be so entertained. The Boy Who Wanted Peace is a second novel which John Calder does not serve best by calling it 'a modern allegory which has affinities with The Lord of the Flies.' Admittedly, this book is about the corruptibility of youth, but we don't reach the Golding rock-bottom of evil for its own sake: the sin here is cupidity, more pitiable than terrible. Some schoolboys find a cache of thousands of pounds in a cellar (the proceeds of a robbery) and report their discovery to Percy Phinn, a Glasgow slum-youth who failed the eleven-plus but dreams of culture. As the ap- pointed leader of the boys he takes over the money and doles it out in bauble-buying driblets. The greed for bigger things grows, and Percy himself, who is not too bright, falls for the heresy that money can buy the things one wants, rather than the things one has the talent to be able to use. The moral is insinuated, not ham- mered, and we are treated to a very vivid evoca- tion of the Glasgow slums. George Friel is a talented and, I think, original novelist, and the reader will get most out of him if he 'thinks in terms of a potentially very considerable gift for naturalistic narrative, rather than the rare and rarefied skill of the allegory-weaver. Anyway, allegory isn't necessarily a superior form. Chaucer's contemporaries wrote allegories, but Chaucer himself gave all that up when he found he could write novels.

Stuart Cloete's The Honey Bird is a volume of stories about Africa. The content is always more moving than the form, and Mr. Cloete shouldn't have to make excuses for themes— 'Fear, hunger, thirst are all quite 'near to us there'—which, he admits, 'seem old-fashioned in London or New York.' If he's writing for London and New York, and not for dwellers in the Bush, he must contrive his own artistic ad-

justments, not leave that task to the reader. As for his love of the Bush, his involvement in Africa, we can't doubt the intensity of these. What we want is a deeper intensity—a more vital prose, an ability to flash the universal out of the all too particular.