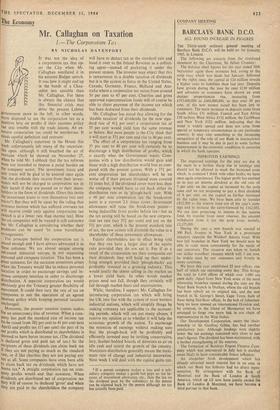 Mr. Callaghan's statement in the House this Week unfortunately left many of the uncertain- ties open, although it still breathed the air of restraint which he showed on November 27, When he told Mr. Lubbock that the tax reforms Were not intended to impose a penal burden on the company sector. The investment trusts and unit trusts will be glad to be assured once again that the dividends they receive from their invest- ments will not be charged to corporation tax in their hands if they are passed on to their share- holders in the form of dividends. (Does this invite the investment trusts to turn themselves into unit trusts?) But they will be upset by the ruling that overseas income which has suffered overseas tax Will receive credit only against corporation tax (which is at a lower rate than income tax). How the oil companies will be treated is still unknown but Mr. Callaghan is considering whether their Problems can be eased 'by some transitional arrangements.'

The principle behind the corporation tax is sound enough and I have always advocated it in these columns. We are almost unique among advanced industrial nations in not separating Personal and company taxation. This has been a great nuisance, for the occasion sometimes arises When the Treasury would like to reduce personal taxation in order to encourage savings and in- crease company taxation in order to discourage distribution. A separate corporation tax would Obviously give the Treasury greater flexibility of movement. It could then vary the rate of tax on Fompanies to suit the operation of an agreed Incomes policy while keeping personal taxation Unchanged.

Moreover, the present taxation system makes for an unnecessary loss of revenue. When a com- Pany has paid the standard rate of income tax (to be raised from 384 per cent to 41 per cent next April) and profits tax (15 per cent) the part of its net profits which is distributed to shareholders is deemed to have borne income tax. (The dividend IS declared gross and paid net of tax.) So the recipients of these dividends can claim back tax if they are not paying as much as the standard rate, or if like charities they are not paying any tax at all. Some companies have even been able to claim back tax on dividends which have not borne tax.* A straight corporation tax on com- Pany profits would end that nonsense. When dividends are distributed net of corporation tax they will of course be declared 'gross' and when they are paid to the shareholders the company

will have to deduct tax at the standard rate and hand it over to the Inland Revenue as a collect- ing agent—instead of pocketing it under the present system. The investor may object that this is tantamount to a double taxation of dividends but it is the system in force in the United States, Canada, Germany, France, Holland and Aus- tralia where a corporation tax varies from around 50 per cent to 47 per cent. Charities and gross approved superannuation funds will of course be able to claim payment of the income tax which has been deducted from their dividends.

Mr. Callaghan has stated that allowing for the 'double taxation' of dividends (at the new stan- dard rate of 414 per cent) a corporation tax of 35 per cent would yield him the same revenue as before. But most people in the City think that it will start at 374 per cent and rise to 40 per cent.

The effect of a corporation tax ranging from 35 per cent to 40 per cent will certainly be to discourage a high distribution of profits, which is exactly what the Government wants. Com- panies with a low distribution would gain and those with a high distribution would lose as com- pared with the present system. With a 374 per cent corporation tax shareholders will be no worse off if their present dividend were covered 14 times but, if the dividend cover were less, then the company would have to cut back either its distribution rate or its 'plough-back' rate. With a 40 per cent corporation tax the break-even point is a current 2.1 times cover. Investment allowances will raise the break-even points— being deductible from profits before tax—but as the tax saving will be based on the new corpora- tion tax rate (say 374 per cent) and not on the 534 per cent, which is the present standard rate of tax, the new system will diminish the value to a shareholder of these investment allowances.

, Equity shareholders are in effect being told that they can have a larger slice of the equity cake provided they do not eat it. For if as a result of the corporation tax their companies cut their dividends they will build up their under- lying strength provided their 'plough-backs' are profitably invested in a growing industry. This would justify the shares selling in the market on a lower yield basis. In other words market prices need not fall, though they certainly will fall through market fears and uncertainties.

While, therefore, I support Mr. Callaghan for introducing corporation tax which will bring the UK into line with the system of most western industrial nations, which will simplify things by making company tax applicable to the account- ing periods, which will cut out many abuses, I reserve my opinion as to whether it will help the economic growth of the nation. To encourage the retention of earnings without making sure that the plough-back will be profitably and efficiently invested may be inviting conservative, lazy, feather-bedded boards of directors to sit on idle cash and retard the growth of the country. Maximum distribution generally means the maxi- mum rate of change and industrial innovation. Next week I will deal with the capital gains tax.

* If a parent company makes a loss and a sub- sidiary company makes a profit but pays no tax be- cause of investment allowance, etc., then the tax on the dividend paid by the subsidiary to the parent can be claimed back by the parent although no tax has actually been paid.