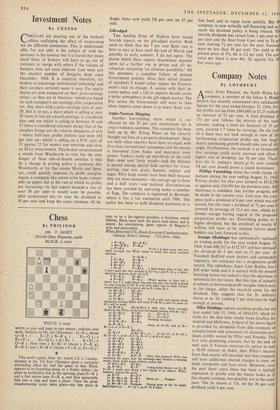 IRCULARS are pouring out of the brokers' ‘,../offices explaining the effect of corporation tax on different companies. This is understand- able, for not only is the subject of vital im- portance to the investor but it is feared that many small firms of brokers will have to go out of existence or merge with others if the volume of business does not soon improve. Last week saw the smallest number of bargains done since December, 1962. It is essential, therefore, for brokers to encourage institutional 'switching' and their circulars certainly make it easy. For equity shares are now compared on their price-earnings ratios-as they are in America-which are based on each company's net earnings after corporation tax. Any share with a price earnings ratio of over 20, that is to say, a share which is selling at over 20 times its last net annual earnings, is considered dear and one which is selling at between 10 and 15 times is considered relatively cheap. One of the circulars brings out the relative cheapness of Gus -where half-year profits (before tax) were 15+ per cent up-which is selling on a PIE ratio of 15 against 25 for MARKS AND SPENCER and close on 20 for WOOLWORTH. This broker recommended a switch from Woolworth to Gus, but the only danger of these rule-of-thumb switches is that by a change in pricing policy a company like Woolworth, or for that matter Marks and Spen- cer, could quickly improve its profit margins. Again, a company like ANGLO AUTO looks vulner- able on paper, but at the rate at which its profits are increasing-its last report showed, a rise of over 50 per cent-it would soon be possible, after corporation tax, to raise the dividend to 50 per cent and keep the same retention. At 6s.

Gilt-edged Two leading firms of brokers have issued bearish reports on the gilt-edged market. Both seem to think that the 7 per cent Bank rate is here to stay at least until the end of March and possibly to early summer. I do not agree. The 'gloom which these reports disseminate depends

upon (a) a further rise in prices and (b) de- valuation remaining 'an ultimate possibility.' All

this presumes a complete failure of present' Government policies. After their initial chapter of accidents I would rather expect the Govern- ment's luck to change. A success with their in- comes policy and a fall in imports should create a better atmosphere in the gilt-edged market. The first action the Government will want to take when imports come down is to lower Bank rate.

Another low-yielding share which is not affected by the 35 per cent corporation tax is ANGLO-NORNESS SHIPPING. This company has been built up by Mr. Erling Naess on the cleverly

thought out lines of a property development. Ships are built when charters have been arranged with first-class international companies and the money is borrowed from banks and insurance com- panies. Tankers make up two-thirds of the total fleet-now over forty vessels-and the balance is spread among special bulk carriers for trans- porting iron ore, grain, bauxite, sulphur and sugar. Very large vessels have been built because they are more economic-the average age is three and a half years-and political discrimination has been avoided by operating under a number of flags. The company is registered in Bermuda where it has a tax exemption until 1986. The policy has been to hold dividend payments at a low level and to repay loans quickly. But company is now virtually self-financing and as result the dividend policy is being relaxed. 'Th interim dividend was raised from 1 per cent to per cent and the final from 4 per cent to 51 cent, making 74 per cent for the year. Earnin were no less than 30 per cent. The yield at tb present price of 47s. 6d. is 3.2 per cent. The asse value per share is now 46s. 5d. against 21s. 9 five years ago.