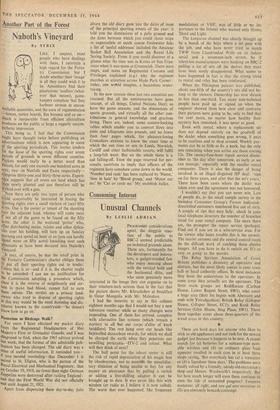 By STRIX This being so. I feel that the Commission might have thought twice before publishing an advertiseMent which is now appearing in some of the sorting periodicals. This invites tenders for the lease of the sporting rights over seven Parcels of grounds in seven different counties. !'ackets would really be a better word than Parcels, for only one exceeds one hundred acres in area; two—in Norfolk and. Essex respectively-

* . ciOrpprise thirty-one and thirty-three acres. Experi- adilce suggests that all seven are land which has Pen newly planted and can therefore still be Iyalked over with a gun. Now there are only two types of person who Opuld conceivably be interested in leasing the sTorting rights over a small enclave of (say) fifty acres. One is the owner or tenant of the shooting Oyer the adjacent land, whence will come most ir not all of the game to be found on the fifty acres; the other is the weekend 'potter' who, after distributing maize, raisins and other delica- cies over his holding, will turn up on Sunday Morning and spend an hour or so (you can hardly Spend more on fifty acres) knocking over such

, It may, of course, be that the small print in the Forestry Commission's charter obliges them _to put all their sporting rights out to tender. Unless this is so—and if it is, the charter ought to be amended—I can see no justification for the Commission adopting a procedure which, since it is the reverse of neighbourly and cer- tain to make bad blood, cannot fail to earn them odium. The verdict on a private land- owner who tried to dispose of sporting rights in this way would be the most damning and dis- Missive known to the countryside—'he doesn't know how to go on.'

For years I have obtained my pocket diary from the Regimental Headquarters of Her Majesty's First or Grenadier Guards, and I was Chagrined to find, when.the 1965 edition arrived last week, that the format of this admirable pub- lication has been changed. The old diary was a !rune of useful information. It reminded you— If You needed reminding—that December 1 is sacred to St. Eligius, who is the patron of the Royal Electrical and Mechanical Engineers: that O n October 19, 1918, no fewer than eight German 4Ppelins were destroyed after raiding England: and that the First World War did not officially end until August 21, 1921.

Apart from dispensing these day-to-day faits divers the old diary gave you the dates of most of the principal sporting events of the year; it told you the dimensions of a polo ground and the dates between which you could shoot snipe or capercailzie or catch coarse freshwater fish; a list of 'useful addresses' included the Amateur Basket Ball Association and the Royal Life Saving Society. From it you could discover at a glance what the time was in Korea or San Fran- cisco when it was noon at Greenwich. There were maps, and notes on Regimental Customs and Privileges explained (e.g.) why the regiment marches at attention across Hyde Park Corner: today, one would imagine, a hazardous under-

In the new version these last two amenities are retained. But all the anniversaries have gone (except, of all things, United Nations Day); so have the game seasons, and the dimensions of sports grounds, and virtually all the other con- tributions to general knowledge and gracious living. There are, indeed, some austere-looking tables which enable you to convert litres into pints and kilograms into pounds, and no fewer than four pages which, for pleasure-loving Grenadiers anxious to know the exact time at which the sun rises or sets in Leeds, Norwich, Cardiff and other fashionable resorts, will fulfil a long-felt want. But on the whole there is a sad falling-off. Even the page reserved for per- sonalia contrives to imply that officers of the regiment have somehow come down in the world. 'Number and rank' has been replaced by 'Name,' 'Size in hats' by 'Blood group,' and 'Motor car no.' by 'Car or cycle no.' My snobbish italics.