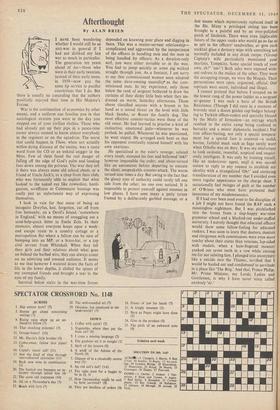 War is the continuation of economics by other means, and a uniform can fossilise you in that sociological stratum you were in the day you stepped out of your civilian clothes. Those who had already put up their pips in a peace-time career always seemed to know almost everybody in the regiment or on the squadron. The worst that could happen, to Them, when not actually within dying distance of the enemy, was a nasty word from the CO or an unkind snigger in the Mess. Few of them faced the real danger of falling off the edge of God's palm and landing face down among the privates. The way they tell it there was always some old school chum, or a friend of Uncle Jack's, or a chap from their club, who was fortunately able to explain that what looked to the naked eye like cowardice, hooli- ganism, scruffiness or Communist leanings was really just an unfortunate way of expressing themselves.

I look in vain for that sense of being an incognito Dreyfus, lost, forgotten, cut off from free humanity, on a Devil's Island, 'somewhere in England,' with no means of smuggling out a send-help-quick letter to Emile Zola. In their memoirs, almost everyone keeps open a week- end escape route to a country cottage or a metropolitan flat where a fellow can be sure of bumping into an MP, or a brass-hat, or a top civil servant from Whitehall. When they tell their girls and their relatives about what goes on behind the barbed wire, they can always count on an admiring and amused audience. It seems to me that however I watered down the facts of life in the lower depths, it chilled the spines of my exempted friends and brought a tear to the eyes of my family.

Survival below stairs in the war-time forces depended on knowing your place and digging in there. This was a master-servant relationship- complicated and aggravated by the inexperience of the officers in handling men and the men in being handled by officers. As a duration-only serf, you were either invisible or in the way. You had to jump quickly or some pig walked straight through you. As a feminist, I am sorry to say that commissioned women soon adopted the same slave-owning mentality as the com- missioned men. In my experience, only those below the rank of sergeant bothered to draw the curtains of their dinky little huts when they un- dressed on warm, Saturday afternoons. Those above classified anyone with a broom in his hand as a sexual threat on the level with little black Sambo, or Rover the family dog. The most effective counter-tactics were those of the old sweat. He had learned to practise a kind of instinctive, emotional judo-whenever he was pushed, he pulled. Whenever he was questioned, he went stupid. He arranged each bout so that his opponent eventually injured himself with his own exertions.

He specialised in the valet's revenge; saluted every insult, stamped his feet and bellowed `stR!' however impossible the order, and about-turned like an automaton before departing to execute the silent, unspeakable counter-attack. The worm turned nine times a day. But owing to the fact that the glassy eyes of authority could rarely tell one side from the other, no one ever noticed. It is impossible to protect yourself against enemies in low places. I have seen many a petty tyrant framed by a deliberately garbled message, or a

lost memo which mysteriously replaced itself in the file. Many a privileged outing has been brought to a painful end by an over-polished patch of linoleum. There were even implacable haters of the upper ranks who would go so far as to spit in the officers' sandwiches, or give each cocktail glass a derisory wipe with something not normally included in any drink recipe. (`Group Captain's wife particularly mentioned your martinis, Tompkins. Some special touch of your own, eh?' stR1') Both sides were exposed with- out redress to the malice of the other. They were the occupying troops, we were the Maquis. Their persecutions were open, organised, official. Our reprisals were secret, individual and illegal.

I cannot pretend that before I scraped on to the lowest rung of the power ladder as a sergeant air-gunner I was such a hero of the British Resistance. (Though I did once in a moment of bravado steal a dozen golden cap badges belong- ing to Turkish officer-cadets and specially blessed by the Mufti of Jerusalem-an outrage which resulted in the entire camp being confined to barracks and a minor diplomatic incident.) For true officer-baiting, not only a special tempera- ment but a special face is essential-a stolid, bovine, faithful mask such as Iago surely wore when Othello was on duty. It was my misfortune to look sardonic, resentful, sceptical and suspici- ously intelligent. It was only by training myself, like an undercover agent, until it was second nature to reply to any request to establish my identity with a strangulated 'Oh!' and stuttering transliteration of my number that I avoided even more regular appearance on the charge sheet. I occasionally feel twinges of guilt at the number of O'Briens who must have protested their innocence of my misdemeanours.

If I had ever been used even to the discipline of a job I might not have found the RAF such a meaningless nightmare. But I was pitchforked into the forces from a slap-happy war-time grammar school and a blacked-out under-staffed university. I naively thought that educated officers would show some fellow-feeling for educated rankers. I was soon to learn that doctors, dentists and clergymen with commissions were even more touchy about their status than veterans, lop-sided with medals, when a ham-fingered monster yanked out seven teeth in a row while cursing me for not saluting him. I plunged into anonymity like a suicide into the Thames, terrified that I would be hauled out and condemned to servitude in a place like 'The Brig.' And that, Prince Philip, Mr. Prime Minister, my Lords, Ladies and Gentlemen, is why I have never since called anybody 'sir.'