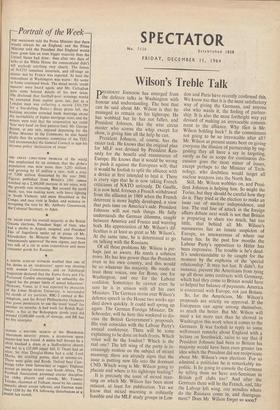 THE PRESIDENT told the Prime Minister that there would always be an England, and the Prime Minister told the President that England would have given him an even bigger majority than the United States had done: then after two days of talks at the White House the communiqué didn't tell anybody anything very clearly. The future of NATO remained uncertain, and off-stage an atomic test by France was reported. At least the atmosphere in Washington was warm: the scene at home continued bleak. The dread words 'credit squeeze' were heard again, and Mr. Callaghan gave some belated details of his new taxes. (He disclosed that football-pool winnings would bo exempted from capital gains tax, just as a London man was collecting a • record £301,739 for ai"- five-shilling flutter.) Share prices fell, the building societies sounded fresh warnings about thp inevitability of higher mortgage rates, and the miners were told that the corporation tax could 'bear very hard' on their pension fund. Mr. George Brown, at any rate, enjoyed deputising for the Prime Minister in the Commons; he also heard gladly that the economic committee of the TUC had recommended the General Council to sign his incomes policy 'declaration of intent.'

"tIlE GREAT LONG-TERM PROBLEM Of the world was emphasised by an estimate that the globe's population was now more than 3,283 million. and growing by 65 million a year, with a total of 7,000 million threatened by the year 2000. Figures published from Britain's 19.61 census notched up a 2,300,000 increase in ten years, with the growth rate increasing. But around the earth death, too, was making news, with fierce fighting in South Vietnam, and more bloodshed in the Congo, and race riots in Sudan. and violence in- terrupting the visit by Mr. Anthony Greenwood, the Colonial Secretary, to Aden.

DR. JAGAN LOST his overall majority in the British Guiana elections, President Segni of Italy, who had a stroke in August, resigned, and President Tito of Jugoslavia spoke up in praise of' Mr. Khrushchev. In Moscow the Supreme Soviet 'unanimously approved' the new rdgime, and there Was talk of a cut in arms expenditure and more consumer goods for Russians.

A SOUTH AFRICAN WITNESS testified that one of his duties a's an 'undercover' agent was sleeping with women Communists, and an Edinburgh magistrate declared that the Karna Sutra and The Perfumed Garden encouraged 'an unhealthy dis- regard for the proper limits of sexual behaviour.' However, Venus, so it was reported by physicists at the Johns Hopkins University, is surrOunded by clouds of icy particles. BBC-2 opened in Bir- mingham, and the Royal Philharmonic Orchestra was given permission to use the word 'royal' for another six months. A bad week for British Rail- ways: a tire at the Bishopsgate goods yard did around £5,000,000 worth of damage, and BR has no fire insurance.

DURING A ROUTINE SEARCH at the Blundeston 'maximum security' prison, a mysterious spare master-key was found. A tennis ball thrown by a Child blocked a drain at a Staffordshire church and led to a /25,000 repair bill. U Thant had an Ulcer, Sir Alec Douglas-Home had a cold. Lord Marks, the retailing genius, died at seventy-six. There were gales and floods. Oxford beat Cam- bridge (who were favourites) at rugger; England scored an innings victory over South Africa. The Football Association promised stricter discipline for clubs, players and crowds, Mr. Tommy Trinder, chairman of Fulham, stood by his caustic remarks about soccer referees, and Everton were fined £250 by the FA following disturbances at a match last month.