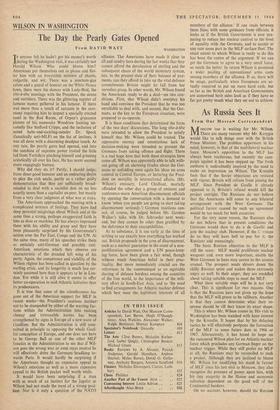 The Day the Pearly Gates Opened

IP anyone felt he hadn't got his money's worth during the Washington visit, it was certainly not Harold Wilson. Who could blame him? Americans put themselves out to please and flat- ter him with an irresistible mixture of charm, vulgarity, and wit. There was a nineteen-gun salute and a guard of honour on the White House lawn, there were the dances with Lady-Bird, the tete-a-tete meetings with the President, the sirens and outriders. There was the glittering register of famous names gathered in his honour. If there wai more than a touch of sarcasm in the cere- mony requiring him to inspect a specially erected easel in the Red Room, of Orpen's gruesome picture of his namesake Woodrow looking un- cannily like Stafford Cripps, and the inclusion of noted babe-and-suckling-minder Dr. Spock (fanatically anti-MLF) on the list of invitees, it was all done with a disarming deadpan touch. At any rate, the pearly gates had opened, and into the sunshine of supreme power trotted the little lad from Yorkshire pinching himself and grinning ecstatically all over his face. He has never seemed more engagingly human.

Why did they do it? Partly, I should judge, from sheer good humour and an endearing desire to play the rich uncle, partly as a rather guilty demonstration that they are sufficiently broad- minded to deal with a socialist don on no less courtly terms than a capitalist ex-peer, but mostly from a very clear judgment of what was at stake.

The Americans approached the meeting with a complicated mixture of feelings. They have had deep personal misgivings about Wilson and at the same time a strong, perhaps exaggerated faith in him as deus ex machina. He has always impressed them with his ability and grasp and they have been pleasantly surprised by his Government's action over the Far East, Congo and the UN. At the same time, many of his speeches strike them as certainly anti-German and possibly anti- American, emotions which they observe are characteristic of the dreaded left wing of his party. Again, the competence and viability of the Wilson regime has been called in question by the sterling crisis, and its longevity is much less cer- tainly assumed here than it appears to be in Lon- don. Yet while it is still alive it seems to offer better co-operation in mid-Atlantic initiative than its predecessors.

It is true that some of the relentlessness has gone out of the American support for MLF in recent weeks—the President's cautious instinct' not to be stampeded by either of the warring fac- tions within the Administration into making clumsy and irrevocable moves has been strengthened by signs in Europe of a new wave of Gaullism. But the Administration is still com- mitted in principle to opposing the whole Gaul- list conception of Europe, and one does not haVe to be George Ball or one of the other MLF fanatics in the Administration to see that if Wil- son goes the wrong way or even stays neutral he will effectively drive the Germans headlong to- wards Paris. It would hardly be surprising if the Americans thought an expensive appeal to Wilson's emotions as well as a more expensive appeal to the British pocket well worth while.

It would have been surprising if a man with as much of an instinct for the jugular as Wilson had not made the most of a strong posi- tion. Nor is it only a question of the NATO alliance. The Americans have made it clear to all and sundry here during the last weeks that they cannot afford the devaluation of sterling and the subsequent chaos of the world monetary system, nor, in the present state of their balance of pay- ments, can they afford to take up the vital defence commitments Britain might let fall from her nerveless grasp. In other words, Mr. Wilson found the Americans ready to do a deal—on two con- ditions. First, that Wilson didn't overplay his hand and convince the President that he was too unreliable to deal with; and second, that the Ger- mans, as the key to the European situation, were prepared to co-operate.

It is these conditions that determined the form of the two days' discussions. The long tete-a-ate were intended to allow the President to satisfy himself that Mr. Wilson could be trusted. The oppressive secrecy and ostentatious lack of decision-making were intended to prevent the Germans from taking offence and flight. There is a real hope here that both these strategies have come off. Wilson was apparently able to talk with- out going off on alarming tirades about the Ger- mans or unfolding once again his ideas on arms control in Central Europe, or lecturing the Presi- dent on morality in international affairs. (Mr. Wilson's emissary, Lord Chalfont, mortally offended the other day a group of eminent and conference-worn American disarmament officials by opening the conversation with a demand to know 'when you people are going to start taking disarmament seriously.') German reactions can- not, of course, be judged before Mr. Gordon Walker's talks with Dr. Schroeder next week- end, but they cannot be other than gratified by the deference to their susceptibilities.

As to Substance, it is too early at the time of writing to say exactly how everything has worked out. British proposals in the area of disarmament, such as a nuclear guarantee in the event of a non- proliferation agreement and a UN peace-keep- ing force, have been given a fair wind, though without much American belief in their prac- ticality. But more immediately crucial are the references in the communiqué to an equitable sharing of defence burdens among the countries of the free world, to the importance of the mili- tary effort in South-East" Asia, and to 'the need to find arrangements for Atlantic nuclear defence which best meet the legitirnate interests of all members of the alliance.' If one reads between these lines, with some guidance from officials, it looks as if the British Government is now pre- paring to reduce her nuclear control to the level of equality with the Germans, and to accept at any rate some part in the MLF surface fleet. The exact extent to which Wilson is ready to do this has been the centre of the argument. If we can get the Germans to agree to a very small force, so much the better. In return Wilson is promised a wider pooling of conventional arms costs among members of the alliance. If so. there will be snags, particularly when Europeans are ac- tually required to put up more hard cash. but so far as the British and American Governments are concerned both sides look as if they have so far got pretty much what they set out to achieve.