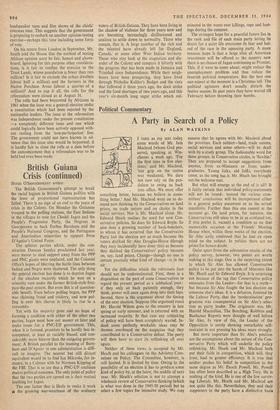 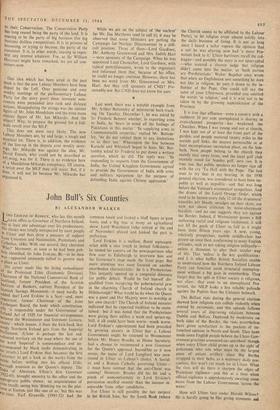 I TAKE as my text today some words of Mr. lain Macleod (whom God pre- serve), speaking at Win- chester a week ago. 'For the first time in five elec- tions,' said Mr. Macleod, 'our grip on the centre was weakened. We dare not now rely on the pen- dulum to swing us back into office. We must offer something better, because we believe in some- thing better.' And Mr. Macleod went on to de- mand new thinking by the Conservatives on land prices, on trade unions and on choice in the social services. Nor is Mr. Macleod alone. Mr. Edward Heath realises the need for new Con- servative policies. So does Sir Edward Boyle. So also does a growing number of back-benchers, to whom it has occurred that the Conservative Party lost the election not so much because the voters disliked Sir Alec Douglas-Home (though they may incidentally have done this) as because they disliked the Conservatives' policy vacuum on, say, land prices. Change—though no one is certain precisely what kind of change—is in the air.

Yet the difficulties which the reformers face should not be underestimated. First, there is a disposition on the part of some Conservatives to regard the present period as a sabbatical year: if they only sit back patiently enough, they think, power will once again drop into their laps. Second, there is the argument about the timing of the next election. Suppose (the argument runs) Mr. Harold Wilson goes to the country in late spring or early summer, and is returned with an increased majority. In that case any rethinking of policy will have been completely wasted. In- deed some perfectly workable ideas may be thrown overboard on the suspicion that they contributed to a Conservative defeat. The party will then have to start its rethinking all over again.

Neither of these views is accepted by Mr. Heath and his colleagues on the Advisory Com- mittee on Policy. The Committee, however, is still limited. It is limited by time. Owing to the possibility of an election it has to produce some kind of policy by, at the latest, the middle of next year. Mr. Heath's solution is not to attempt a wholesale review of Conservative thinking (which is what was done in the 1945-50 period) but to select a few topics for intensive study. We may assume that he agrees with Mr. Macleod about the priorities. Each subject—land, trade unions, social services and some others—will be dealt with by a study group. The fashionable word for these groups, in Conservative circles, is 'flexible.' They are prepared to accept suggestions from anyone, from ex-Ministers or from under- graduates. Young folks, old folks, everybody come, as the song has it. Mr. Heath has brought out the welcome mat.

But what will emerge at the end of it all? It is fairly certain that individual policy-statements will not be issued: instead the various com- mittees' conclusions will be incorporated either in a general policy statement or in the actual manifesto. Further than this one cannot at the moment go. On land prices, for instance, the Conservatives still seem to be in as confused (or, if you prefer it, vacant) a condition as on that memorable occasion at the Friends' Meeting House when, within three weeks of the election, Sir Alec airily confessed that he had an open mind on the subject. In politics there are no prizes for honest doubt.

Quite apart from the substantive results of the policy survey, however, two points are worth making at this stage. One is the surprising extent te which Sir Alec has allowed Conservative policy to be put into the hands of Ministers like Mr. Heath and Sir Edward Boyle. It is surprising not because of the tag that Conservative policy emanates from the Leader—for that is a myth— but because Sir Alec fought the last election on someone else's ideas. It is a delusion, fostered by the Labour Party, that the 'modernisation' pro- gramme was consequential on Sir Alec's selec- tion as party leader. The originator was Mr. Harold Macmillan. The Beeching, Robbins and Buchanan Reports were thought of well before Sir Alec. In view of this, the Leader of the Opposition is surely showing remarkable self- restraint in not pressing his ideas more strongly.

But more important than Sir Alec's position are the assumptions about the nature of the Con- servative Party which will underlie the policy rethinking. Mr. Heath and Mr. Macleod both put their faith in competition, which will, they trust, lead to greater efficiency. It is true that neither pushes his belief in competition to the same degree as Mr. Enoch Powell. Mr. Powell has often been described as a High Tory. He is nothing of the kind. He is one of the few surviv- ing Liberals. Mr. Heath and Mr. Macleod are not quite like this. Nevertheless, they and their supporters in the party have a distinctive basis to their Conservatism. The Conservative Party has long ceased being the party of the land. It is ceasing to be the party of big business (for big business dislikes competition). It is in process of becoming, or trying to become, the party of the consumer. It is, in other words, ceasing to repre- sent any interest whatever. For, as Sir William Harcourt might have remarked, we are all con- sumers now.

One idea which has been aired in the past Week is that the new Labour Members have been duped by the Left. Over pensions and over Weekly meetings of the parliamentary Labour Party (so the story goes) these innocent new- comers were persuaded into rash and disloyal actions. Manipulating the strings was the sinister figure of Mr. John Mendelson and the even more sinister figure of Mr. Ian Mikardo. And the Object? why, to prepare the ground for a full- scale revolt over the MLF.

This does not seem very likely. The new Labour Members are, by and large, a tough and sceptical lot. There is, in addition, the evidence of the line-up in the dispute over weekly meet- ings. Mr. Mikardo was against the idea; Mr. David EnnaIs, who could not be described as left-wing, was for it. There is no evidence here of a Mendelson-Mikardo conspiracy. Of course, a revolt over the MLF may still occur. But, if it does, it will not be because Mr. Mikardo has organised it.

While we are on the subject of 'the nuclear' (as Mr. Jim Matthews used to call it). it may be observed that some Ministers are putting the Campaign for Nuclear Disarmament in a diffi- cult position. Three of them—Lord Gardiner, Mr. Anthony Greenwood and Mrs. Judith Hart —were sponsors of the Campaign. When he was appointed Lord Chancellor, Lord Gardiner, with typical punctiliousness, wrote to the organisers and informed them that, because of his office, he could no longer continue. However, there has been no word from Mr. Greenwood or Mrs. Hart. Are they still sponsors of CND? Pre- sumably not. But CND does not know for sure.

Last week there was a notable example from Mr. Arthur Bottomley of ministerial back-track- ing. On Tuesday, December 1, he was asked by Sir Frederic Bennett whether, in exporting arms to India, he 'bears in mind all the feelings of Pakistanis in this matter.' In supplying arms to Commonwealth countries,' replied Mr. Bottom- ley, 'we do not subject them to any limitations as to their use.' Whereupon the line between Karachi and Whitehall began to hum. Mr. Rot- tomley asked Sir Frederic to put down a written question, which he did. The reply was: 'hi responding to requests from the Government of India, the United Kingdom Government agreed to provide the Government of India with arms and military equipment for the purpose of defending India against Chinese aggression.'