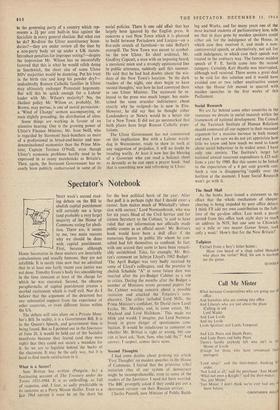 What is a Secret?

Sam Brittan has written (Penguin, 6s.) a fascinating account of The Treasury under the Tories 1951-1964. It is as enthralling, as full of suspense, and, I fear, as sadly predictable in its outcome as a Perry Mason thriller. Even as a late 1964 entrant it must be on the short list for the best political book of the year. After that puff it is perhaps right that I should enter a caveat. Sam makes much of Whitehall's 'obses- sion with secrecy.' Lord Normanbrook, who was for six years Head of the Civil Service and for sixteen Secretary to the Cabinet, 'is said to have ruled that any information not officially made public counts as an official secret.' Mr. Brittan's book would have been a dull affair if the numerous figures in public life whom he con- sulted had felt themselves so confined. In fact, with one accord they seem to have been remark- ably uninhibited. Take, for example, Mr. Brit- tan's comment on Selwyn Lloyd's 1962 Budget: The April Budget was very badly received by some of Lloyd's colleagues, and the promise to abolish Schedule "A" at some future date was inserted after the pre-Budget Cabinet as a sop to critics. During the months after the Budget a number of Ministers wrote personal papers for the Cabinet voicing concern about a possible recession and- attacked the Treasury's com- placency. The critics included Lord Mills, the Prime Minister's confidant, Sir David (now Lord) Eccles, Mr. Marples, and, to some extent, Mr. Macleod and Lord Hailsharn; This made me blink and would, I imagine, put Lord Norman- brook in grave danger of spontaneous com- bustion. It would be injudicious to comment on whether Mr. Brittan is right or wrong, but one can at least ask, 'Sam, Sam, who.told tha'?' And answer, I suspect, comes there none.