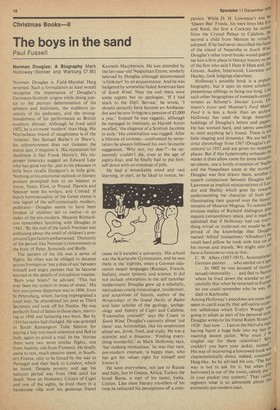 The boys in the sand

Norman Douglas: A Biography Mark Holloway (Secker and Warburg £7.90) Norman Douglas is Field-Marshal Haig reversed. Such a formulation at least would recognise the importance of Douglas's Germano-Scottish origins while doing justice to the puritan determination of his atheism and hedonism, the stubborn assiduity of his pederasty, and the strongmindedness of his performance as British eccentric abroad. Although he lived until 1952, he is no more 'modern' than Haig. His Nietzschean brand of naughtiness is of the 'nineties: like Samuel Butler's or Shaw's, his subversiveness does not threaten the status quo, it requires it. His reputation for shadiness is like Frank Harris's. His improper limericks suggest an Edward Lear who has gone too far, just as his pleasure in little boys recalls Dodgson's in little girls. Nothing in his emotional outlook or literary posture prompted him to an interest in Joyce, Yeats, Eliot, or Pound. Darwin and Spencer were his writers, and Conrad. If butch homosexuality of the Genet stamp is one signal of the self-consciously modern, pederasty--Douglas seems to have been fondest of children ten to twelve—is an index of the pre-modern. Maurice Richardson. remembers lunching with Douglas in 1943: 'By the end of the lunch Norman was enthusing about the smell of children's armpitsand lgot faintlyembarrassed.' Distinctly of the period, like Norman's commitment to the Italy of Pater, Symonds and Rolfe.

The pattern of his life was a series of flights. So often was he obliged to decamp across frontiers or 'put a slice of sea' between himself and angry parents that he became learned in the details of extradition treaties. 'Burn your boats!' he advised. 'This has ever been my system in times of stress.' His first precipitate departure was in 1896, from St Petersburg, where, having impregnated a local lady, he abandoned his post as Third Secretary and took off for Naples. He was perfectly fond of ladies in those days, marrying in 1898 and fathering two boys. But by 1916 his tastes had changed. He was arrested in South Kensington Tube Station for paying a boy too much attention and fled to Italy again to avoid a trial. In the 'thirties there were two more similar flights, one from Austria, one from Florence. He finally came to rest, much passion spent, in Southern France, only to be forced by the war to Portugal and then back to London, which he hated. Despite poverty and age his halcyon period was from 1946 until his death. Now an Honorary Citizen of Capri and one of the sights, he lived there in a handsome villa with his generous friend Kenneth Macpherson. He was attended by the ten-year-old Neapolitan Ettore, tenderly beloved by Douglas although denominated 'a little tart' by an acquaintance. And he was badgered by somewhat faded American fans of South Wind. Near the end there were some regrets but no apologies. If I had stuck to the Dipl. Service,' he wrote, 'I should certainly have become an Ambassador and be now living on a pension of £5,000 a year.' Instead he was raggedy, although he managed to maintain, as Harold Acton recalled, 'the elegance of a Scottish Jacobite in exile.' His constitution was rugged. After a lifetime of excesses—confronted by temptation he always followed his own favourite suggestion, 'Why not, my dear?'—he apparently couldn't die, even at the age of eighty-four, and he finally had to put himself down with an overdose of pills.

He had a remarkable mind and vast learning, in part, as he liked to notice, be cause he'd escaped a university. His school was the Karlsruhe Gymnasium, and he was there in the 'eighties, when a German education meant languages (Russian, French, Italian), music (piano), and science. It did not include absorption in the self (another modernism). Douglas grew up a scholarly, meticulous young mineralogist, taxidermist, and scrutiniser of lizards, author of the Herpetology of the Grand Duchy of Baden and later scholar of the geology, archaeology and history of Capri and Calabria. 'Externalise yourself!' says the Count in South Wind. Douglas's curiosity about 'out there' was Aristotelian, like his empiricism about sex, drink, food, and study. He was a scientist and a dissector. 'Finding everything wonderful,' as Mark Holloway says, 'but nothing miraculous,' he was that rare, pre-modern creature, 'a happy man, who has got his values right for himself and knows it.'

He went everywhere, not just to Russia and Italy, but to Greece, Africa, Turkey (he loved Bursa. a sign of his taste), India, Ceylon. Like most literary travellers of his time he refracted his perceptions off a com

panion. While D. H. Lawrence's was the 'Queen Bee' Frieda, his were boys like Eric and Rene, the first a Cockney he carried from the Crystal Palace to Calabria, the second a child from Menton he virtuallY adopted. If he had never described the fauna of the island of Nepenthe in South Wild' Douglas's other travel books would guaraw tee him a firm place in literary history as one of the first who said I Hate It Here and, like Graves, Auden, Isherwood, Lawrence and Huxley, took lodgings elsewhere. Holloway's amiable book is a popular biography, but it apes its more scholarlY, pretentious siblings in being too long. Like such other biographies of twentieth-centurY writers as Schorer's Sinclair Lewis, Ell' mann's Joyce and Mizener's Ford MadoS Ford it is less a book than an archive. Holloway has used the large American holdings of Douglas's letters and papers. He has worked hard, and seems unwilling to omit anything he's found. There is too little shaping and dynamics. We are led bY strict chronology from 1567 (Douglas's an' cestors) to 1952 and are given no stoPPing places. But if this hypertrophy exhausts the reader it does allow room for some leisurelY set-pieces, one a lovely evocation of Naples and the Neapolitan scene at the moment Douglas was first drawn there, another 3 superb comparison between Douglas and Lawrence as implicit reincarnations of Law dor and Shelley which goes far towards understanding the character of both Oa illuminating their quarrel over the literarY remains of Maurice Magnus. To redress the envious malice of Richard Aldington does require extraordinary space, and it must be admitted that if Holloway had cut every' thing trivial or irrelevant we would be deprived of the knowledge that Douglas named 'Alfred' (sometimes 'Alfredino') tbfi small hard pillow he took with him on al, his moves and travels. We might also 01 have a footnote so nice as this: C. W. Alters (1857-1915). Accomplished, German painter. ... who settled on Carl

sexual) immorality . . . and fled to Sar1119 where he lived down the scandal so sac' cessfully that when he returned to EuroPe no one could remember who he was. He died in Karlsruhe. kat Among Holloway's anecdotes are some seem to catch exactly that self-satiric eccerr tric selfishness which Evelyn Waugh was going to adopt as part of his personal stYle' Douglas writes to his friend Ralph Straus

maining decent jacket. Why must / be, singled out for these calamities? W,ble couldn't you burn your jacket, insteaa .5 His way of recovering a borrowed book %vat characteristically direct, indeed, somewhat Haig-like. As he advised his son, 'The hese way is not to ask for it, but when Pt borrower] is out of the room, calmly Put:, in your pocket (my system).' That cabill:! registers what is so admirable about thi' eminently pre-modern man.