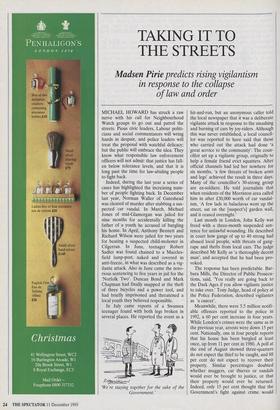 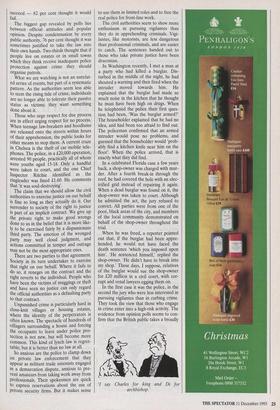 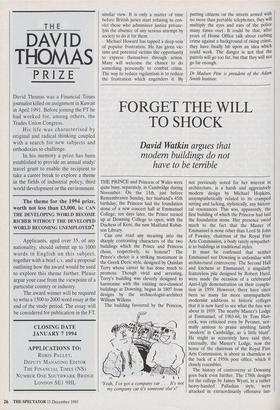 TAKING IT TO THE STREETS

MICHAEL HOWARD has struck a raw nerve with his call for Neighbourhood Watch groups to go out and patrol the streets. Pious civic leaders, Labour politi- cians and social commentators will wring hands in despair, and police leaders will treat the proposal with watchful delicacy; but the public will embrace the idea. They know what responsible law enforcement officers will not admit: that justice has fall- en below tolerance levels, and that it is long past the time for law-abiding people to fight back.

Indeed, during the last year a series of cases has highlighted the increasing num- ber of people fighting back. In December last year, Norman Waller of Gateshead was cleared of murder after stabbing a sus- pected car vandal. In March, Michael Jones of mid-Glamorgan was jailed for nine months for accidentally killing the father of a youth he accused of burgling his home. In April, Anthony Bennett and Richard Wilson were jailed for two years for beating a suspected child-molester in Cilgerran. In June, teenager Robert Sadler was found chained to a Maccles- field lamp-post, naked and covered in anti-freeze, in what was described as a vig- ilante attack. Also in June came the noto- rious sentencing to five years in jail for the `Norfolk Two'. Duncan Bond and Mark Chapman had finally snapped at the theft of three bicycles and a power tool, and had briefly imprisoned and threatened a local youth they believed responsible.

In July came reports of a Swansea teenager found with both legs broken in several places. He reported the event as a 'We're staying together for the sake of the Government.' hit-and-run, but an anonymous caller told the local newspaper that it was a deliberate vigilante attack in response to the smashing and burning of cars by joy-riders. Although this was never established, a local council- lor was reported to have said that those who carried out the attack had done 'a great service to the community'. The coun- cillor set up a vigilante group, originally to help a female friend evict squatters. After official channels had led her nowhere for six months, 'a few threats of broken arms and legs' achieved the result in three days. Many of the councillor's 30-strong group are ex-soldiers. He told journalists that when residents of the Morriston area called him in after £30,000 worth of car vandal- ism, 'A few lads in balaclavas went up the street, sat on the [suspect's] garden wall, and it ceased overnight.'

Last month in London, John Kelly was freed with a three-month suspended sen- tence for unlawful wounding. He described in court how gangs of up to 40 strong had abused local people, with threats of gang- rape and thefts from local cars. The judge described Mr Kelly as 'a thoroughly decent man', and accepted that he had been pro- voked.

The response has been predictable. Bar- bara Mills, the Director of Public Prosecu- tions, said, 'You really are going back to the Dark Ages if you allow vigilante justice to take over.' Tony Judge, head of policy at the Police Federation, described vigilantes as 'a cancer'.

Meanwhile, there were 5.5 million notifi- able offences reported to the police in 1992, a 60 per cent increase in four years. While London's crimes were the same as in the previous year, arrests were down 15 per cent. Nationally, one in four people reports that his house has been burgled at least once, up from 11 per cent in 1980. A poll at the end of August showed three-quarters do not expect the thief to be caught, and 88 per cent do, -not expect to recover their property. Similar percentages doubted whether muggers, car thieves or vandals would ever be brought to justice, or that their property would ever be returned. Indeed, only 15 per cent thought that the Government's fight against crime would

succeed — 82 per cent thought it would fail.

The biggest gap revealed by polls lies between official attitudes and popular opinion. Despite condemnation by every public authority, 76 per cent thought it was sometimes justified to take the law into their own hands. Two-thirds thought that if people live on estates or in small towns which they think receive inadequate police protection against crime they should organise patrols. What we are watching is not an unrelat- ed series of events, but part of a systematic pattern. As the authorities seem less able to stem the rising tide of crime, individuals are no longer able to tolerate their passive status as victims; they want something done about it.

Those who urge respect for due process are in effect urging respect for no process. When teenage law-breakers and hoodlums are released onto the streets within hours of their apprehension, the public looks for

other means to stop them. A current craze

in Chelsea is the theft of car mobile tele- phones. The police, in a £20,000 operation, arrested 90 people, practically all of whom were youths aged 15-18. Only a handful were taken to court, and the one Chief Inspector Ritchie identified as the ringleader was fined £1.60. He comments that 'it was soul-destroying'. The claim that we should allow the civil authorities to exercise justice on our behalf is fine so long as they actually do it. Our surrender to society of the right to justice is part of an implicit contract. We give up the private right to make good wrongs done to us in the belief that it is more like- ly to be exercised fairly by a dispassionate third party. The emotion of the wronged party may well cloud judgment, and actions committed in temper and outrage may not be the most appropriate ones. There are two parties to that agreement. Society in its turn undertakes to exercise that right on our behalf. Where it fails to do so, it reneges on the contract and the right reverts to the individual. People who have been the victims of muggings or theft and have seen no justice can only regard the official authorities as a defaulting party to that contract.

Unpunished crime is particularly hard in close-knit villages or housing estates, where the identity of the perpetrators is often known. The spectacle of hundreds of villagers surrounding a house and forcing the occupants to leave under police pro- tection is not new, but will become more common. This kind of lynch law is regret- table; but it is better than no law at all.

So anxious are the police to clamp down on private law enforcement that they appear as militant trade unionists engaged in a demarcation dispute, anxious to pre- vent amateurs from taking work away from professionals. Their spokesmen are quick to. express reservations about the use of private security firms. But it makes sense

to use them in limited roles and to free the real police for front-line work.

The civil authorities seem to show more enthusiasm in pursuing vigilantes than they do in apprehending criminals. Vigi- lantes, like motorists, are less dangerous than professional criminals, and are easier to catch. The sentences handed out to those who take private justice have been draconian.

In Washington recently, I met a man at a party who had killed a burglar. Dis- turbed in the middle of the night, he had shouted a warning and then fired when the intruder moved towards him. He explained that the burglar had made so much noise in the kitchen that he thought he must have been high on drugs. When he telephoned the police their first ques- tion had been, Was the burglar armed?' The householder explained that he had no idea, and had been too afraid to find out. The policeman confirmed that an armed intruder would pose no problems, and guessed that the householder would 'prob- ably find a kitchen knife near him on the floor'. When the police arrived, that is exactly what they did find.

In a celebrated Florida case a few years back, a shop-owner was charged with mur- der. After a fourth break-in through the roof, he had covered the hole with an elec- trified grid instead of repairing it again. When a dead burglar was found on it, the shop-owner was taken to court. Although he admitted the act, the jury refused to convict. All parties were from one of the poor, black areas of the city, and members of the local community demonstrated on behalf of the shop-owner throughout the trial.

When he was freed, a reporter pointed out that, if the burglar had been appre- hended, he would not have faced the death sentence 'which you imposed upon him'. 'He sentenced himself,' replied the shop-owner. 'He didn't have to break into my shop.' These days, I suppose, relatives of the burglar would sue the shop-owner for £20 million in a civil court, with cor- rupt and venal lawyers egging them on.

In the first case it was the police, in the second the jury who were less interested in pursuing vigilantes than in curbing crime. They took the view that those who engage in crime enter into a high-risk activity. The evidence from opinion polls seems to con- firm that the British public takes a broadly '1 say Charles for king and Di for archbishop.' similar view. It is only a matter of time before British juries start refusing to con- vict those who administer justice private- lyin the absence of any serious attempt by society to do it for them.

Michael Howard has tapped a deep vein of popular frustration. He has given vic- tims and potential victims the opportunity to express themselves through action. Many will welcome the chance to do something personally to combat crime. The way to reduce vigilantism is to reduce the frustration which engenders it. By putting citizens on the streets armed with no more than portable telephones, they will multiply the eyes and ears of the police many times over. It could be that, after years of Home Office talk about curbing crime against a background of rising crime, they have finally hit upon an idea which could work. The danger is not that the patrols will go too far, but that they will not go far enough.

Dr Madsen Pirie is president of the Adam Smith Institute.