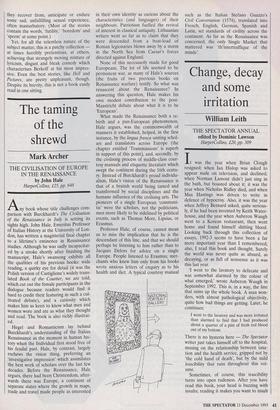 The taming of the shrewd

THE CIVILISATION OF EUROPE IN THE RENAISSANCE by John Hale HarperCollins, £25, pp. 648 Any book whose title challenges com- parison with Burckhardt's The Civilisation of the Renaissance in Italy is setting its sights high. John Hale, Emeritus Professor of Italian History at the University of Lon- don, has written a magisterial final chapter to a lifetime's eminence in Renaissance studies. Although he was sadly incapacitat- ed by a stroke shortly after finishing the manuscript, Hale's swansong exhibits all the qualities of his previous books: wide reading, a quirky eye for detail (it was the Polish version of Castiglione's widely trans- lated Book of the Courtier, we are told, which cut out the female participants in the dialogue because readers would find it hard to credit their featuring in such a cul- tivated debate), and a curiosity which makes him as keen to know what men and women wore and ate as what they thought and read. The book is also richly illustrat- ed.

Hegel and Romanticism lay behind Burckhardt's understanding of the Italian Renaissance as the moment in human his- tory when the Individual first stood free of his feudal past. Hale, by contrast, largely eschews the vision thing, preferring an `investigative impression' which assimilates the best work of scholars over the last few decades. Before the Renaissance, Hale argues, there had been Christendom, after- wards there was Europe, a continent of separate states where the growth in maps, trade and travel made people as interested in their own identity as curious about the characteristics (and languages) of their neighbours. Patriotism fuelled the revival of interest in classical antiquity. Lithuanian writers went so far as to claim that they were descended from a boat-load of Roman legionaries blown away by a storm in the North Sea from Caesar's forces directed against England.

None of this necessarily made for good Europeans. The lot of life seemed to be permanent war, as many of Hale's sources (the fruits of two previous books on Renaissance warfare) testify. So what was renascent about the Renaissance? In answering this question, Hale makes his own modest contribution to the post- Maastricht debate about what it is to be `European'.

What made the Renaissance both a re- birth and a pan-European phenomenon, Hale argues, was the commonwealth of manners it established, helped, in the first instance, by the lingua franca uniting schol- ars and translators across Europe (the chapter entitled 'Transmissions' is superb in support of this point), and, secondly, by the civilising process of middle-class cour- tesy manuals and etiquette literature which swept the continent during the 16th centu- ry. Instead of Burckhardt's proud individu- alism, Hale's vision of the Renaissance is that of a brutish world being tamed and transformed by social disciplines and the humane influence of the civilising arts. The pioneers of a single European `communi- tie' were the scholars, not the politicians, men more likely to be sidelined by political events, such as Thomas More, Lipsius, or Erasmus.

Professor Hale, of course, cannot mean us to miss the implication that he is the descendant of this line, and that we should perhaps be listening to him rather than to Jacques Delors for advice on a single Europe. People listened to Erasmus; mer- chants who knew him only from his books wrote anxious letters of enquiry as to his health and diet. A typical courtesy manual

such as the Italian Stefano Guazzo's Civil Conversation (1574), translated into French, English, German, Spanish and Latin, set standards of civility across the continent. As far as the Renaissance was concerned, the only Single Market that mattered was `thintertraffique of the minde'.