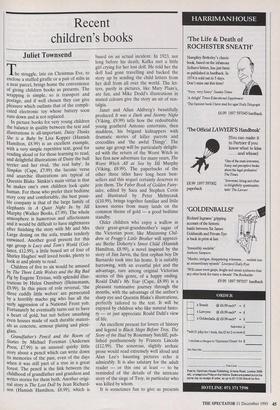 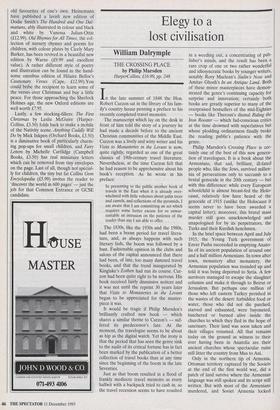 The struggle, late on Christmas Eve, to enclose a stuffed giraffe or a pair of stilts in a neat parcel, brings home the convenience of giving children books as presents. The wrapping is simple, so is transport and postage, and if well chosen they can give pleasure which outlasts that of the compli- cated electronic toy whose battery soon runs down and is not replaced. In picture books for very young children the balance in quality between the text and illustrations is all-important. Daisy Thinks She is a Baby by Lisa Kopper (Hamish Hamilton, £8.99) is an excellent example, with a very simple repetitive text, good for reading aloud or for those learning to read, and delightful illustrations of Daisy the bull terrier and her rival, 'the real baby'. In Simpkin (Cape, £7.99) the laconic verse and anarchic illustrations are typical of Quentin Blake. Simkin's main virtue is that he makes one's own children look quite human. For those who prefer their bedtime Story cosy and comfortable, the best possi- ble company is that of the large family of elephants in A Quiet Night In by Jill Murphy (Walker Books, £7.99). The whole atmosphere is humorous and affectionate and it would be difficult to have nightmares after finishing the story with Mr and Mrs Large dozing on the sofa, trunks tenderly entwined. Another good present for this age group is Lucy and Tom's World (Gol- lancz, £12.99), a little boxed set of four of Shirley Hughes' well loved books, plenty to look at and plenty to read. Children of five to six would be amused by The Three Little Wolves and the Big Bad Pig by Eugene Trivisas, with splendid illus- trations by Helen Oxenbury (Heinemann, £9.99). In this piece of role reversal, 'the three cuddly little wolves' are persecuted by a horribly macho pig who has all the surly aggression of a National Front yob. Fortunately he eventually turns out to have a heart of gold, but not before smashing even houses made of such durable materi- als as concrete, armour plating and plod- glass.

Grandfather's Pencil and the Room of Stories by Michael Foreman (Andersen Press, £7.99) is an unusual quirky little story about a pencil which can write down its memories of the past, even of the days when it was still part of a tree in a great forest. The pencil is the link between the childhood of grandfather and grandson and writes stories for them both. Another origi- nal story is The Lost Doll by Jean Richard- son (Hamish Hamilton, £8.99), which is based on an actual incident. In 1923, not long before his death, Kafka met a little girl crying for her lost doll. He told her the doll had gone travelling and backed the story up by sending the child letters from her doll from all over the world. The let- ters, partly in pictures, like Mary Plain's, are fun, and Mike Dodd's illustrations in muted colours give the story an air of nos- talgia.

Janet and Allan Ahlberg's beautifully produced It was a Dark and Stormy Night (Viking, £9.99) tells how the redoubtable young goatherd Antonio entertains, then maddens, his brigand kidnappers with dramatic stories of killer parrots and crocodiles and 'the awful Thingy'. The same age group will be particularly delight- ed with the return of the Worst Witch in her first new adventure for many years, The Worst Witch All at Sea by Jill Murphy (Viking, £8.99). The paperbacks of the other three titles have long been best- sellers and this sequel certainly deserves to join them. The Faber Book of Golden Fairy- tales, edited by Sara and Stephen Corin and illustrated by Peter Melnyczuk (£10.99), brings together familiar and little known stories from many lands on the common theme of gold — a good bedtime standby.

Older children who enjoy a wallow in their great-great-grandmother's sagas of the Victorian poor, like Ministering Chil- dren or Froggy's Little Brother will appreci- ate Berlie Doherty's Street Child (Hamish Hamilton, £8.99), a novel inspired by the story of Jim Jarvis, the first orphan boy Dr Barnardo took into his home. It is suitably harrowing, with an eventful plot and the advantage, rare among original Victorian stories of this genre, of a happy ending. Roald Dahl's My Year (Cape, £8.99) is a pleasant ruminative journey through the months, with the advantage of the author's sharp eye and Quentin Blake's illustrations, perfectly tailored to the text. It will be enjoyed by children who like natural histo- ry — or just appreciate Roald Dahl's view of life.

An excellent present for lovers of history and legend is Black Ships Before Troy, The Story of the Iliad by Rosemary Sutcliff, pub- lished posthumously by Frances Lincoln (£12.99). The sonorous, slightly archaic prose would read extremely well aloud and Alan Lee's haunting pictures echo it admirably. It is also salutary for the adult reader — or this one at least — to be reminded of the details of the intricate story of the siege of Troy, in particular who was killed by whom.

It is sometimes fun to give as presents

old favourites of one's own. Heinemann have published a lavish new edition of Dodie Smith's The Hundred and One Dal- matians, ably illustrated in colour and black and white by Vanessa Julian-Ottie (£12.99). Old Rhymes for All Times, the col- lection of nursery rhymes and poems for children, with colour plates by Cicely Mary Barker, has been revived in a beautiful new edition by Warne (£9.99 and excellent value). A rather different style of poetry and illustration can be found in the hand- some omnibus edition of Hilaire Belloc's Cautionary Verses (Cape, £12.99).You could bribe the recipient to learn some of the verses over Christmas and buy a little peace. For those approaching the Sherlock Holmes age, the new Oxford editions are well worth £7.95.

Lastly, a few stocking-fillers: The First Christmas by Leslie McGuire (Harper- Collins, £3.50) folds back to make a mobile of the Nativity scene. Anything Cuddly Will Do by Mick Inkpen (Orchard Books, £3.50) is a diminutive book of particularly charm- ing pop-ups for small children, and Fairy Letters by Michelle Cartlidge (Campbell Books, £3.50) has real miniature letters which can be removed from tiny envelopes on the page. Last of all, though not special- ly for children, the tiny but fat Collins Gem Encyclopedia (£5.99) invites the reader to `discover the world in 600 pages' — just the job for that Common Entrance or GCSE candidate.