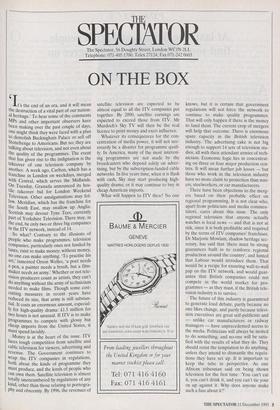 t's the end of an era, and it will mean the destruction of a vital part of our nation- al heritage: To hear some of the comments MPs and other important observers have been making over the past couple of days, one might think they were faced with a plan to demolish Buckingham Palace or sell off Stonehenge to Americans. But no; they are talking about television, and not even about the quality of the programmes. The event that has given rise to the indignation is the takeover of one television company by another. A week ago, Carlton, which has a franchise in London on weekdays, merged With Central, which serves the Midlands. On Tuesday, Granada announced its hos- tile takeover bid for London Weekend Television. Other amalgamations may fol- low. Meridian, which has the franchise for the South East, may swallow up Anglia. Scottish may devour Tyne Tees, currently part of Yorkshire Television. There may, in the end, be only two or three big companies in the ITV network, instead of 14. So what? Contrary to the illusions of people who make programmes, television companies, particularly ones not funded by taxes, exist to make money; without money, no one can make anything. 'To practise his art,' lamented Orson Welles, 'a poet needs a pen, a painter needs a brush, but a film- maker needs an army.' Whether or not tele- vision producers count as artists, they can't do anything without the army of technicians needed to make films. Though some cost- cutting measures in recent years have reduced its size, that army is still substan- tial. It costs an enormous amount, especial- ly for high-quality drama: £1.5 million for two hours is not unusual. If ITV is to make Programmes to compete with glossy but cheap imports from the United States, it must spend lavishly.

Money is at the heart of the issue. ITV faces tough competition from satellite and cable television for viewers, advertising and revenue. The Government continues to wrap the ITV companies in regulations, both about the kinds of programme they must produce, and the kinds of people who can own them. Satellite television is almost totally unencumbered by regulations of any kind, other than those relating to pornogra- phy and obscenity. By 1996, the revenues of satellite television are expected to be almost equal to all the ITV companies put together. By 2000, satellite earnings are expected to exceed those from ITV. Mr Murdoch's Sky TV will then be the real licence to print money and exert influence.

Whatever its consequences for the con- centration of media power, it will not nec- essarily be a disaster for programme quali- ty. In America, many of the most interest- ing programmes are not made by the broadcasters who depend solely on adver- tising, but by the subscription-funded cable networks. In five years time, when it is flush with cash, Sky may start producing high- quality drama; or it may continue to buy in cheap American imports.

What will happen to ITV then? No one

knows, but it is certain that government regulations will not force the network to continue to make quality programmes. That will only happen if there is the money to fund them. The current crop of mergers will help that outcome. There is enormous spare capacity in the British television industry. The advertising cake is not big enough to support 14 sets of television stu- dios, all with their attendant armies of tech- nicians. Economic logic lies in concentrat- ing on three or four major production cen- tres. It will mean further job losses — but those who work in the television industry have no more claim to protection than min- ers, steelworkers, or car manufacturers.

There have been objections to the merg- ers based on their probable effect on regional programming. It is not clear who, apart from politicians and media commen- tators, cares about this issue. The only regional television that anyone actually watches is local news — and that is not at risk, since it is both profitable and required by the terms of ITV companies' franchises. Dr Marjorie Mowlam, shadow heritage sec- retary, has said that 'there must be strong guarantees built in to reinforce regional production around the country', and hinted that Labour would introduce them. That would be a recipe for ensuring wall-to-wall pap on the ITV network, and would guar- antee that British companies could not compete in the world market for pro- grammes — as they must, if the British tele- vision industry is to survive.

The future of this industry is guaranteed to generate loud debate, partly because no one likes change, and partly because televi- sion executives are great self-publicists and — unlike car manufacturers or railway managers — have unprecedented access to the media. Politicians will always be invited to do something, and no-one will be satis- fied with the results of what they do. They should resist the temptation to do anything, unless they intend to dismantle the regula- tions they have set up. It is important to keep the tube in perspective. As one African tribesman said on being shown television for the first time: 'You can't eat it, you can't drink it, and you can't tie your ox up against it. Why does anyone make such a fuss about it?'