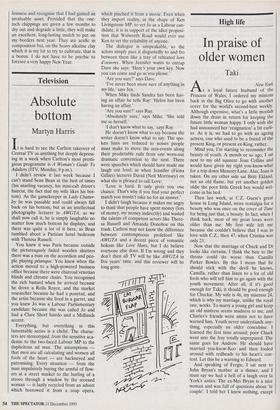 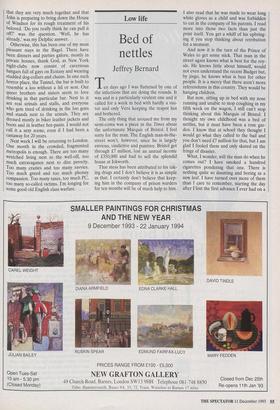 In praise of older women

New York s a loyal future husband of the Princess of Wales, I ordered my minions back in the Big Olive to go with another cover for the world's second-best weekly. Although expensive, what's a little moolah down the drain in return for keeping the future little woman happy. I only wish she had announced her 'resignation' a bit earli- er. As it is, we had to go with an ageing actress, one who used to be a friend of the present King, or present ex-King, rather. Mind you, I'm starting to reconsider the beauty of youth. A month or so ago, I sat next to my old squeeze Joan Collins and would have given my right you-know-what for a trip down Memory Lane. Alas, Joan is taken. On my other side sat Britt Ekland, not an old flame, but yet another golden oldie the poor little Greek boy would wel- come in his bed.

Then last week, at C.Z. Guest's great house in Long Island, more nostalgia for a beauty who was once on the cover of Time for being just that, a beauty. In fact, when think back, most of my great loves were older than me. My first wife left me because she couldn't believe that I was in love with C.Z., then 47, when Cristina was only 23.

Now that the marriage of Chuck and Di looks like curtains, I think the heir to the throne could do worse than Camilla Parker Bowles. By this I mean that he should stick with the devil he knows, Camilla, rather than listen to a lot of old fools who will tell him to go again with the youth movement. After all, if it's good enough for Taki, it should be good enough for Chuckle. My wife is 46, my mistress 24, which is why my marriage, unlike the royal one, works. To many a young girl and keep an old mistress seems madness to me, and Charles's friends were amiss not to have warned him. Youth never understands any- thing, especially an older concubine. I learned the first time around; poor Chuck went into the fray totally unprepared. The same goes for Andrew. He should have married you-know-Koo and then fooled around with redheads to his heart's con- tent. Let this be a warning to Edward.

And speaking of Fergie, I sat next to John Bryan's mother at a dinner, and I must say we had a hell of a laugh over la York's antics. The ex-Mrs Bryan is a nice woman and was full of questions about 'le couple'. I told her I knew nothing, except

that they are very much together and that John is preparing to bring down the House of Windsor for its rough treatment of his beloved. 'Do you really think he can pull it off?' was the question. 'Well, he has already,' was my Delphic answer. Otherwise, this has been one of my most pleasant stays in the Bagel. There have been dinners and parties galore, mostly in private houses, thank God, as New York night-clubs now consist of cavernous hangars full of gays on Ecstasy and wearing studded dog-collars and chains. In one such horror place, the Tunnel, the bar is built to resemble a loo without a lid or seat. Our queer brothers and sisters seem to love drinking in that particular bar. Next to it are real urinals and stalls, and everyone who gets tired of drinking in the loo goes and stands next to the urinals. They are dressed mostly in biker leather jackets and boots and in leather hot-pants. I would not call it a sexy scene, even if I had been a castaway for 20 years. Next week I will be returning to London. One month in the crowded, fragmented metropolis is enough. There are too many wretched living next to the well-off, too much extravagance next to dire poverty. Too many crazies and too many sawies. Too much greed and too much phoney compassion. Too many taxes, too much PC, too many so-called victims. I'm longing for some good old English class warfare.