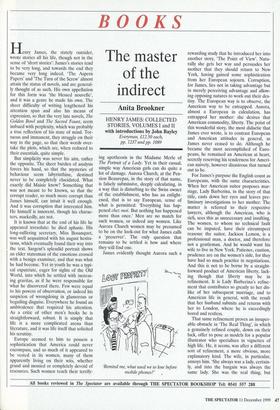 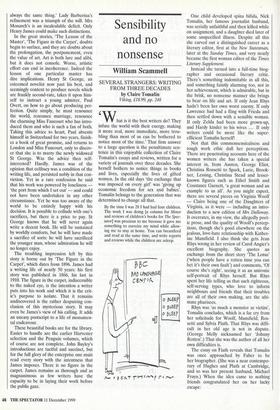 The master of the indirect

Henry James, the stately outsider, wrote stories all his life, though not in the sense of 'short stories': James's stories tend to be very long, and towards the end they became very long indeed. The Aspern Papers' and 'The Turn of the Screw' almost attain the status of novels, and are general- ly thought of as such. His own appellation for this form was 'the blessed nouvelle', and it was a genre he made his own. The sheer difficulty of writing lengthened his attention span and also his means of expression, so that the very late novels, The Golden Bowl and The Sacred Fount, seem imbued with perplexity, which was probably a true reflection of his state of mind. Tor- tuous and immanent, they struggle on their way to the page, so that their words over- take the plots, which are, when reduced to their essentials, quite simple.

But simplicity was never his aim, rather the opposite. The sheer burden of analysis forces his hand, so that the mysteries of behaviour seem labyrinthine, destined never to be completely elucidated. What exactly did Maisie know? Something that was not meant to be known, so that the corrupt reader, so much more corrupt than James himself, can intuit it well enough. And it was corruption that interested him. He himself is innocent, though his charac- ters, markedly, are not.

It is known that at the end of his life he appeared irresolute: he died aphasic. His long-suffering secretary, Miss Bosanquet, was well acquainted with his august hesita- tions, which eventually found their way into the text. Sargent's splendid portrait shows an elder statesman of the emotions crossed with a benign examiner, and that was what he had become. Yet in youth he was a typi- cal expatriate, eager for sights of the Old World, into which he settled with increas- ing gravitas, as if he were responsible for what he discovered there. Few were equal to his powers of observation, or indeed his suspicion of wrongdoing in glamorous or beguiling disguise. Everywhere he found an ambivalence that required his attention. As a critic of other men's books he is straightforward, robust. It is simply that life is a more complicated arena than literature, and it was life itself that solicited his scrutiny.

Europe seemed to him to possess a sophistication that America could never encompass, and so much of it appeared to be vested in its women, many of them apparently living on their wits, whether grand and monied or completely devoid of resources. Such women reach their terrify- ing apotheosis in the Madame Merle of The Portrait of a Lady. Yet in their casual, simple way American girls can do quite a lot of damage. Aurora Church, at the Pen- sion Beaurepas, in the story of that name, is falsely submissive, deeply calculating, in a way that is disturbing to the Swiss owner of the establishment, who has an enlight- ened, that is to say European, sense of what is permitted: 'Everything has hap- pened chez moi. But nothing has happened more than once.' Men are no match for such women, or indeed any women. Like Aurora Church women may be presumed to be on the look-out for what James calls a 'preserver'. The only question that remains to be settled is how and where they will find one.

James evidently thought Aurora such a 'Remind me, what used we to lose before mobile phones?' , rewarding study that he introduced her into another story, 'The Point of View'. Natu- rally she gets her way and persuades her mother that they should return to New York, having gained some sophistication from her European sojourn. Corruption, for James, lies not in taking advantage but in merely perceiving advantage and allow- ing opposing natures to work out their des- tiny. The European way is to observe, the American way to be entrapped. Aurora, almost a European in calculation, has entrapped her mother: she desires that American commodity, liberty. The point of this wonderful story, the most didactic that James ever wrote, is to contrast European and American attitudes in general, as James never ceased to do. Although he became the most accomplished of Euro- peans, he remained an American at heart, secretly reserving his tenderness for Ameri- can naivety, however disastrous that turned out to be.

For James's purpose the English count as Europeans, with the same characteristics. When her American suitor proposes mar- riage, Lady Barberina, in the story of that title, casts down her eyes and leaves pre- liminary investigations to her mother. The matter is referred to their respective lawyers, although the American, who is rich, sees this as unnecessary and insulting. The women, to whom no technical fault can be imputed, have their circumspect reasons: the suitor, Jackson Lemon, is a professional man, a doctor, and therefore not a gentleman. And he would want his wife to live in New York. Patience, caution, prudence are on the women's side, for they have had so much practice in negotiations. And this is not to be borne by a straight- forward product of American liberty, lack- ing though that liberty may be in refinement. It is Lady Barberina's refine- ment that contributes so greatly to her dis- like of her subsequent marriage, and to American life in general, with the result that her husband submits and returns with her to London, where he is exceedingly bored and restless.

That same refinement proves an insuper- able obstacle in 'The Real Thing', in which a genuinely refined couple, down on their luck, offer to pose as models for a popular illustrator who specialises in vignettes of high life. He, it seems, was after a different sort of refinement, a more obvious, more explanatory kind. The wife, in particular, annoys him. 'She always was a lady, certain- ly, and into the bargain was always the same lady. She was the real thing, but always the same thing.' Lady Barberina's refinement was a triumph of the will. Mrs Monarch's is an incalculable deficit. Only Henry James could make such distinctions.

In the great stories, 'The Lesson of the Master', The Figure in the Carpet', doubts begin to surface, and they are doubts about the prolongation, the postponement, even the value of art. Art is both lure and alibi, but it does not console. Worse, artistic effort can end in incoherence. Indeed the lesson, of one particular master has dire implications. Henry St George, an esteemed novelist now past his best, and seemingly content to produce novels which are franldy second-rate, takes it upon him- self to instruct a young admirer, Paul Overt, on how to go about producing per- fection. Quite simply, he must renounce the world, renounce marriage, renounce the charming Miss Fancourt who has intro- duced them and who is such a fan of both. Taking this advice to heart, Paul absents himself in Switzerland for two years, finish- es a book of great promise, and returns to London and Miss Fancourt, only to discov- er that she is to marry the newly widowed St George. Was the advice then self- interested? Hardly. James was of the opinion that celibacy was a condition of the writing life, and persisted nobly in that con- viction. Yet in a rare confession he said that his work was powered by loneliness 'the port from which I set out' — and could not have been undertaken in any other circumstance. Yet he was too aware of the world to be entirely happy with his decision. It is possible to collude with one's sacrifices, but there is a price to pay. St George knows that he will never again write a decent book. He will be sustained by worldly comforts, but he will have made a sacrifice of sorts: he will have sacrificed the younger man, whose admiration he will no longer enjoy.

The troubling impression left by this story is borne out by 'The Figure in the Carpet', which dates from 1896. James had a writing life of nearly 50 years: his first story was published in 1866, his last in 1910. The figure in the carpet, indiscernible to the naked eye, is the intention a writer puts into his work and which it is the crit- ic's purpose to isolate. That it remains undiscovered is the rather despairing con- clusion of this mysterious story. It may even be James's view of his calling. It adds an uneasy postscript to a life of monumen- tal endeavour.

These beautiful books are for the library. Easier to handle are the earlier Harvester selection and the Penguin volumes, which of course are not complete. John Bayley's introductions are tactful and succinct, but for the full glory of the enterprise one must read every story with the intentness that James imposes. There is no figure in the carpet. James remains as thorough and as magnanimous as few writers have the capacity to be in laying their work before the public gaze.