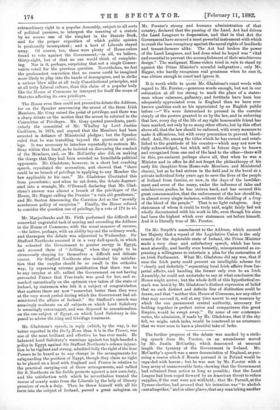 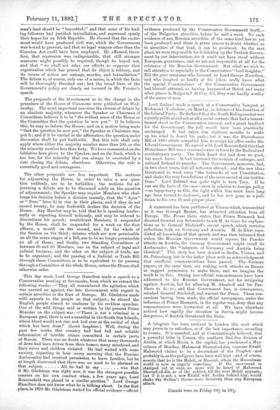 The further progress of the debate was marked by a

strik- ing speech from Mr. Forster, on an amendment moved by Mr. Justin McCarthy, which denounced at unusual length the tyranny of the Government in Ireland. Mr. McCarthy's speech was a mere denunciation of England, as pur- suing a course which if Russia pursued it in Poland would be regarded with horror ; but he was met by Mr. Forster with a long array of unanswerable facts, showing that the Government had refrained from action as long as possible ; that the Land League had been urged forward by an American threat to refuse supplies, if the rent were not withheld ; that Mr. Parnell, at the Tyrone election, had avowed that his intention was " to abolish rent altogether," and in other places, that any man taking another man's land should be " boycotted ;" and that some of his lead- ing followers had justified intimidation, and expressed openly their hopes for an Irish Republic. He showed that the excite- ment would have produced civil war, which the Government was bound to prevent, and that no legal weapon other than the Coercion Act could have been employed. He affirmed, there- fore, that repression was indispensable, that still stronger measures might possibly be required, though be hoped not, and that " we shall not relax our efforts to suppress that -organisation which has proved that its object is robbery, and its means of action are outrage, murder, and intimidation." The debate is, of course, only one of a series, in which the facts will be thoroughly threshed out ; but the broad lines of the Government's policy are clearly set forward in Mr. Forster's speech.