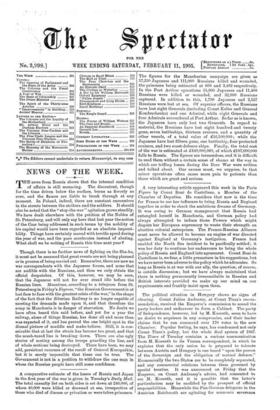 Page 1, 11 February 1905 — A very interesting article appeared this week in the Paris
Close

A very interesting article appeared this week in the Paris

Figaro by Count Boni de Castellane, a Member of the Chamber of Deputies. He considers that now is the time for France to use her influence to bring Russia and England together in order to check the ambitious dreams of Germany. It was owing to German management that Russia had entangled herself in Manchuria, and German policy had always attempted to induce those Powers which might dispute ber European supremacy to waste their strength on abortive colonial enterprises. The Franco-Russian Alliance must never be allowed to become an engine of war directed against England at Germany's instigation. France had enabled the North Sea incident to be pacifically settled ; it was her duty to continue her endeavours to bring the whole policy of Russia and England into agreement. Count Boni de Castellano is, we fear, a little premature in his suggestions, but we have never been adverse to the policy which he advocates. So long as Russia is at war with our ally, the question, of course, is outside discussion; but we have always maintained that there is nothing permanently irreconcilable in Russian and British interests provided we make up our mind on our requirements and frankly insist upon them.