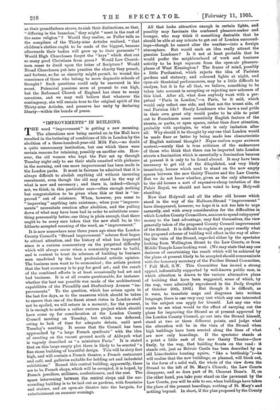 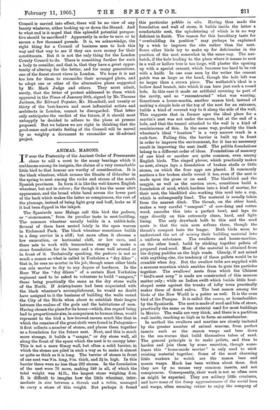 T HE word " improvement " is getting a new meaning.

The alterations now being carried on in the Mall have resulted in the bettering of conditions of life in London by the abolition of a three-hundred-year-old Milk Fair,—no doubt a quite unnecessary institution, but one which there were certain reasons for retaining, possibly on another site. How- ever, the old women who kept the Fair sat up through Tuesday night only to see their stalls smashed with pickaxes in the morning, and one more improvement has been made in the London parks. It must in fairness be admitted that it is always difficult to abolish anything old without incurring resentment, even though the old may stand in the way of what is new and necessary ; and there is, indeed—though not, we think, in this particular case—often enough nothing but congratulation to be given when this or that is " im- proved " out of existence. When, however, you come to " improving " anything into existence ; when your "improve- ments" necessitate creation after abolition, and the pulling down of what may have been bad in order to substitute some- thing presumably better, one thing is plain enough, that there ought to be every care taken that the new shall be, in the hitherto accepted meaning of the word, an " improvement."

It is now somewhere near three years ago since the London County Council's "Strand improvement" scheme first began to attract attention, and the history of what has happened since is a curious commentary on the perpetual difficulty which will always occur when a community wants to build, and is content to trust its schemes of building to business men unadvised by the best professional artistic opinion. The business men want to be economical ; the artists protest that the best economy is to pay for good art ; and the result of the combined efforts is at least occasionally bad art and bad business. It is at all events questionable, for instance whether the best use possible was made of the architectural capabilities of the Piccadilly and Shaftesbury Avenue " im- provements." To the question, which has arisen again in the last few days, as to the measures which should be taken to ensure that one of the finest street vistas in London shall not be spoiled, we will return in a moment; for the present, it is enough to notice a rather curious project which should have come up for consideration at the London County Council meeting on Tuesday, but which was deferred, owing to lack of time for adequate debate, until next Tuesday's meeting. It seems that the Council has been approached by " a large French syndicate" with the idea of erecting on the vacant ground north of Aldwych what is vaguely described as "a miniature Paris." It is stated that on this large empty plot there is likely to be erected "a. fine stone building of beautiful design. This will be sixty feet high, and will contain a French theatre, a French restaurant and café, and galleries suitable for holding art and industrial exhibitions." Round this central building, apparently, there are to be French shops, which will be occupied, it is hoped, by French jewellers, milliners, confectioners, and the rest. The space intervening between the central shops and the sur- rounding building is to be laid out as gardens, with fountains and statues, and an open-air theatre into the bargain, for entertainment on summer evenings.

All that looks attractive enough in certain lights, and possibly may fascinate the confessed pleasure-seeker and lounger, who may think it something desirable that he should be able at any minute to get out of London surround- ings—though he cannot alter the weather—into a foreign atmosphere. But would such an idea really attract the genuine Londoner? Is it not at least probable that he would prefer the neighbourhood of work and business activity to be kept separate from the open-air pleasure- places of West Kensington ? The frame of mind, possibly a little Puritanical, which rejects the idea of Parisian gardens and statuary, and coloured lights at night, and open-air theatrical performances, may be a little difficult to analyse, but it is for all that, we believe, something to be taken into account in accepting or rejecting new schemes of this kind. After all, what does anybody want with a per- petual " Paris in London,"—a Paris, be it said, which would only reflect one side, and that not the traest side, of real Parisian life ? Surely Londoners who have a real pride in their own great city would prefer to be able to point out to Frenchmen some essentially English feature of the streets, or parks, or open spaces, rather than draw attention, probably with apologies, to what is only imitation after all. Why should it be thought by any one that London would be made finer or better by being made less characteristic of English national thought ? Negue caelum negue animum mutant,—surely that is true criticism of the endeavours of those who think that there can be imported into London streets a fascination which is essentially a fascination because at present it is only to be found abroad. It may have been necessary to get rid of the dilapidated, and very likely insanitary, houses which used to stand on the now empty spaces between the new Gaiety Theatre and the Law Courts. But we do not know whether, given as the only alternative to the old houses a sort of expensive-cheap imitation of the Palais Royal, we should not have voted to keep Holy well standing.

Now that Holywell and all the other old houses which stood in the way of the Holborn-Strand " improvement" have disappeared, however, we hope it is not too late to urge earnestly, and with every consideration for the difficulties in which London County Councillors, anxious to spend ratepayers' money to the beat advantage, may find themselves, the view generally taken of the proposed County Council improvement of the Strand. It is difficult to explain on paper exactly what the proposed scheme of building will effect in the way of alter- ing the vista of the Strand, regarded either by the spectator looking from Wellington Street to the Law Courts, or from Middle Temple Lane looking west. (We may state that any one desirous of ascertaining the result which will be achieved by the plans at present likely to be accepted should communicate with the honorary secretary of the Further Strand Committee, 7 Pall Mall, S.W. This Committee has issued a. strong appeal, influentially supported by well-known public men, in which attention is drawn to the various alternative plans of building that have been suggested, some of which, by the way, were admirably reproduced in the Daily Graphic of October 20th, 1903.) But though it is difficult, as it were, to translate maps and diagrams into written language, there is one very easy test which any one interested in the subject can apply for himself. Let any one who wants to see what would be the effect of carrying out the plans for improving the Strand as at present approved by the London County Council, go out into the Strand himself, stand at two or three different points, and judge what the alteration will be in the vista of the Strand when high buildings have been erected along the lines of what are now only hoardings. If the spectator stands at a point a little east of the new Gaiety Theatre—(how finely, by the way, that building fronts on the road : it stands out, just as Belvoir Castle has been described by an old Lincolnshire hunting squire, " like a battleship ")—he will realise that the new buildings, as planned, will block out, in the form of a solid wall, the whole of the view down the Strand to the left of St. Mary's Church; the Law Courts disappear, and so does part of St. Clement Dane's. If, on the other hand, you take your stand on the pavement by the Law Courts, you will be able to see, when buildings have taken the place of the present hoardings, nothing of St. Mary's and nothing beyond. In short, if the plan proposed by the County

Council is carried into effect, there will be no view of any beauty whatever, either looking up or down the Strand. And to what end is it urged that this splendid potential perspec- tive should be sacrificed? Apparently in order to save or to secure a few thousand pounds. It is, we acknowledge, the right thing for a Council of business men to look this way and that way to see if they can save money for their constituents. But it is not the only thing for the London County Council to do. There is something further for such a body to consider, and that is, that they have a great oppor- tunity of altering for the better, and for many generations, one of the finest street views in London. We hope it is not too late for them to reconsider their arranged plans, and to adopt one or other of the alternative plans suggested by Mr. Mark Judge and others. They must admit, surely, that the letter of protest addressed to them which appeared in the Times of January 30th, signed by Mr. Thomas Jackson, Sir Edward Poynter, Mr. Blomfield, and twenty or thirty of the best-known and most influential artists and architects in London, cannot be disregarded. That letter only anticipates the verdict of the future, if it should most unhappily be decided to adhere to the plans at present proposed. But we believe we are right in thinking that the good-sense and artistic feeling of the Council will be moved by so weighty a document to reconsider an ill-advised project.