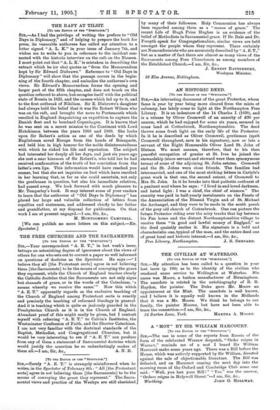 THE RAFT AT TILSIT. [To THE EDITOR or THE "SPECTATOR. " ]

Days in Diplomacy," and of helping to prepare the book for press; its venerable authoress has called my attention to a letter signed " A. L. K." in your issue of January 7th, and wishes me to write to you in reference to the incident con- nected with the historic interview on the raft on the Niemen. I must point out that " A. L. K." is mistaken in describing the extract which he (or she) quotes as " from the Memorandum kept by Sir Edward Disbrowe." Reference to " Old Days in Diplomacy" will show that the passage occurs in the begin- ning of the fourth chapter, and embodies the authoress's own views. Sir Edward's Memorandum forms the opening and larger part of the fifth chapter, and does not touch on the question referred to above, but occupies itself with the political state of Russia in 1825, and the causes which led up to it, and to the first outbreak of Nihilism. Sir E. Disbrowe's daughter had always held the belief that it was Sir Robert Wilson who was on the raft, and brought the news to Portsmouth which resulted in England despatching an expedition to capture the Danish fleet and to bombard Copenhagen. It is known that he was sent on a secret mission to the Continent with Lord Hutchinson between the years 1806 and 1808. She looks upon Sir Robert's action as one of the deeds by which Englishmen saved Europe from the hands oil Bonaparte, and held him in high honour for the noble disinterestedness with which he risked his life and reputation. The subject had interested her deeply all her days, and just six years ago she met a near kinsman of Sir Robert's, who told her he had received confirmation of the truth of her conviction from the latter'e own lips. This information would have reached you sooner, but that she set inquiries on foot which have resulted in her learning that, as far as she could ascertain, not only the gentleman in question, but also his immediate relatives, had passed away. We look forward with much pleasure to Mr. Temperley's book. It may interest some of your readers to learn that the authoress of " Old Days in Diplomacy" has placed her large and valuable collection of letters from royalties and statesmen, and addressed chiefly to her father and grandfather, at my disposal for publication. On that work I am at present engaged.----I am, Sir, &c.,