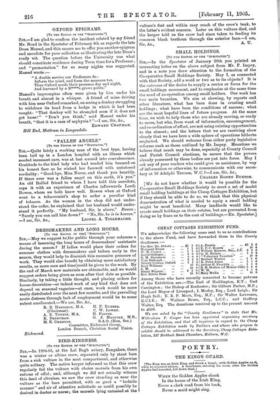 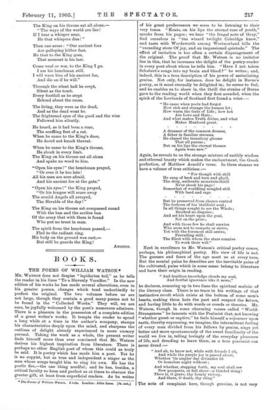 In the house of the Irish King, Never a clerk read from his book, Never a maid might sing. " The ways of the world are lies!

If I hear a whisper near, He that whispers dies ! "

Then one arose : " Our ancient foes Are galloping hither fast. He that to the King goes, That moment is his last.

Come weal or woe, to the King I go. I am his henchman still.

I will warn him of his ancient foe, And die an if he will."

Through the silent hall he crept, Silent as the tomb.

Every footfall as he stept Echoed about the room.

The frightened eyes of the good and the wise Followed him silently.

He heard, as it had been a roar, The scuffling feet of a rat. When he came to the King's door, He dared not knock thereat.

When he came to the King's throne, He shook in every limb.

The King on his throne sat all alone And spake no word to him.

All his men are sore afraid, And his ancient foe at the gate."

" Open his eyes !" the King prayed, "Or his tongue will scare away The armed Angels all arrayed, The Heralds of the day!"

The King on his throne sat compassed round With the ban and the aniere ban Of the army that with them is found Who put no trust in man.

The spirit from the henchman passed,—

Fled to the radiant ring.

His body on the ground was cast,— But still he guards the King !