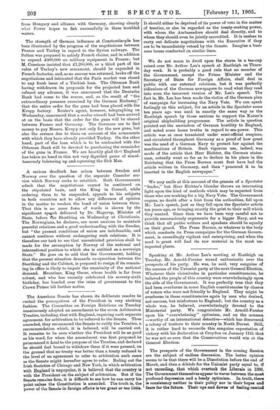 We do not mean to dwell upon the storm in

a tea-cup raised over Mr. Arthur Lee's speech at Eastleigh on Thurs- day week. It is probably a good rale that no member of the Government, except the Prime Minister and the Secretary of State for Foreign Affairs, shall deal in public with our external relations, but it was perfectly ridiculous of the German newspapers to read what they read into even the incorrect version of Mr. Lee's speech. The fact is, Mr. Lee has been made the victim of the German plan of campaign for increasing the Navy Vote. We can speak feelingly on this subject, for an article in the Spectator some ten years ago was used in exactly the same way as the Eastleigh speech by those anxious to support the Kaiser's original shipbuilding programme. The article in question pointed out the unwisdom of German hostility to England, and noted some home truths in regard to sea-power. This article was at once translated under semi-official auspices, and circulated throughout Germany as a proof of how great was the need of a German Navy to protect her against the machinations of Britain. Such vigorous use, indeed, was made of the article that Herr Richter, the German states- man, actually went so far as to declare in his place in the Reichstag that the Press Bureau must first have had the article written in Germany, and then " procured it to be inserted in the English newspaper."