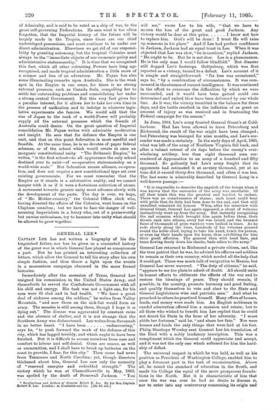 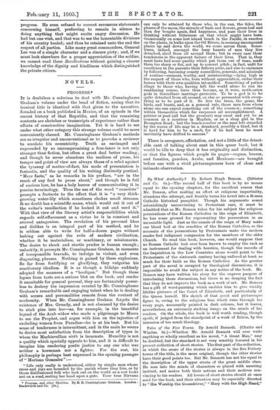 CAPTAIN LEE has not written a biography of his dis-

tinguished father, nor has he given us a connected history of the great war in which General Lee played so conspicuous a part. But he has printed an interesting collection of letters, which allow the General to tell his story after his own simple fashion, and thus throw a light upon the events in a momentous campaign obscured in the more formal histories.

Immediately after the secession of Texas, General Lee resigned his commission in the United States Army, and thenceforth he served the Confederate Government with all his skill and energy. His task was not a light one, for his men were ill clad and in bad health. " We have a great deal of sickness among the soldiers," he writes from Valley Mountain, " and now those on the sick-list would form an army. The measles is still among them, though I hope it is dying out." The disease was aggravated by constant rains and the absence of shelter, and it is not strange that the Southern Army was disheartened. Lee writes from Savannah in no better heart. "I have been endeavouring," says he, " to push forward the work of the defence of this city, which has lagged terribly, and which ought to have been finished. But it is difficult to arouse ourselves from ease and comfort to labour and self-denial. Guns are scarce, as well as ammunition, and I shall have to break up batteries on the coast to provide, I fear, for this city." Then came bad news from Tennessee and North Carolina ; yet, though disasters thickened about him, General Lee saw only the necessity of " renewed energies and redoubled strength." The victory which he won at Chancellorsville in May, 1863, was spoiled by the death of Stonewall Jackson. " You

ship of defeat. will see," wrote Lee to his wife, " that we have to mourn the loss of the great and good Jackson. Any victory would be dear at this price I know not how to replace him. God's will be done ! I trust He will raise up someone in his place." And if Lee had perfect confidence in Jackson, Jackson had an equal trust in Lee. When it was objected that Lee was slow, "he is cautious," replied Jackson. "He ought to be. But he is not slow. Lee is a phenomenon.

He is the only man I would follow blindfold." But disaster still dogged Lee's footsteps. Gettysburg, which was first reported as a victory, turned to a defeat. Lee's account of it is simple and straightforward. " Its loss was occasioned," says he, " by a combination of circumstances. It was com- menced in the absence of correct intelligence. It was continued in the effort to overcome the difficulties by which we were surrounded, and it would have been gained could one determined and united blow have been delivered by our whole line. As it was, the victory trembled in the balance for three days, and the battle resulted in the infliction of as great an amount of injury as was received and in frustrating the Federal campaign for the season."

In June, 1864, Lee's army fronted General Grant's at Cold- harbour. Had Lee been allowed to leave Petersburg and Richmond, the result of the war might have been changed ; but Petersburg was besieged for nine months, and Lee's sur- render was made a certainty. In the early days of April, 1865, what was left of the army of Northern Virginia fell back, and after a valiant retreat of six days before the enemy's over- whelming artillery, less than eight thousand men sur- rendered at Appomattox to an army of a hundred and fifty thousand. So gallantly had Lee's army fought that its opponents had estimated it at seventy thousand, yet at no time did it exceed thirty-five thousand, and often it was less. The last scene is admirably described by General Long in a well-known passage :—

" It is impossible to describe the anguish of the troops when it was known that the surrender of the army was inevitable. Of all their trials this was the greatest and hardest to endure. There was no consciousness of shame ; each heart could beat with pride that its duty had been done to the end, and that still unsullied remained its honour When, after his interview with General Grant, General Lee again appeared, a shout of welcome instinctively went up from the army. But instantly recognizing the sad occasion which brought him again before them, their shouts sank into silence, every hat was raised, and the bronzed faces of thousands of grim warriors were bathed in tears. As he rode slowly along the lines, hundreds of his veterans pressed round the noble chief, trying to take his hand, touch his person, or even lay their hands upon his horse, thus exhibiting for him their great affection. The general then with head bare, and tears flowing freely down his cheeks, bade adieu to the army."

General Lee returned to Richmond a private citizen, and, like

the true patriot that he was, he advised his officers and soldiers to remain in their own country, which needed all the help that it could get. There was much talk of emigration to Mexico, but

General Lee never wavered. " The duty of citizens," he said, " appears to me too plain to admit of doubt. All should unite in honest efforts to obliterate the effects of the war and to restore the blessings of peace. They should remain, if possible, in the country, promote harmony and good feeling, and qualify themselves to vote and elect to the State and General Legislatures wise and patriotic men." And what he preached to others he practised himself. Many offers of houses, lands, and money were made him. An English nobleman in candid admiration offered him a mansion and estate; but to

all those who wished to benefit him Lee replied that he could not desert his State in the hour of her adversity. "I must abide her fortunes," said he, "and share her fate." Nor were

houses and lands the only things that were laid at his feet.

Philip Stanhope Worsley sent General Lee his translation of the Iliad with a nobly laudatory inscription. This was a compliment which the General could appreciate and accept, and it was not the only one which softened for him the hard- ship of defeat.

The universal respect in which he was held, as well as his position as President of Washington College, enabled him to play a foremost part in the task of reconstruction. Above all, he raised the standard of education in the South, and made his College the equal of the more prosperous founda- tions in the North. But it is characteristic of him that once the war was over he had no desire to discuss it, nor to enter into any controversy concerning its origin and

progress. He even refused to correct erroneous statements concerning himself, preferring to remain in silence to doing anything that might excite angry discussion. He had but one wish, and that was to see the lamentable divisions of his country healed; and thus he retained unto the end the respect of all parties. Like many great commanders, General Lee was of a simple character and a sincere piety; and, if we must look elsewhere for a proper appreciation of the soldier, we cannot read these Recollections without gaining a clearer knowledge of the dignity and kindliness which distinguished the private citizen.