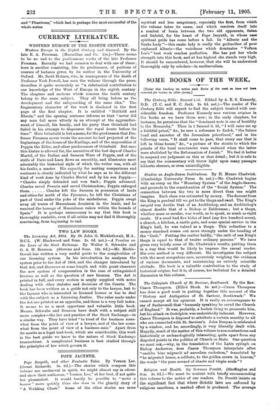 B.C.L. (W. Blackwood and Sons. 2s. 6d. net.)—A Treatise on the Laws of the Stock Exchange. By Walter S. Schwabe and G. A. H. Branson. (Stevens and Sone. 12s. 6d.)—Mr. Mickle- thwait has written a very useful guide to the complexities of our licensing system. In his introduction he analyses the system prior to the Act of 1904, and the changes introduced by that Act, and discusses at some length and with great clearness the new system of compensation in the case of extinguished licenses as well as the question of new licenses. The Act is printed in full, and every section is amply supplied with notes dealing with other statutes and decisions of the Courts. The book has been written as a guide not only to the lawyer, but to the layman who is interested in licensed houses or has to deal with the subject as a Licensing Justice. The rules made under the Act are printed as an appendix, and there is a very full index. It semis to us a most opportune and valuable little book. Messrs. Schwabe and Branson have dealt with a subject still more complex—the law and practice of the Stock Exchange—in a similar way. They have tried " to treat of the business some- what from the point of view of a lawyer, and of the law some- what from the point of view of a business man." Apart from its merits as a legal text-book, which are considerable, this work is the beat guide we know to the nature of Stock Exchange transactions. A complicated business is best studied through the principles of law which govern it.