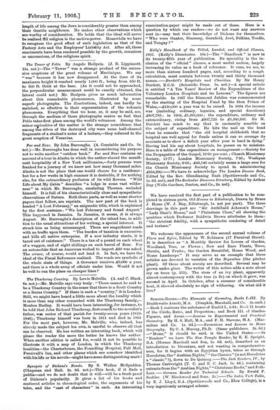 Kelly's Handbook of the Titled, Landed, and Official Classes, 1905.

(Kelly's Directories. 16s.)—The " Handbook " is now in its twenty-fifth year of publication. Its speciality is the in- clusion of the " official " classes, a most useful section, largely increasing its value as a book of reference. It runs, we see, to more than sixteen hundred pages, and, according to a rough calculation, must contain between twenty and thirty thousand names.—Burdett's Hospitals and Charities. By Sir Henry Burdett, K.C.B. (Scientific Press. 5s. net.)—A special article is entitled "A Ten Years' Review of the Expenditure of the Voluntary London Hospitals and its Lessons." The figures are remarkable. In 1897 the Diamond Jubilee was commemorated by the starting of the Hospital Fund by the then Prince of Wales,—.2150,000 a year was to be raised. In 1894 the income was (including ordinary, legacies, and special donations) £807,785 ; in 1903, £1,331,000 ; the expenditure, ordinary and extraordinary, rising from X837,725 to 41,341,641. Sir H. Burdett has much to say that is eminently sensible on the subject of expenditure. He hits the nail on the head when he remarks that " the old hospital shibboleth that no hospital can well appeal for funds unless it can so arrange its accounts as to show a deficit year after year is hard in dying." Having had his say about hospitals, he passes on to missions. Here is a table of the expenditure on management :—Society for the Propagation of the Gospel, 12.60 per cent. ; Church Missionary Society, 11'77; London Missionary Society, 7.95; Wesleyan Missionary Society, 6.05 ; .243,146 certainly seems a large sum for the Church Missionary Society to spend in administering .2354,390.—We have to acknowledge The London Diocese Book, Edited by the Rev. Glendinning Nash (Spottiswoode and Co., ls. 6d. net), and The Rochester Diocesan Directory, Edited by Arthur Day (Wells Gardner, Darton, and Co., 2s. net).