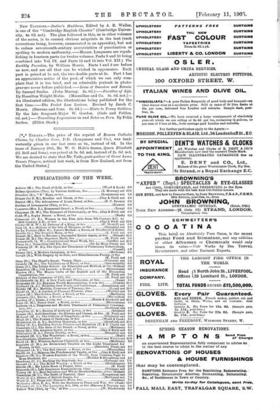 NEW Enmows.—Butler's Hudibras, Edited by A. E. Waller, is one

of the "Cambridge English Classics" (Cambridge Univer- sity, 4s. 6d. net). The plan followed in this, as in other volumes of the series, is to correct obvious misprints in the text (such corrections being, however, enumerated in an appendix), but not to reduce seventeenth-century eccentricities of punctuation or spelling to modern uniformity.—Messrs. Longmans are repub- lishing in fourteen parts (or twelve volumes, Parts 9 and 10 being combined into Vol. IX. and Parts 13 and 14 into Vol. XII.) The Earthly Paradise, by William Morris. Parts 1 and 2 are before us now, and are all that can be wished in appearance. Each part is priced at is. net, the two double parts at 28. Part 1 has an appreciative notice of the poet, of which we can only com- plain that it is too brief, and an admirable portrait in photo- gravure never before published.—Lives of Smeaton and Rennie. By Samuel Smiles. (John Murray. 3s. 6d.)—Parables of Life. By Hamilton Wright Mabie. (Macmillan and Co. 6s. 6d. net.)— An illustrated edition, the illustrations being published for the first time.—The Pocket Law Lexicon. Revised by Jacob C. Morris. (Stevens and Sons. 6s. 6d.)—Ilints to Young Soldiers. By the late Sergeant-Major W. Gordon. (Gale and Polden. Gd. net.)—Travelling Impressions in and Notes on Peru. By Felix Seebee. (Elliot Stock.)