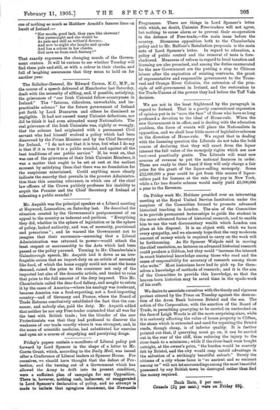 Page 3, 11 February 1905 — We are not in the least frightened by the paragraph
Close

We are not in the least frightened by the paragraph

in regard to Ireland. That is a purely conventional expression of opinion put in to "save the face" of those who have so long professed a devotion to the ideal of Home-rule. When the new Government is in office, and is dealing with the education problem, the force of events will place the Nationalists in opposition, and we shall hear little more of legislative schemes in the direction of Home-rule. We regret that in dealing with the licensing question the Liberals do not take the bold course of declaring that they will exact from the liquor interest the full value of the monopoly rights which are now bestowed practically gratis. The Liberals will want new sources of revenue to put the national finances in order. These are ready to their hand if they will only charge a fair price for the grant of the liquor-selling monopoly. Some £12,000,000 a year could be got from this source if liquor- sellers paid for licenses at the rate they pay in New York, while a far less drastic scheme would easily yield £5,000,000 a year to the Revenue.