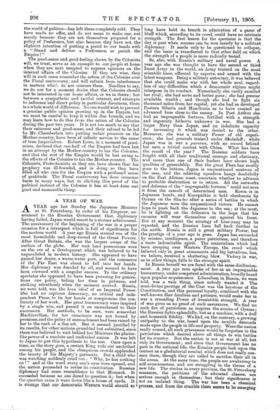 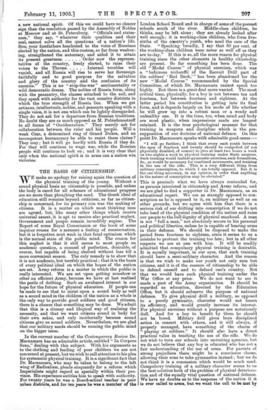 A YEAR OF WAR.

AYEAR ago last Sunday the Japanese Minister at St. Petersburg, by order of his Emperor, an- nounced to the Russian Government that, diplomacy having failed, Japan would resort to a sterner arbitrament. The anniversary of the beginning of 'the war is a proper occasion for a retrospect which is full of significance for the modern world. A year ago Russia seemed one of the most formidable and deep-rooted of the Great Powers. After Great Britain, she was the largest owner of the surface of the globe. Her vast land possessions were on the eve of a development which was believed to be unparalleled in modern history. She appeared to have gained her desire, a warm-water port, and the commerce of the Far East was about to fall into her hands. Her diplomacy was dreaded by all, and seemed to have been crowned with a singular success. To the ordinary spectator she appeared to have been pursuing for genera- tions one policy, biding her time in patience, and striking relentlessly when the moment arrived. Russia, we were told, was the beau ideal of an Imperial Power. She had no captious democracy, no critical and inde- pendent Press, to tie her hands or compromise the con- tinuity of her work. Her great bureaucracy were inspired by a single aim, and passed it on unweakened to their successors. Her methods, to be sure, were somewhat Machiavellian, for her conscience was not bound by promises, and the policy of encroachment had been raised by her to the rank of a fine art. But it seemed justified by its results, for other nations grumbled but submitted, since there was believed to wait behind her Ministers the glacier- like power of a resolute and undivided nation. It was left to Japan to put this hypothesis to the test. Once upon a time, as the story goes, a certain King rode out unclothed among his people, and the obsequious crowds applauded the beauty of his Majesty's garments. But a child who was watching suddenly cried out : " Why, he has nothing on ! " and at the word every one's eyes were opened, and the nation proceeded to revise its constitution. Russian diplomacy, had some resemblance to that Monarch. It succeeded because no one dared to question it ; but when the question came it went down like a house of cards. It is strange that our democratic Western world should so long have held its breath in admiration of a game of bluff which, according to its creed, could have no intrinsic strength. The first lesson for the spectator is that the day is past when success can be won merely by a militant diplomacy. It needs only to be questioned to collapse, and the issue is transferred to that other field on which the strength of a people is more radically tested. So, also, with Russia's military and naval power. A year ago she was thought to have the second or third finest Army in the world, an Army trained on the most scientific lines, officered by experts, and armed with the latest weapons. Being a military autocracy, it was believed that she could make war with her whole soul, regard- less of any difficulties which a democratic regime might interpose in its conduct. Numerically she vastly excelled her rival ; she had more and better guns ; she had greater available wealth ; and though she had to fight six thousand miles from her capital, yet she had so developed Eastern Siberia and Manchuria as to have created an advanced base close to the enemy. In Port Arthur she had an impregnable fortress, fortified with a strength and ingenuity hitherto unknown in war. She had a larger Navy than Japan, and an indefinite capacity for increasing it which was denied to the other. Moreover, she was a military Power of old experi- ence ; she had generals trained under Skobeleff ; while Japan was in war a parvenu, with no record behind her save a trivial contest with China. What has been the result of the year ? The Russian soldiers have fought with all their traditional courage and obstinacy, and more than one of their leaders have shown high qualities of generalship. But the great Fleet has mostly gone to the bottom, Japan is unquestioned mistress of the seas, and the relieving squadron hangs doubtfully on the East African coast, uncertain whether to advance to probable destruction or to return. All the outworks and defences of the " impregnable fortress " could not save it from the assault of determined men. Korea is in Japanese hands, and Kuropatkin is held checkmate by Oyama on the Sha-ho after a series of battles in which the Japanese were the unquestioned victors. He cannot hope to push back the Japanese to the sea; at the most, he is fighting on the defensive in the hope that his enemies will wear themselves out against his front. But at any moment the strategy of Liao-yang may be repeated, and the Russian lines fall back further to the north. Russia is still a great military Power, but the prestige of a year ago is gone. Japan has succeeded by science, intelligence, a purer patriotism, and therefore a more indomitable spirit. The materialism which had been creeping over Western Europe, the creed which believed only in great armaments and big battalions, has, we believe, received a shattering blow. Victory in war, as in other things, falls to the stronger spirit.

In Russia herself we are faced with the same disillusion- ment. A year ago men spoke of her as an impregnable bureaucracy, under competent administration, broadly based upon popular acquiescence. Liberalism in Russia, we were told, was a vain thing, since nobody wanted it. The semi-divine prestige of the Czar was the keystone of the Constitution, and this personal loyalty, combined with the well-known Slav fatalism and patience, would make her in war a crusading Power of irresistible strength. A year of war gives us no proof of such assurances. We find no such fire of patriotism as inspires the armies of Oyama; the Russian fights splendidly, but as a machine, with a dul and homesick fidelity. We find, on the contrary, a growing antipathy to the war, based upon the terrible demands made upon the people in life and property. Were the nation really roused, all such grievances would be forgotten in the patriotism which desired above all things to win battles for its country. But the nation is not at war at all, but only its Government ; and since that Government has no part in the national life, the Russian people look upon the contest as a gladiatorial combat which does not really con- cern them, though they are called to sacrifice their all in the arena. At the same time, the people are awakening to self-consciousness, and are struggling in the throes of a new life. The strikes in every province, the St. Petersburg massacre, the petitions of the educated classes, are serious enough in themselves; but their significance is not an isolated thing. The war has been a chemical, process, and from the crucible there seems to be emerging a, new national spirit. Of this we could have no clearer sign than the resolution passed by the Assembly of Nobles at Moscow and at St. Petersburg. " Officials and states- men," they say, " whatever their qualities and their zeal, cannot solve all the questions of a nation's life. Sire, your forefathers hearkened to the voice of Russians elected by the nation, and this custom, so far from weaken- ing, strengthened the autocracy, and aided it to attain its present greatness Order now the represen- tatives of the country, freely elected, to raise their voices to the Throne Internal troubles will vanish, and all Russia will rise to serve her Sovereign faithfully and to good purpose for the salvation and glory of the country and the confusion of its enemies." This is no " stop-the-war " sentimentality or wild democratic dream. The nobles of Russia form, along with the peasantry, the classes attached to the soil, and they speak with authority for the vast country districts in which the true strength of Russia lies. When we get artisans, intellectuals, nobles, and peasants speaking with a single voice, it is not one which can be lightly disregarded. They do not ask for a departure from Russian traditions. No doubt they are as much opposed as M. Pobiedonostzeff to all forms of " Occidentalism." They merely ask for collaboration between the ruler and his people. Will a weak Czar, a determined ring of Grand Dukes, and an incompetent bureaucracy be able to resist these claims ? They may; but it will go hardly with Russia if they do. For they will continue to wage war, while the Russian people will continue to look on ; and it is very clear that only when the national spirit is in arms can a nation win victories.