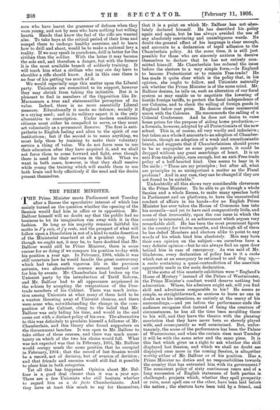 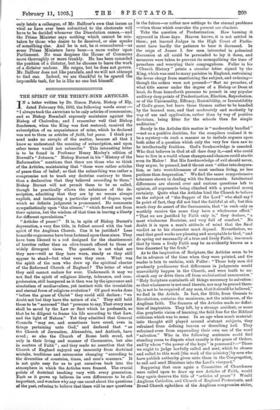 ( HE Prime Minister meets Parliament next Tuesday after a Recess the speculative interest of which has mainly turned on the question whether the opening of the Session would find him in office or in opposition. Mr. Balfour himself will no doubt say that the public had no business to let its imagination run away with it in this fashion. So long as his majority remains faithful his motto is Ty etas, et j'y reste, and the prospect of what will follow upon a Dissolution is not of a kind to make desertion of the Ministerial standard at all a prudent step. But though we ought not, it may be, to have doubted that Mr. Balfour would still be Prime Minister, there is some excuse for so doing if we compare his position to-day with his position a year ago. In February, 1904, while it was still uncertain how he would handle the great controversy which had taken such vigorous life in the previous autumn, two alternative' courses seemed marked out for him by events. Mr. Chamberlain had broken up the Unionist party by the introduction of Tariff Reform, and Mr. Balfour had to all appearance acquiesced in the schism by accepting the resignations of the Free- trade members of his Cabinet. There was much irrita- tion among Unionists at what many of them held to be a wanton throwing away of Unionist chances, and there were some who, notwithstanding the change in the com- position of the Cabinet, clung to the belief that Mr. Balfour was only biding his time, and would in the end come out with a distinct policy of his own. The alternative to this was definitely to proclaim himself a follower of Mr. Chamberlain, and this theory also found supporters on the Government benches. It was open to Mr. Balfour to take either of these courses, and there was much uncer- tainty on which of the two his choice would fall. What was not expected was that in Fdbruary, 1905, Mr. Balfour would occupy much the same position that he occupied in February, 1904; that the record of last Session would be a record, not of decision, but of evasion of decision ; and that friends and enemies would still find it possible to place hini in both categories. Yet all this has happened. Opinion about Mr. Bal- four is a good deal clearer than it was a year ago. There are a few Unionists who still hesitate whether to regard him as a de facto Chamberlainite. And they have at least this much to say for themselves, that it is a point on which Mr. Balfour .has not %abso- lutely declared himself. He has described his .policy again and again, but he has always avoided the use of any absolutely convincing and unambiguous words. No doubt the general effect of his language is clear enough, and amounts to a declaration of tepid adhesion to .the Chamberlain policy. At the same time, it is still just possible for those who are sincerely anxious to deceive themselves to declare that he has not entirely com- mitted himself. Mr. Chamberlain has reduced the. issue before the electors to a very simple form,—Is England to become Protectionist or to remain Free-trade? He has made it quite clear which is the policy that, in his opinion, she ought to follow, and Unionists naturally ask whether the Prime Minister is of the same mind. Mr. Balfour desires, he tells us, such an alteration of our fiscal system as may enable us to negotiate the lowering of hostile foreign tariffs, to protect the fiscal independence of our Colonies, and to check the selling of foreign goods in England below cost price. He desires closer commercial union with the Colonies. He recommends the Galling of a Colonial Conference. And he does not desire to raise home prices for the purpose of aiding home production,— a formula, however, adopted by all Protectionists of the new school. This is, of course, all very woolly and indecisive ; but taken as a whole it amounts to an adoption of Chamber- lainism, though an adoption of a weak and unenthusiastic brand, and suggests that if Chamberlainism should prove to be as unpopular as some people assert, it could be dropped without any great searchings of heart. It is an anti-Free-trade policy, sure enough, but an anti-Free-trade policy of a half-hearted kind. One seems to hear in it the aside : " These are my principles ; but after all, what are principles in so unimportant a matter as the Fiscal problem? And in any case, they can be changed if they are not found to be suitable."

Undoubtedly all this shows very considerable cleverness in the Prime Minister. To be able to go through a whole' Session and a whole Recess, to make many speeches both in Parliament and on platforms, to have the uncontrolled conduct of affairs in his hands—for no English Prime Minister has ever taken the House of Commons less into his councils—and yet to have said comparatively little, and • none of that irrevocably, upon the one issue in. which the country is interested, is an achievement which argues very remarkable skill. He has been the most prominent figure in the country for twelve months, and through all of them he has defied Members and electors alike to point to any words of his which bind him absolutely. Men may have their own opinion on the subject—we ourselves have a very definite opinion—but he can always find an open door behind him in case of emergency. As was said of Mr. Gladstone, every declaration of policy has in it a cache which can at an emergency be returned to and dug up,— a cache containing a quasi-contradiction of the assertion apparently made iu the main declaration.

If the scene of this masterly exhibition were " England's Home of Mystery " instead of the Palace of Westminster, the Prime Minister's conduct would deserve nothing but admiration. Where, his admirers might ask, will you find skill and adroitness comparable to his ? He seems so simple, so straightforward, so anxious to leave no one in doubt as to his intentions, so entirely at the mercy of his surroundings,—and yet before the performance ends the audience recognise that instead of being the creature of circumstances, he has all the time been moulding them! to his will, and they leave the theatre with the pleasing: conviction that they have never been so' cleverly played' with, and consequently so well entertained. But, unfor- tunately, the scene of the performance has been the Palace) of Westminster, and when the curtain rises next Tuesday, it will be with the same actor and the same piece. It is this fact which gives us a right to ask whether the skill displayed last Session, and which we shall no' doubt .see displayed once more in the coming Session, is altogether worthy either of Mr. Balfour or of his position. Has a, Prime Minister no duties and no responsibilities towards the country that has entrusted him with its government ? The consistent policy of sixty continuous years and of a, long succession of English statesmen of both parties is challenged; projects which, whether they spell prosperity or ruin, must spell one or the other, have been laid before the nation ; the electors have been told by a friend, and only lately a colleague, of Mr. Balfour's own that issues as vital as have ever been submitted to the electorate will have to be decided whenever the Dissolution comes,—and the Prime Minister says nothing which cannot be mis- taken by those who desire to be deceived, or else speaks of something else. And he is not, be it remembered—as some • Prime Ministers have been—a mere waiter upon Parliament. No man despises the House of Commons more thoroughly or more frankly. He has been 'conceded the position of a dictator, but he chooses to leave the work of a dictator undone. He reigns, but he does not govern. Mr. Balfour does not like parallels, and we will not attempt ta find one. Indeed, we are thankful to be spared the impossible task, for he is like no one but himself.