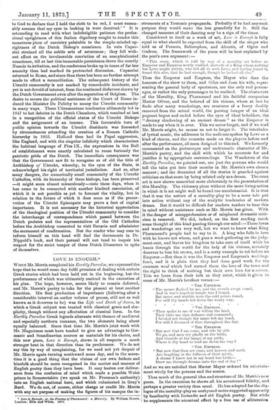 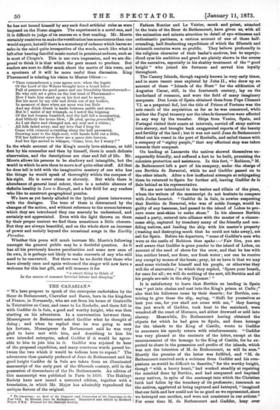 WHEN Mr. Morris completed his Earthly Paradise, we expressed the hope that he would some day fulfil promises of dealing with certain Greek stories which had been held, out in the beginning, but the performance of which was ultimately omitted in the execution of his plan. The hope, however, seems likely to remain deferred, and Mr. Morris's poetry to take for the present at least another direction. His first production of importance (following after a considerable interval an earlier volume of poems, still not so well known as it deserves to be) was the Life and Death of Jason, in which a Greek subject was treated with classical grace and sim- plicity, though without any affectation of classical form. In the Earthly Paradise Greek legends alternate with themes of medimval and especially northern romance, the two elements being about equally balanced. Since that time Mr. Morris's joint work with Mr. Magnitsson must have tended to give an advantage to Ger- manic and Scandinavian sources as materials for his choice, and this new piece, Love is Enough, shows in all respects a much stronger bent in that direction than its predecessor. We do not say this by way of complaining, for we need not yet despair of Mr. Morris again turning southward some day, and in the mean- time it is a good thing that the claims of our own fathers and kinsfolk should be more recognised in the matter and manner of English poetry than they have been. It may hasten our deliver- ance from the confusion of mind which made a possible Welsh prince in Somersetshire (we speak on Mr. Freeman's authority) into an English national hero, and which culminated in Gray's Bard. We do not, of course, either charge or credit Mr. Morris with any set purpose of making the figures of his masque the in- • Love is Enough; or, the Freeing of Pharamond: a Morality. By William Morrie. London : Ellis and 'White. 1873.

struments of a Teutonic propaganda. Probably if he had any such purpose they would move the less gracefully for it. Still the

changed measure of their dancing may be a sign of the times. Considered in itself as a work of art, Love is Enough is fully equal to what should be expected from the skill of the singer who told us of Perseus, Bellerophon, and Alcestis, of Ogler and

Gudrun. The framework of the poem will be best explained by the poet's own argument :—

" This story, which is told by way of a morality set before an Emperor and Empress newly wedded, showeth of a King whom nothing but Love might satisfy, who left all to seek Love, and having found it, found this also, that ho had enough, though he lacked all else."

Thus the Emperor and Empress, the Mayor who does the honours of the show to them, and Giles and Joan his wife, repre- senting the general body of spectators, are the only real person- ages, or rather the only personages to be realised. The characters of the Morality, King Pharamond and his faithful companion Master Oliver, and the beloved of his visions, whom at last he finds after many wanderings, are creatures of a fancy doubly removed from the actual world, the passing images of an ideal pageant begun and ended before the eyes of ideal beholders, the "dreamy shadowing of an ancient dream" as the Emperor is made to say when it is over. This we never forget, and if we read Mr. Morris aright, he means us not to forget it. The interludes of lyrical music, the addresses to the audience spoken by Love as a kind of chorus, and the remarks made on the players before and after the performance, all seem designed to this end. We formerly commented on the picturesque and undramatic character of Mr. Morris's poetry, and the skill with which he accounts for and justifies it by appropriate surroundings. The Wanderers of the Earthly Paradise, we pointed out, are just the persons who would tell the tales put into their mouths in Mr. Morris's own chosen manner ; and the dreamiest of all the stories is guarded against criticism on that score by being related only as a dream. The same art is now shown somewhat more elaborately in the presentation of this Morality. The visionary piece without the more living action in which it is set might well be found too unsubstantial. It is true that it was the nature of a morality-play to be a mere tale put into action without any of the analytic tendencies of modern drama. But it would be difficult for modern readers to bear this in mind without assistance such as Mr. Morris has given. With it the danger of misapprehension or of misplaced dramatic criti- cism is removed. We did, indeed, on the first reading catch some thought of this kind passing through our mind:—These loves and wanderings are very well, but we want to know what King Pharamond's people had to say to it. A king who falls in love with he knows not whom, and goes a wool-gathering on the judg- ment-seat, and leaves his kingdom to take care of itself while he hunts through the world for the lady of his visions, certainly deserves to lose his crown, and is a sorry example to set before an Emperor.—But then it was the Emperor and Empress's wedding- feast, and it is plain that they had done good work for the common weal which had earned them the love of the town and the right to think of nothing but their own love for a season. This we learn from their talk as they enter, which is given in some of Mr. Morris's loveliest verses :—

"The spears flashed by me, and tho swords swept round, And in war's hopeless tangle was I bound, But straw and stubble were the cold points found, For still thy hands led down the weary way.

" They spoke to me of war within tho land, They bade me sign defiance and command ; I heeded not though thy name left my hand, For still I dreamed of thee throughout the day.

"But now that I am come, and side by side We go, and men cry gladly on the bride, And tremble at the image of my pride, Where is thy hand to load me down the way ?

" But now that thou art come, and heaven and earth Are laughing in the fullness of their mirth, A shame I knew not in my heart has birth— Draw me through dreams unto the end of day :"

And so we are satisfied that Master Mayor ordered his entertain- ment wisely for the persons and the season.

Thus much of the general idea and structure of Mr. Morris's new poem. In the execution he shows all his accustomed felicity, and perhaps a greater variety than usual. He has adopted for the dia- logue of the morality-play an unrhymed metre suggested apparently by familiarity with Icelandic and old English poetry. But while he supplements the accentual effect by a free use of alliteratioa

he has not bound himself by any such fixed artificial rules as were imposed on the Norse singers. The experiment is a novel one, and it is difficult to judge of its success on a first reading. Mr. Morris certainly contrives to make the versification less monotonous than one would expect, but still there is a monotony of cadence which leaves an echo in the mind quite irrespective of the words, much like what is left after hearing fanciful music rooted in persistent sadness, such as is most of Chopin's. This is our own impression, and we are dis- posed to think it is that which the poet meant to produce. But readers are sure to differ much about the merits of this verse, and a specimen of it will be more useful than discussion. King Pharamond is relating his vision to Master Oliver :—

Thou rememberest a year agono now, when the legate Of the Lord of the Waters brought here a broad letter

Full of prayers for good peace and our friendship thenceforward—

How I bade him stand up on his feet and be merry,

Eat his meat by my side and drink out of my beaker, In memory of days when my meat was but little And my drink drunk in haste between saddle and straw.

But lo ! midst of my triumph, as I noted the feigning Of the last foeman humbled, and the hall fell a murmuring,

And blithely the horns blew, 'Be glad, spring prevaileth,'

As I sat there and changed not, my soul saw a vision ; All folk faded away, and my love that I long for Came with raiment a-rustling along the hall pavement, Drawing near to the high-seat. with hands held out a little, Till her hallowed eyes drew me a space into heaven, And her lips moved to whisper, 'Come, love, for I weary!' "

In the whole account of the King's moody love-sickness, as told first by his counsellor and then by himself, there is much delicate observation, and the descriptions are clear and full of life. Mr. Morris allows his persons to be shadowy and intangible, but the world in which he sets them to move is of quite other stuff. All that be does tell is told with the imaginative mastery of one who has the things he would speak of thoroughly within the compass of his sight. He is never otiose or slovenly. But while there is abundance of general local colour, there is a notable absence of definite locality in Love is Enough, and a fair field for any readers who like to construct geographical puzzles.

We have as yet barely alluded to the lyrical pieces interwoven with the dialogue. The tone of these is determined by the changes of the action, and without reference to the scenes between which they are introduced they can scarcely be understood, and certainly not appreciated. Even with the light thrown on them by their proper context we find them sometimes a little obscure. But they are always beautiful, and on the whole show an increase of power and melody beyond the occasional songs in the Earthly Paradise.

Whether this poem will much increase Mr. Morris's following amongst the general public may be a doubtful question. As it has all his previously known peculiarities and some new ones of its own, it is perhaps not likely to make converts of any who still need to be converted. But there can be no doubt that those who have already once and again welcomed the singer will now have a welcome for this last gift, and will treasure it for

a sweet thing to think of In the season of summer betwixt labour and sleeping."