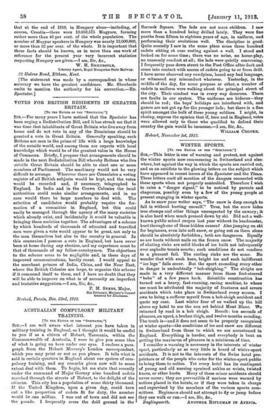 SIR,—For many years I have noticed that the Spectator has been urging a Redistribution Bill, and it has struck me that it was time that inhabitants of Great Britain who live away from home and do not vote in any of the Dominions should be granted a vote in Great Britain. Generally speaking, such Britons are men in the prime of life with a large knowledge of the outside world, and among them are experts with local knowledge which would be of the greatest value in the House of Commons. Briefly, I propose that arrangements should be made in the next Redistribution Bill whereby Britons who live autside Great Britain should be able to elect one or more members of Parliament. The machinery would not be very difficult to arrange. Wherever there are Consulates a voting register of all British subjects would be kept, and the votes would be recorded and, if necessary, telegraphed to England. In India and in the Crown Colonies the local authorities could make similar arrangements, and in no case would there be large numbers to deal with. The selection of candidates _would probably require the for- mation of a committee in England, but this could easily be managed through the agency of the many societies which already exist, and incidentally it would be valuable in bringing these societies together. The advantages of a scheme by which hundreds of thousands of educated and travelled men were given a vote would appear to be great, not only to the men themselves but also to the country in general. In this connexion I possess a vote in England, but have never been at home during any election, and my experience must be that of thousands of my fellow-countrymen. The objections to the scheme seem to be negligible and, in these days of improved communications, hardly count. I would appeal to the merchant princes of India, China, and the Near East, where the British Colonies are large, to organize this scheme if it commend itself to them, and I have no doubt that they will be able to improve on what is of necessity an imperfect and tentative suggestion.—I am, Sir, &c., P. M. SYKES, Major,