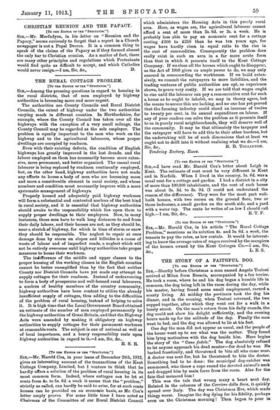 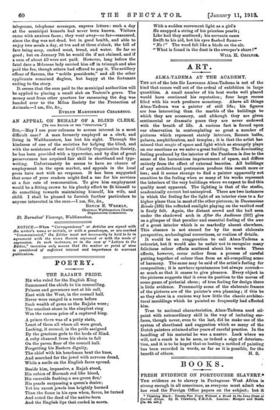 THE STORY OF A FAITHFUL DOG.

SIR,—Shortly before Christmas a man named Angelo Testoni arrived at Milan from Brescia, accompanied by a fox terrier. He took a room, where he and his dog began a humble life in common, the dog being left in the room during the day, while his master, having found some small employment, earned a scanty living. At midday the portinaia took the dog his dinner, and in the evening, when Testoni returned, the two supped together, after which they went out for a walk in a lonely street. On the man's return from his daily rounds, the dog could not show his delight sufficiently, and the evening hours made up for the solitude of the day. Finally the man went to bed, and the dog was allowed to lie at his feet.

One day the man did not appear as usual, and the people of the house went up to see what was the matter. They found him lying motionless with the dog beside him. Here begins the story of the "Cane fedele." The dog absolutely refused to let anyone approach his dead master—for dead he was. He barked frantically, and threatened to bite all who came near. A doctor was sent for, but he threatened to bite the doctor. Something had to be done: the municipal dog-catcher was summoned, who threw a rope round the devoted animal's neck and dragged him by main force from the room. Alas for the fate that menaced him !

This was the tale that wrung many a heart next day. Related in the columns of the Corriere delta Sera, it quickly spread over Italy. The day was Christmas Eve, which made things worse. Imagine the dog dying for his fidelity, perhaps even on the Christmas morning ! Then began to pour in

telegrams, telephone messages, express letters : such a day at the municipal kennels had never been known. Visitors came with anxious faces ; they went away—so far—reassured, since the dog was not dead, but in good health, and able to enjoy two meals a day, at ten and at three o'clock, the bill of fare being soup, cooked meat, bread, and water. So far so good ; but on January 7th be would die if not claimed, and if a sum of about £3 were not paid. However, long before the fatal date a Milanese lady carried him off in triumph and also paid the fee, though others had offered to pay it. The artillery officer of Savona, the " nobile possidente," and all the other applicants remained dogless, but happy at the fortunate ending to the story.

It seems that the sum paid to the municipal authorities will be applied to placing a small slab on Testoni's grave. The money sent from other quarters for ransoming the dog was handed over to the Milan Society for the Protection of Animals.—I am, Sir, &c.,