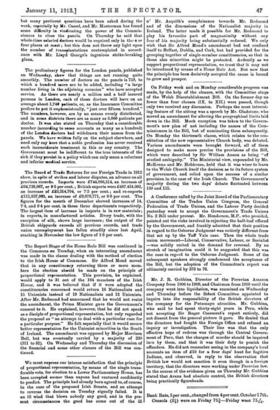 Page 3, 11 January 1913 — We must express our intense satisfaction that the principle of
Close

We must express our intense satisfaction that the principle of

proportional representation, by means of the single trans- ferable vote, for election to a Lower Parliamentary House, has been accepted sooner than anyone had ventured confidently to predict. The principle had already been agreed to, of course, in the case of the proposed Irish Senate, and an attempt to reverse the decision on Tuesday signally failed. It is an ill wind that blows nobody any good, and in the pre- sent circumstances the good has come out of the ill o' Mr. Asquith'a complaisance towards Mr. Redmond and of the dimensions of the Nationalist majority in Ireland. The latter made it possible for Mr. Redmond to play his favourite part of magnanimity without any fear of his majority being eubstantially reduced. We only wish that Sir Alfred Mend's amendment had not confined itself to Belfast, Dublin, and Cork, but had provided for the grouping together of single-member constituencies, so that in those also minorities might be protected. Ardently as we support proportional representation, we trust that it may not be introduced by means of a Home Rule Act. But now that the principle has been decisively accepted the cause is bound to grow and prosper.