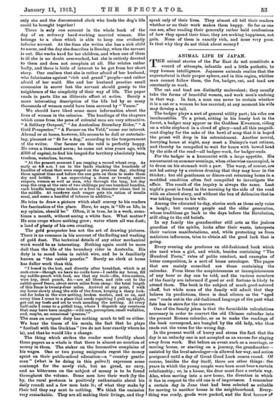 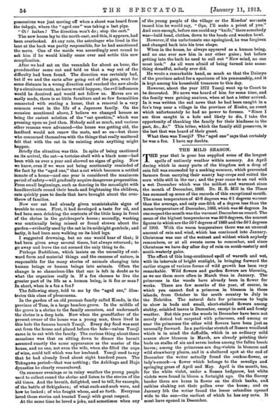 THE animal stories of the Far East do not constitute a record of attempts, infantile and a little pathetic, to copy human intelligence. Japanese animals realize that the supernatural is their proper sphere, and in this region, whither man cannot follow them, the fox, badger, cat, and toad are constantly at work.

The cat and toad are distinctly malevolent; they usually take the forms of beautiful women, and work men's undoing in that way. In fact, a, man can never be certain whether it is a cat or a woman he has married; at any moment his wife may develop a tail.

The badger plays a sort of general utility part; his rOles are inexhaustible. To a priest, sitting in his lonely hut in the forest, a badger may appear as the Goddess Kwannon, riding on a white elephant in a cloud of glory—and all this magnifi- cent display for the sake of the bowl of soup that it is hoped the priest will drop in his astonishment. Another mortal, hurrying home at night, may meet a Daimyo'a vast retinue, and thereby be compelled to wait for hours with bowed head by the side of the road—all badger-work, for badger-ends.

For the badger is a humourist with a large appetite. His

amusement on summer evenings, when otherwise unoccupied, is to drum on his stomach with a paw. The wary, of course, are not led astray by a curious droning that they may hear in the thicket ; but old gentlemen or diners-out returning home in a muddled condition often feel compelled to investigate the affair. The result of the inquiry is always the same. Last night's guest is found in the morning by the side of the road with an absurd story, and without the box of delicacies that he was taking home to his wife.

Among the educated to-day, stories such as these only raise a laugh ; but country people and the older generation, whose traditions go back to the days before the Revolution, still cling to the old beliefs.

In my family the grandmother still acts as the jealous guardian of the spirits, looks after their wants, interprets their various manifestations, and, while protecting us from malicious influences, tries to obtain all the good luck that is going.

Every evening she produces an old-fashioned book which she used when a girl, and which, besides containing "The Hundred Poets," rules of polite conduct, and examples of letter composition, is a sort of home astrologer. The pages that are mainly consulted are those containing the calendar. From these the auspiciousness or inauspiciousness of any hour or day can be told, and the various members of the family are informed if good or evil fortune is likely to attend them. The book is the subject of much good-natured chaff, but while none of the family will admit that they believe its predictions, there is dead silence as the "aged one" reads out in the old-fashioned language of the past what fate has in store for the morrow.

One of the family jokes is that the formidable calculations necessary in order to convert the old Chinese calendar into the present Roman calendar, so as to make the readings of the book correspond, are bungled by the old lady, who thus reads out the verse for the wrong day.

In the present world of hurry and stress the fact that the day is an unlucky one is not accepted as an excuse for staying away from work. But before an event such as a marriage, or moving house, or starting on a journey, the grandmother— assisted by the local astrologer—is allowed her way, and action postponed until a day of Great Good Luck comes round. Of course, besides the day itself, there are other things ; the years in which the young couple were born must bear a certain relationship ; or, in a house, the door must face a certain way. Also, when moving into a new home, the direction in which it lies in respect to the old one is of importance. I remember a certain day in June that had been selected as suitable for moving to another house in the neighbourhood. Every- thing was ready, goods were packed, and the first barrow of

possessions was just moving off when a shout was heard from the ink yojo, where the "aged one" was taking a last pipe.

The new house lay to the north-east, and this, it appears, had been overlooked. At any rate, the astrologer who lived in the lane at the back was partly responsible, for he had sanctioned the move. One of the maids was accordingly sent round to ask him if he would kindly come over and settle this new complication.

After we had sat on the verandah for about an hour, the grandmother came out and told us that a way out of the difficulty had been found. The direction was certainly bad, but if we and the carts after going out of the gate, went for some distance in a wrong direction and reached the new abode by a circuitous route, no harm would happen; the evil influences would be deceived and would not follow us. Moves are so easily made, there is so little furniture and so few formalities connected with renting a house, that a removal is a very common event in the life of a Japanese family. On the occasion mentioned above, I believe we changed houses as being the easiest solution of the "cat question," which was pressing upon us just then. Nobody said as much, and various other reasons were advanced—the house was getting old, the landlord would not renew the mats, and so on—but those who concerned themselves with the things that really mattered felt that with the cat in its existing state anything might happen.

Briefly the situation was this. In spite of being cautioned on its arrival, the cat—a tortoise-shell with a black nose—had been with us over a year and showed no signs of going. Now we knew, even if we were not being continually reminded of the fact by the "aged one," that a cat which becomes a settled inmate of a home—and one year is considered the maximum period of safety—will gradually acquire dangerous propensities. From small beginnings, such as dancing in the moonlight with handkerchiefs round their beads and frightening the children, cats quickly pass to deeds that have brought about the over- throw of families.

Now our cat had already given unmistakable signs of trouble to come. First, it bad developed a taste for oil, and had been seen drinking the contents of the little lamp in front of the shrine in the gatekeeper's house ; secondly, washing was continually being missed or found strewn about the garden—evidently used by the cat in its midnight gambols ; and lastly, it had been seen walking on its hind legs.

I suggested drowning, but no one would hear of that; it had been given away several times, but always returned; to go away and leave the cat seemed the only thing to do.

Perhaps Buddhism, which insists on the unreality of out- ward form and material things and the oneness of nature, is responsible for the many stories of animals changing into human beings or human beings into animals. Often the change is so chameleon-like that one is left in doubt as to what the organism really is. If a fox chooses to live the greater part of its life as a human being, is it fox or man ? In short, when is a fox a fox ?

The following story, told to me by the "aged one," illus- trates this class of phenomena.

In the garden of an old yeoman family called Kondo, in the province of Tose, is a large bamboo grove. In the middle of the grove is a shrine to the family ancestors, and underneath the shrine is a deep hole. Now when the grandfather of the present owner of the house was a young man, there lived in this hole the famous hermit Yosoji. Every day food was sent out from the house and placed before the hole—unless Yosoji came in to eat with the family. The curious thing about these occasions was that on sitting down to dinner the hermit assumed exactly the same appearance as the master of the house, and no one, not even the wife, when she filled the cups of wine, could tell which was her husband. Yosoji used to say that he had already lived about eight hundred years. The Tokugawa period—that was nothing ; the Ashikaga and Hojo dynasties he clearly remembered.

On summer evenings or in rainy weather the young people used to collect round the shrine and listen to the stories of the old times. And the hermit, delighted, used to tell, for example, of the battle of Sekigahara ; of what such-and-such wore, and bow he looked ; of who fought whom, and so forth. Everyone loved these stories and treated Yosoji with great respect.

At the same time he loved a joke, and sometimes when any

of the young people of the village or the Kondos' servants teased him he would say, " Oya, I'll make a priest of you." And sure enough, before one could say "knife," there somebody was—bald head, clothes, down to the beads and wooden bowl.

However, if the unfortunate one apologized, he was forgiven and changed back into his true shape.

When in the house, he always appeared as a human being, and no one ever saw him in any other guise ; but before getting into the bath he used to call out "Now mind, no one must look." As all were afraid of being turned into some- thing dreadful, nobody ever did.

He wrote a remarkable hand, so much so that the Daimyo of the province asked for a specimen of his penmanship, and it is kept among his household treasures to this day.

However, about the year 1872 Yosoji went up to Court to be decorated. No news was beard of him for some time, and the family were getting anxious, when at last a letter arrived. In it was written the sad news that he had been caught in a fox's trap near a village in the province of Koshu, an event which unfortunately he had no power to foresee. "Since I am thus caught in a hole and likely to die, I take the opportunity of thanking the family for their kindness in the past, Sze., Ix." This letter, which the family still preserves, is the last that was heard of their guest.

What then was Yosoji? The "aged one" says that certainly he was a fox. I have my doubts.