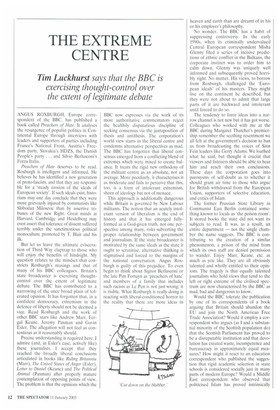 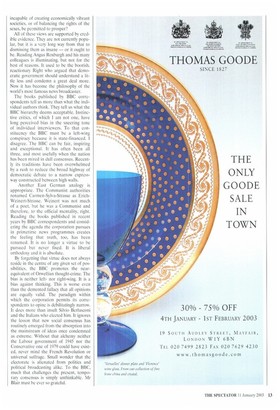 Tim Luckhurst says that the BBC is

exercising thought-control over the extent of legitimate debate

ANGUS ROXBURGH, Europe correspondent of the BBC, has published a book called Preachers of Hate. It analyses the resurgence of populist politics in Continental Europe through interviews with leaders and supporters of parties including France's National Front, Austria's Freedom party, Slovakia's HDZS, the Danish People's party . . . and Silvio Berlusconi's Forza Italia.

Preachers of Hate deserves to be read. Roxburgh is intelligent and informed. He believes he has identified a new generation of proto-fascists, and that they are responsible for a 'steady erosion of the ideals of European society'. If such ideals exist, historians may one day conclude that they were more grievously injured by communists like Slobodan Milosevic than by assertive tribunes of the new Right. Great minds at Harvard, Cambridge and Heidelberg may even assert that tolerance of dissent suffered terribly under the sanctimonious political monoculture promoted by T. Blair and his ilk.

But let us leave the ultimate evisceration of Third Way claptrap to those who will enjoy the benefits of hindsight. My question relates to the mindset that constricts Roxburgh's musings and that of many of his BBC colleagues. Britain's state broadcaster is exercising thoughtcontrol over the extent of legitimate debate. The BBC has contributed to a narrowing of the once broad plain of tolerated opinion. It has forgotten that, in a confident democracy, extremism in the defence of liberty should not be deemed a vice. Read Roxburgh and the work of other BBC stars like Andrew Marr, Fergal Keane, Jeremy Paxman and Gavin Ester. The allegation will not feel as contentious as it reasonably should.

Precise understanding is required here. I admire (and, in Ester's case. actively like) these journalists. I accept that they reached the broadly liberal conclusions articulated in books like Ruling Britannia (Marr), The United States of Anger (Esler), Letter to Daniel (Keane) and The Political Animal (Paxman) after properly mature contemplation of opposing points of view. The problem is that the opinions which the BBC now expresses via the work of its most authoritative commentators reject the healthily disputatious discipline of seeking consensus via the juxtaposition of thesis and antithesis. The corporation's world view starts in the liberal centre and condemns alternative perspectives as mad. The BBC has forgotten that liberal consensus emerged from a conflicting blend of extremes which were mixed to create balance. It treats the rigid new orthodoxy of the militant centre as an absolute, not an average. More peculiarly, it characterises it as moderate and fails to perceive that this, too, is a form of intolerant extremism, shorn of ideology but not of menace.

This approach is additionally dangerous while Britain is governed by New Labour militants. The notion that an acutely intolerant version of liberalism is the end of history and that it has emerged fullyformed as a God-given truth, not one perspective among many, risks subverting the proper relationship between government and journalism. If the state broadcaster is motivated by the same ideals as the state it ought to scrutinise. alternative thinking is stigmatised and forced to the margins of the national conversation. Angus Roxburgh is guilty of this prejudice. To even begin to think about Signor Berlusconi or the late Pim Fortuyn as 'preachers of hate' and members of a family that includes such racists as Le Pen is not just wrong: it is risible. What Roxburgh is really doing is reacting with liberal-conditioned horror to the reality that there are more ideas in heaven and earth than are dreamt of in his or his employer's philosophy.

No wonder. The BBC has a habit of suppressing controversy. In the early 1990s, when its criminally undervalued Central European correspondent Misha Glenny filed a series of incisive predictions of ethnic conflict in the Balkans, the corporate instinct was to order him to calm down. Glenny was uniquely well informed and subsequently proved horribly right. No matter. His views, to borrow from Roxburgh, challenged the 'European ideals' of his masters. They might live on the continent he described, but they were not about to admit that large parts of it are backward and intolerant until forced to do so.

The tendency to force ideas into a narrow channel is not new but it has got worse. Colleagues who worked with me at the BBC during Margaret Thatcher's premiership remember the seething resentment we all felt at the government's decision to ban us from broadcasting the voices of Sinn Fein leaders like Gerry Adams. We loathed what he said, but thought it crucial that viewers and listeners should be able to hear him and reach their own conclusions. These days the corporation goes into paroxysms of self-doubt as to whether it should grant air time to those who argue for British withdrawal from the European Union, supporters of selective education, and critics of Islam.

The former Prussian State Library in Communist East Berlin contained something known to locals as 'the poison room'. It stored books the state did not want its subjects to read. It was, as a result, an entire department — not the single chamber the name suggests. The BBC is contributing to the creation of a similar phenomenon, a prison of the mind from which its own staff are denied permission to wander. Enjoy Marr, Keane, etc. as much as you like. They are all obviously talented and wholly entitled to their opinions. The tragedy is that equally talented journalists who hold views that tend to the left or right extreme of the civilised spectrum are now characterised by the BBC as mad, bad and dangerous to know.

Would the BBC tolerate the publication by one of its correspondents of a book arguing that Britain should abandon the EU and join the North American Free Trade Association? Would it employ a correspondent who argues (as I and a substantial minority of the Scottish population do) that the Scottish Parliament has proved to be a disreputable institution and that devolution has created waste, incompetence and bureaucracy in approximately equal measures? How might it react to an education correspondent who published the suggestion that rigid academic selection in state schools is considered socially just in many parts of modern Europe? Would a Middle East correspondent who observed that politicised Islam has proved intrinsically

incapable of creating economically vibrant societies, or of balancing the rights of the sexes, be permitted to prosper? All of these views are supported by credible evidence. They are not currently popular, but it is a very long way from that to dismissing them as insane — or it ought to be. Reading Angus Roxburgh and his many colleagues is illuminating, but not for the best of reasons. It used to be the boorish, reactionary Right who argued that democratic government should understand a little less and condemn a great deal more. Now it has become the philosophy of the world's most famous news broadcaster.

The books published by BBC correspondents tell us more than what the individual authors think. They tell us what the BBC hierarchy deems acceptable. Instinctive critics, of which I am not one, have long perceived bias in the sneering tone of individual interviewers. To that constituency the BBC must be a left-wing conspiracy because it is state-financed. I disagree. The BBC can be fair, inspiring and exceptional. It has often been all three, and most usefully when the nation has been mired in dull consensus. Recently its traditions have been overwhelmed by a rush to reduce the broad highway of democratic debate to a narrow expressway constructed between high walls. Another East German analogy is appropriate. The Communist authorities renamed Carmen-Sylva-Strasse as ErichWeiriert-Strasse. Weinert was not much of a poet, but he was a Communist and therefore, to the official mentality. right. Reading the books published in recent years by BBC correspondents and considering the agenda the corporation pursues in primetime news programmes creates the feeling that truth, too, has been renamed. It is no longer a virtue to be pursued but never fixed. It is liberal orthodoxy and it is absolute. By forgetting that virtue does not always reside in the centre of any given set of possibilities, the BBC promotes the nearequivalent of Orwellian thought-crime. The bias is neither leftnor right-wing. It is a bias against thinking. This is worse even than the demented fallacy that all opinions are equally valid. The paradigm within which the corporation permits its correspondents to opine is debilitatingly narrow. It does more than insult Silvio Berlusconi and the Italians who elected him. It ignores the lesson that new social consensus has routinely emerged from the absorption into the mainstream of ideas once condemned as extreme. Without that alchemy neither the Labour government of 1945 nor the Conservative one of 1979 could have existed, never mind the French Revolution or universal suffrage. Small wonder that the electorate is alienated from politics and political broadcasting alike. To the BBC, much that challenges the present, temporary consensus is simply unthinkable. Mr Blair must be ever so grateful.