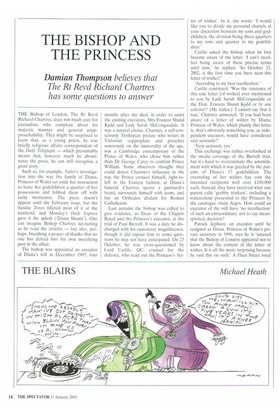 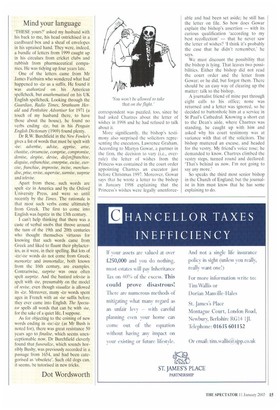 THE BISHOP AND THE PRINCESS

The Rt Revd Richard Chartres has some questions to answer

THE Bishop of London, The Rt Revd Richard Chartres, does not much care for journalists, who complain about his majestic manner and general unapproachability. They might be surprised to learn that, as a young priest, he was briefly religious affairs correspondent of the Daily Telegraph — which presumably means that, however much he abominates the press, he can still recognise a good story.

Such as, for example, Tatler's investigation into the way the family of Diana, Princess of Wales set aside her instruction to leave her godchildren a quarter of her possessions and fobbed them off with tacky mementos. The piece doesn't appear until the February issue, but the Sunday Times filleted most of it at the weekend. and Monday's Daily Express gave it the splash ('Diana Shame'). One can imagine Bishop Chartres tut-tutting as he read the articles — but also, perhaps, breathing a prayer of thanks that no one has delved into his own mystifying part in the affair.

The bishop was appointed an executor of Diana's will in December 1997, four months after she died, in order to assist the existing executors, Mrs Frances Shand Kydd and Lady Sarah McCorquodale. It was a natural choice. Chartres, a self-consciously Trollopian prelate who writes in Victorian copperplate and preaches sonorously on the immorality of the age, was a Cambridge contemporary of the Prince of Wales, who chose him rather than Dr George Carey to confirm Prince William. Some observers thought they could detect Chartres's influence in the way the Prince crossed himself, right-toleft in the Eastern fashion, at Diana's funeral: Chartres sports a patriarch's beard, surrounds himself with icons, and has an Orthodox disdain for Roman Catholicism.

Last autumn the bishop was called to give evidence, as Dean of the Chapels Royal and the Princess's executor, at the trial of Paul Burrell. It was a duty he discharged with his customary magnificence, though it did expose him to some questions he may not have anticipated. On 23 October, he was cross-questioned by Lord Carlile, QC, counsel for the defence, who read out the Princess's let ter of wishes'. In it, she wrote: 'I would like you to divide my personal chattels at your discretion between my sons and godchildren, the division being three quarters to my sons and quarter to my godchildren.'

Carlile asked the bishop when he first became aware of the letter. 'I can't recollect being aware of these precise terms until now,' he replied. 'So October 23. 2002, is the first time you have seen this letter of wishes?'

'According to my best recollection.'

Carlile continued: 'Was the existence of this side letter [of wishes] ever mentioned to you by Lady Sarah McCorquodale or the Hon. Frances Shand Kydd or by any solicitor?' (My italics.) 'I cannot say that it was,' Chartres answered. 'If you had been aware of a letter of wishes by Diana, Princess of Wales, which plainly this letter is, that's obviously something you, as independent executor, would have considered very seriously?'

This exchange was rather overlooked in the media coverage of the Burrell trial, but it's hard to overestimate the astonishment with which it was greeted by the parents of Diana's 17 godchildren. The overruling of her wishes has cost the intended recipients well over £100,000 each. Instead, they have received what one parent calls 'grubby trinkets', including a watercolour presented to the Princess by the catalogue chain Argos. How could an executor of the will have `no recollection' of such an extraordinary, not to say meanspirited, decision?

Patrick Jephson, an executor until he resigned as Diana, Princess of Wales's private secretary in 1996, says he is 'amazed that the Bishop of London appeared not to know about the content of the letter of wishes. It is all the more surprising because he said this on oath.' A Fleet Street royal correspondent was puzzled, too, since he had asked Chartres about the letter of wishes in 1998 and he had refused to talk about it.

More significantly, the bishop's testimony also surprised the solicitors representing the executors, Lawrence Graham. According to Martyn Gowar, a partner in the firm, the decision to vary (i.e., overrule) the letter of wishes from the Princess was contained in the court order appointing Chartres an executor just before Christmas 1997. Moreover, Gowar says that he wrote a letter to the bishop in January 1998 explaining that the Princess's wishes were legally unenforce

able and had been set aside; he still has the letter on file. So how does Gowar explain the bishop's assertion — with its curious qualification 'according to my best recollection' — that he never saw the letter of wishes? 'I think it's probably the case that he didn't remember,' he says.

We must discount the possibility that the bishop is lying. That leaves two possibilities. Either the bishop did not read the court order and the letter from Gowar; or he did, but forgot them. There should be an easy way of clearing up the matter: talk to the bishop.

A journalist friend of mine put through eight calls to his office; none was returned and a letter was ignored, so he decided to buttonhole him at a service in St Paul's Cathedral. Knowing a short cut to the Dean's aisle. where Chartres was standing, he caught up with him and asked why his court testimony was at variance with that of the solicitors. The bishop muttered an excuse, and headed for the vestry. My friend's voice rose; he demanded to know. Chartres climbed the vestry steps, turned round and declared: 'That's behind us now. I'm not going to say any more.'

So speaks the third most senior bishop in the Church of England; but the journalist in him must know that he has some explaining to do.