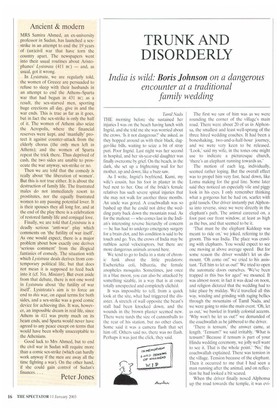 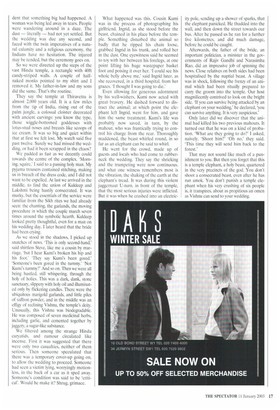 India is wild: Boris Johnson on a dangerous

encounter at a traditional family wedding

Tamil Nadu THE morning before she sustained her injuries I was on the beach having lunch with Ingrid, and she told me she was worried about the crows. 'Is it not dangerous?' she asked, as they hopped around us with their black, dagger-like bills, waiting to seize a bit of stray pod. Poor Ingrid. Last night was her second in hospital, and her six-year-old daughter was finally overcome by grief. On the beach, in the dark, she set up a frightening wail for her mother, up and down, like a buzz saw.

As I write, Ingrid's boyfriend, Kumi, my wife's cousin, has his foot in plaster in the bed next to her. One of the bride's female relatives has such severe spinal injuries that she may not walk for another three months. An uncle was gored. A coachwallah was so bashed up that he could not drive the wedding party back down the mountain road. As for the mahout — who comes last in the Indian's interesting reverse hierarchy of concern — he has had to undergo emergency surgery for a brain clot, and his condition is said to be touch and go. Yes, the crows of India may be ruthless aerial velociraptors, but there are more dangerous animals around here.

We tend to go to India in a state of chronic funk about the little predators: Escherichia coli, bilharzia, the female anopheles mosquito. Sometimes, just once in a blue moon, you can also be attacked by something sizable, in a way that is at once totally unexpected and completely cliched.

It was impossible to tell, from a quick look at the site, what had triggered the disaster. A stretch of wall opposite the beast's stall had been knocked down, and the wounds in the brown plaster seemed new. There were turds the size of cannonballs to the rear of his station, but no other clues. Some said it was a camera flash that set him off. Others said no, there was no flash. Perhaps it was just the click, they said. The first we saw of him was as we were rounding the corner of the village's main road. There were about 20 of us in Alphonsa, the smallest and least well-sprung of the three hired wedding coaches. It had been a boneshaking, two-and-a-half-hour journey, and we were very keen to be released. 'Look,' said my wife, in the tones one might use to indicate a picturesque church, 'there's an elephant running towards us.'

The motion of each leg, individually, seemed rather loping. But the overall effect was to propel him very fast, head down, like Lomu making for the goal line. Some later said they noticed an especially vile and piggy look in his eyes. I only remember thinking what a gorgeous hat he had on, scarlet with gold tassels. Our driver instantly put Alphonsa into reverse, since we were directly in the elephant's path. The animal careered on, a foot past our front window, at least as high as the bus, and that seemed to be it.

'That must be the elephant Kuldeep was meant to ride on,' we joked, referring to the groom. This was India. The place was crawling with elephants. You would expect to see one moving at above average speed. But for some reason the driver wouldn't let us dismount. 'Oh come on!' we cried to his assistant. 'Tell him to let us out!' We tried to open the automatic doors ourselves. 'We've been trapped in this bus for ages!' we moaned. It was almost noon; in fact it was dead on noon, and religion dictated that the wedding had to take place by midday. We'd travelled all this way, winding and grinding with raging bellies through the mountains of Tamil Nadu, and we were going to miss the main event. 'Oh, let us out,' we bawled in frankly colonial accents. 'Why won't he let us out?' we demanded of the coachwallah as he jabbered to the driver.

'There is tensum,' the answer came, at length. 'Terisum?' we said irritably. 'What is tensum? Because if tensum is part of your Hindu wedding ceremony, we jolly well want to see it. That is the whole point.' No,' the coachwallah explained. There was tension in the village. Tension because of the elephant. Then it occurred to me that I had seen a man running after the animal, and on reflection he had looked a bit scared.

When the driver finally nosed Alphonsa up the road towards the temple, it was evi dent that something big had happened. A woman was being led away in tears. People were wandering around in a daze. The dust — literally — had not yet settled. But the wedding was due any second, and faced with the twin imperatives of a natural calamity and a religious ceremony, the Indians have no hesitation. The injured may be tended, but the ceremony goes on.

So we were directed up the steps of the vast Hindu temple, a rectangle with 40ft candy-striped walls. A couple of halfnaked monks pointed to my shirt and I removed it. My father-in-law and my sons did the same. That's the routine.

They say the temple at Thiravettu is almost 2,000 years old. It is a few miles from the tip of India, rising out of the palm jungle, a colossal cloister decorated with ancient carvings: you know the type, those wiggle-bottomed goddesses with lotus-stud noses and breasts like scoops of ice cream. It was so big and quiet within that at first we felt lost. My watch said five past twelve. Surely we had missed the wedding, or had it been scrapped in the chaos?

We padded as fast as we decently could towards the centre of the complex. 'Morning. squire,' I said to a passing holy man. My pyjama trousers contained stitching, making us in breach of the dress code, and I did not want to be expelled. At last we arrived in the middle. to find the union of Kuldeep and Lakshmi being hastily consecrated. It was murky, but the essentials of the service were familiar from the Sikh rites we had already seen: the chanting, the garlands, the moving procedure in which the couple march seven times around the symbolic hearth. Kuldeep looked pretty thoughtful, even for a man on his wedding day. I later heard that the bride had been crying.

As we stood in the shadows. I picked up snatches of news. 'This is only second-hand,' said shirtless Steve, like me a cousin by marriage. 'but I hear Kumi's broken his hip and his foot.' 'They say Kumi's been gored.' 'Someone's been gored in the tummy.' 'Not Kumi's tummy?' And so on. Then we were all being hustled, still whispering, through the holy of holies. This was a dark, dank, stone sanctuary, slippery with holy oil and illuminated only by flickering candles. There were the ubiquitous marigold garlands, and little piles of saffron powder, and in the middle was an effigy of reclining Vishnu, the temple's deity. Unusually, this Vishnu was biodegradable. He was composed of seven medicinal herbs, including garlic, and cemented together by jaggery, a sugar-like substance.

We filtered among the strange Hindu caryatids, and rumour circulated like incense. First it was suggested that there were only two casualties, neither of them serious. Then someone speculated that there was a temporarycover-up going on, to allow the wedding to proceed. Someone had seen a victim lying, worryingly motionless, in the back of a car as it sped away. Someone's condition was said to be 'critical'. Would he make it? Shrug, grimace.

What happened was this. Cousin Kumi was in the process of photographing his girlfriend, Ingrid, as she stood before the beast, chained in his place before the temple. Something disturbed the animal so badly that he ripped his chain loose, grabbed Ingrid in his trunk, and rolled her in the dust. One eyewitness said he seemed to toy with her between his forelegs. at one point lifting his huge wastepaper basket foot and poising it over her. 'I could see his whole belly above me,' said Ingrid later, as she recovered, in a third hospital, from her grazes. 'I thought I was going to die.'

Even allowing for generous adornment by his well-wishers, Kumi now acted with great bravery. He dashed forward to distract the animal: at which point the elephant left Ingrid, went for him, and gave him the same treatment. Kumi's life was probably now saved, in turn, by the mahout. who was frantically trying to control his charge from the rear. Thoroughly maddened, the beast whirled round, in so far as an elephant can be said to whirl.

He went for the crowd, made up of guests and locals who had come to rubberneck the wedding. They say the shrieking and the trumpeting were now continuous, and what one witness remembers most is the vibration, the shaking of the earth at the elephant's tread. It was during this violent juggernaut U-turn, in front of the temple, that the most serious injuries were inflicted. But it was when he crashed into an electric

ity pole, sending up a shower of sparks, that the elephant panicked. He thudded into the wall, and then down the street towards our bus. After he passed us he ran for a further five kilometres, and did much damage, before he could be caught.

Afterwards, the father of the bride, an important politician, a minister in the governments of Rajiv Gandhi and Narasimha Rao, did an impressive job of spinning the news. Close relatives on both sides had been hospitalised by the nuptial beast. A village was in shock, following the frenzy of an animal which had been ritually prepared to carry the groom into the temple. Our host magnificently contrived to look on the bright side. 'If you can survive being attacked by an elephant on your wedding,' he declared, `you can survive anything. It is very auspicious.'

Only later did we discover that the animal had killed his two previous mahouts. It turned out that he was on a kind of probation. 'What are they going to do?' I asked, naively. 'Shoot him?' Oh no,' they said. 'This time they will send him back to the forest.'

That may not sound like much of a punishment to you. But then you forget that this is a temple elephant, a holy beast, quartered in the very precincts of the god. You don't shoot a consecrated beast, even after he has run amok. You don't punish a temple elephant when his very crushing of six people is, it transpires, about as propitious an omen as Vishnu can send to your wedding.