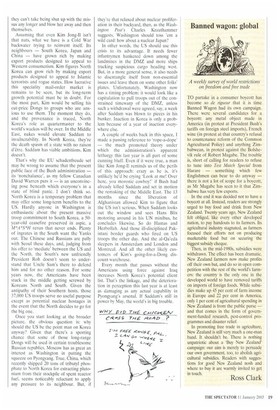 A weekly survey of world restrictions on freedom and free trade

TO partake in a consumer boycott has become so de rigueur that it is time Banned Wagon had its own campaign. There were several candidates for a boycott: any metal object made in America (in protest at President Bush's tariffs on foreign steel imports), French wine (in protest at that country's refusal to countenance reform of the Common Agricultural Policy) and anything Zimbabwean, in protest against the Bolshevik rule of Robert Mugabe. The trouble is, short of calling for readers to refuse to tune into Test Match Special from Harare — something which few Englishmen can bear to do anyway — there is not a lot of scope for a boycott, as Mr Mugabe has seen to it that Zimbabwe has very few exports. In the end it was decided not to have a boycott at all. Instead, readers are strongly urged to buy food and drink from New Zealand. Twenty years ago, New Zealand felt obliged, like every other developed nation, to pay handouts to its farmers. Its agricultural industry stagnated, as farmers focused their efforts not on producing marketable food but on securing the biggest subsidy cheque. Then, in the mid-1980s, subsidies were withdrawn. The effect has been dramatic. New Zealand farmers now make profits off their own bat, and do so in open competition with the rest of the world's farmers: the country is the only one in the developed world to have removed tariffs on imports of foreign foods. While subsidies make up 45 per cent of farm income in Europe and 22 per cent in America, only 1 per cent of agricultural spending in New Zealand is from the public purse — and that comes in the form of government-funded research, pest-control programmes and disaster relief. In promoting free trade in agriculture, New Zealand is still very much a one-man band. It shouldn't be. There is nothing unpatriotic about a 'Buy New Zealand' campaign: our aim is merely to persuade our own government, too, to abolish agricultural subsidies. Readers with suggestions for good New Zealand nosh and where to buy it are warmly invited to get in touch.