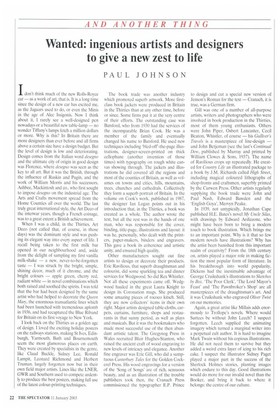 Page 22, 11 January 2003 — Wanted: ingenious artists and designers to give a new zest to life
Close

Wanted: ingenious artists and designers to give a new zest to life

Idon't think much of the new Rolls-Royce car — as a work of art, that is. It is a long time since the design of a new car has excited me, as the Jaguars used to do, or even the Minis in the age of Alec Issigonis. Now I think about it, I rarely see a well-designed pen nowadays or a beautiful new table-lamp — no wonder Tiffany's lamps fetch a million dollars or more. Why is this? In Britain there are more designers than ever before and all firms above a certain size have a design budget. But the level of design is low and deteriorating. Design comes from the Italian word desegno and the ultimate city of origin in good design was Florence, where desegno was seen as the key to all art. But it was the British, through the influence of Ruskin and Pugin, and the work of William Morris and his successors, Ashbee, Mackintosh and co., who first sought to impose desegno on the industrial age. The Arts and Crafts movement spread from the Home Counties all over the world. The last truly great international style, the Art Deco of the interwar years, though a French coinage, was to a great extent a British achievement.

When I was a child, in the Thirties, Art Deco (not called that, of course, in those days) was the dominant style and was pushing its elegant way into every aspect of life. I recall being taken to the first milk bar opened in our neighbourhood and, aside from the delight of sampling my first vanilla milk-shake — a new, never-to-be-forgotten taste — I was struck by the bright, simple, shining decor, much of it chrome, and the bright colours — apple green, cherry red, radiant white — in novel combinations which both raised and soothed the spirits. I was told that the bar had been designed by the same artist who had helped to decorate the Queen Mary, the enormous transatlantic liner which had been launched with tremendous aplomb in 1936, and had recaptured the Blue Riband for Britain on its first voyage to New York.

I look back on the Thirties as a golden age of design. I loved the exciting holiday posters on the railways stations, making St Ives, Edinburgh, Yarmouth. Bath and Bournemouth seem the most glamorous places on earth. They were created by specialists in the genre. like Claud Buckle, Sidney Lee, Ronald Lampit, Leonard Richmond and Herbert Truman, largely forgotten now but in their own field major artists. Lines like the LNER. GWR and Southern used to compete ardently to produce the best posters, making full use of the latest colour-printing techniques. The book trade was another industry which promoted superb artwork. More firstclass book jackets were produced in Britain in the Thirties than at any other time, before or since. Some firms put it at the very centre of their efforts. The outstanding case was Batsford, who from 1930 had the services of the incomparable Brian Cook. He was a member of the family and eventually changed his name to Batsford. He used new techniques including 'bled-off-the-page illustrations, designer-screen-printed on thick cellophane (another invention of those times) with typography on rough white canvas showing through. The jackets and illustrations he did covered all the regions and most of the counties of Britain, as well as volumes on towns and cities, hills, mountains, trees, churches and cathedrals. Collectively they form a superb portrait of Britain. In the volume on Cook's work, published in 1987, the designer Ian Logan points out in his introduction that, in the Thirties, a book was created as a whole. The author wrote the text, but all the rest was in the hands of one man, who was responsible for the cover, binding, title-page, illustrations and layout: it was he, personally, who dealt with the printers, paper-makers, binders and engravers. This gave a book its coherence and artistic unity. and ensured high quality.

Other manufacturers sought out fine artists to design or decorate their products. Eric Ravilious. that superb draughtsman and colourist. did some sparkling tea and dinner services for Wedgwood. So did Rex Whistler. Not all these experiments came off. Wedgwood hauled in the great Laura Knight to design its Coronation mugs. She produced some amazing pieces of rococo kitsch. Still, they are now collectors' items in their own right. Major artists designed table-cloths, carpets, curtains, furniture, shops and restaurants in that sunny period, as well as plays and musicals. But it was the bookmakers who made most successful use of the then abundant artistic talent. The Gregynog Press in Wales recruited Blair Hughes-Stanton, who raised the ancient craft of wood engraving to new levels of intricacy and elegance. Another fine engraver was Eric Gill, who did a sumptuous Canterbury Tales for the Golden Cockerel Press. His wood engravings for a version of the 'Song of Songs' are of rich, sensuous beauty, and as an illustration of the trouble publishers took then, the Cranach Press commissioned the typographer E.P. Prince to design and cut a special new version of Jenson's Roman for the text — Cranach, it is true, was a German firm.

Gill was one of a number of all-purpose artists, writers and photographers who were involved in book production in the Thirties, most of them young enthusiasts. Others were John Piper, Osbert Lancaster, Cecil Beaton, Whistler, of course — his Gulliver's Travels is a masterpiece of line-design — and John Betjeman (see the last's Continual Dew, published by Murray and printed by William Clowes & Sons, 1937). The name of Ravilious crops up repeatedly. He created for Country Life an illustrated package to a book by J.M. Richards called High Street, including magical coloured lithographs of shop-fronts and craftsmen, superbly printed by the Curwen Press. Other artists regularly supplying the book trade were John and Paul Nash, Edward Bawden and the 'English Goya', Mervyn Peake.

In 1939, not untypically, Jonathan Cape published H.E. Bates's novel My Uncle Silas, with drawings by Edward Ardizzone, who might have been born to bring a modern touch to book illustration. Which brings me to an important point. Why is it that so few modem novels have illustrations? Why has the artist been banished from this important realm of creativity? From the 18th century on, artists played a major role in making fiction the most popular form of literature. In his breakthrough into world popularity, Dickens had the inestimable advantage of George Cruikshank's illustrations to Sketches by Boz. 'The Poor Clerk'. 'The Lord Mayor's Feast' and 'The Pawnbroker's Shop' are all masterpieces of the draughtsman's art. And it was Cruikshank who engraved Oliver Twist on our memories.

Again, a great artist like Millais adds enormously to Trollope's novels. Where would Surtees be without John Leech? I suspect forgotten. Leech supplied the animating imagery which turned a marginal writer into a perpetual cult author. It is hard to imagine Mark Twain without his copious illustrations. He did not need them to survive but they added a weird extra layer of icing to his rich cake. I suspect the illustrator Sidney Paget played a major part in the success of the Sherlock Holmes stories, planting images which endure to this day. Good illustrations would do more for our invalid novel than the Booker, and bring it back to where it belongs: the centre of our culture.