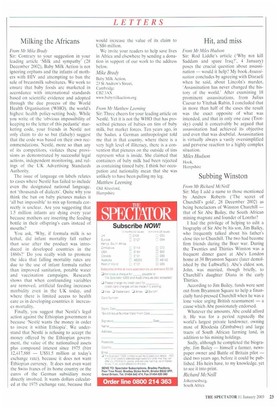 From Mr Matthew Leeming Sir: Three cheers for your leading

article on Nestle. Yet it is not the WHO that has proscribed pictures of babies on tins of baby milk, but market forces. Ten years ago, in the Sudan, a German anthropologist told me that in that country, where there is a very high level of illiteracy, there is a convention that pictures on the outside of tins represent what is inside. She claimed that containers of baby milk had been rejected as containing tinned baby. I think her occupation and nationality mean that she was unlikely to have been pulling my leg.