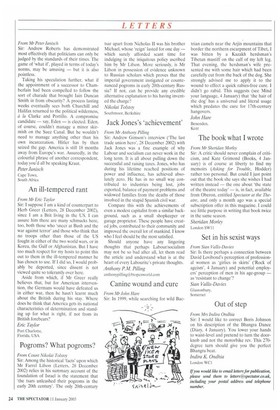 From Mr Peter Janisch Sir: Andrew Roberts has demonstrated most

effectively that politicians can only be judged by the standards of their times. The game of 'what if', played in terms of today's norms, may be amusing — but it is also pointless.

Taking his speculation further, what if the appointment of a successor to Chamberlain had been compelled to follow the sort of charade that brought lain Duncan Smith in from obscurity? A process lasting weeks eventually sees both Churchill and Halifax returned to the political wilderness, a la Clarke and Portillo. A compromise candidate — say, Eden — is elected. Eden, of course, couldn't manage a minor skirmish on the Suez Canal. But he wouldn't need to manage anything other than his own incarceration. Hitler has by then seized the gap. America is still 18 months away from Europe's war. Assuredly, in the colourful phrase of another correspondent, today you'd all be speaking Kraut.