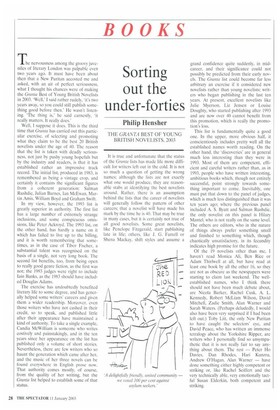 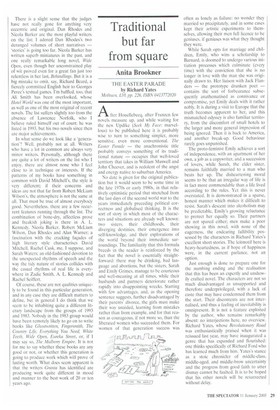 THE GRANTA BEST OF YOUNG BRITISH NOVELISTS, 2003 he nervousness among the groovy juveniles of literary London was palpable even two years ago. It must have been about then that a New Puritan accosted me and asked, with an air of perfect seriousness, what I thought his chances were of making the Granta Best of Young British Novelists in 2003. 'Well,' I said rather rudely, 'it's two years away, so you could still publish something good before then.' He wasn't listening. 'The thing is,' he said earnestly, 'it really matters. It really does.'

Well, I suppose it does. This is the third time that Granta has carried out this particular exercise, of selecting and promoting what they claim to be the best 20 British novelists under the age of 40. The reason that the list is taken with deadly seriousness, not just by pushy young hopefuls but by the industry and readers, is that it has established rather an impressive track record. The initial list, produced in 1983, is remembered as being a vintage crop, and certainly it contains the significant figures from a coherent generation: Salman Rushdie, Julian Barnes, Ian McEwan, Martin Amis, William Boyd and Graham Swift.

In my view, however, the 1993 list is greatly superior in authority. The first list has a large number of extremely strange inclusions, and some conspicuous omissions, like Peter Ackroyd. The 1993 list, on the other hand, has hardly a name on it which has failed to live up to the billing, and it is worth remembering that sometimes, as in the case of Tibor Fischer, a substantial talent was recognised on the basis of a single, not very long book. The second list benefits, too, from being open to really good genre fiction, as the first was not; the 1993 judges were right to include lain Banks, as the 1983 should have included Douglas Adams.

The exercise has undoubtedly benefited literary life to some degree, and has generally helped some writers' careers and given them a wider readership. Moreover, even those writers who have not cashed in their credit, so to speak, and published little after their appearance have maintained a kind of authority. To take a single example, Candia McWilliam is someone who writes costively and painstakingly, and in the ten years since her appearance on the list has published only a volume of short stories. Nevertheless, there are few writers who so haunt the generation which came after her, and the music of her three novels can be found everywhere in English prose now. That authority comes mostly, of course, from the quality of her writing, but the Granta list helped to establish some of that status. It is true and unfortunate that the status of the Granta lists has made life more difficult for writers left out in the cold. It is not so much a question of getting the wrong names; although the lists are not exactly what one would produce, they are reasonable stabs at identifying the best novelists around. Rather, there is an assumption behind the lists that the career of novelists will generally follow the pattern of other careers; that a novelist will have made his mark by the time he is 40. That may be true in many cases, but it is certainly not true of all good novelists. Some great novelists, like Penelope Fitzgerald, start publishing late in life; others, like J. G. Farrell or Shena Mackay, shift styles and assume a grand confidence quite suddenly, in midcareer, and their significance could not possibly be predicted from their early novels. The Granta list could become far less arbitrary an exercise if it considered new novelists rather than young novelists; writers who began publishing in the last ten years. At present, excellent novelists like Julie Myerson, Liz Jensen or Louise Doughty, who started publishing after 1993 and are now over 40 cannot benefit from this promotion, which is really the promotion's loss.

This list is fundamentally quite a good one. In the upper, more obvious half, it conscientiously includes pretty well all the established names worth reading. On the other hand, the 'discoveries' are in general much less interesting than they were in 1993. Most of them are competent, efficient and careful writers rather than, as in 1993, people who have written interesting, ambitious books which, though not entirely successful, point strongly towards something important to come. Inevitably, one must put that down to the panel of judges, which is much less distinguished than it was ten years ago; where the previous panel included A. S. Byatt and Salman Rushdie, the only novelist on this panel is Hilary Mantel, who is not really on the same level. The others are editors, who in the nature of things always prefer something small and finished to something which, though chaotically unsatisfactory, in its fecundity indicates high promise for the future.

Of the 19 novelists other than me, I haven't read Monica Ali, Ben Rice or Adam Thirlwell at all, but have read at least one book by all the other 16, so they are not as obscure as the newspapers were starting to claim last weekend. The wellestablished names, who I think there should not have been much debate about, are Nicola Barker, Rachel Cusk, A. L. Kennedy, Robert McLiam Wilson, David Mitchell, Zadie Smith, Alan Warner and Sarah Waters. (Perhaps deludedly. I would also have been very surprised if I had been left out.) Toby Litt, the only New Puritan to have caught the selectors' eye, and David Peace, who has written an immense tetralogy about the Yorkshire Ripper, are writers who I personally find so unsympathetic that it is not really fair to say anything about them. The rest — Peter Ho Davies, Dan Rhodes, Hari Kunzru, Andrew O'Hagan, Alan Warner — have done something either highly competent or striking or, like Rachel Seiffert and the very technically able, very emotionally tactful Susan Elderkin, both competent and striking. There is a slight sense that the judges have not really gone for anything very eccentric and original. Dan Rhodes and Nicola Barker are the most playful writers on the list; I adored Dan Rhodes's two deranged volumes of short narratives — 'stories' is going too far. Nicola Barker has written superb miniatures in the past, and one really remarkable long novel, Wide Open, even though her unconstrained play of wit proved even for a great fan just too relentless in her last, Behind/logs. But it is a big mistake to omit, say, Richard Beard, a fiercely committed English heir to Georges Perec's textual games. I'm baffled, too, that Ali Smith has been overlooked, whose Hotel World was one of the most important, as well as one of the most original of recent novels. The list suffers slightly too from the absence of Lawrence Norfolk, who I believe ruled himself out of court; he was listed in 1993, but his two novels since then are major achievements.

In what sense do we look like a 'generation"? Well, probably not at all. Writers who have a lot in common are always very minor writers. Personally, although there are quite a lot of writers on the list who I enjoy, there are almost none who I feel close to in technique or interests. If the patterns of my books have something in common with David Mitchell's, the style is very different; if their concerns and ideas are not that far from Robert McLiam Wilson's, the atmosphere is not the same at all. That must be true of almost everybody good. Nevertheless, there are a few recurrent features running through the list. The combination of bone-dry, affectless prose and freakish joking is there in A. L. Kennedy, Nicola Barker, Robert McLiam Wilson, Dan Rhodes and Alan Warner; a fascination with the cracking facades of high literary style characterises David Mitchell, Rachel Cusk, me, I suppose, and Sarah Waters; an old-fashioned devotion to the unexpected rhythms of speech and the way the tidy nature of stories collides with the casual rhythms of real life is everywhere in Zadie Smith, A. L. Kennedy and Rachel Seiffert.

Of course, these are not qualities uniquely to be found in this particular generation, and in any case they are difficult matters to define, but in general I do think that we seem to be inhabiting quite a different lit erary landscape from the groups of 1993 and 1983. Nobody in the 1983 group would have been remotely likely to go on to write books like Ghostwritten, Fingersmith, The Country Life, Everything You Need, White Teeth, Wide Open, Eureka Street, or, if I may say so, The Mulberry Empire. It is not for me to say whether these books are any good or not, or whether this generation is going to produce work which will prove of lasting worth. What does seem apparent is that the writers Granta has identified are producing work quite different in mood and manner to the best work of 20 or ten years ago.