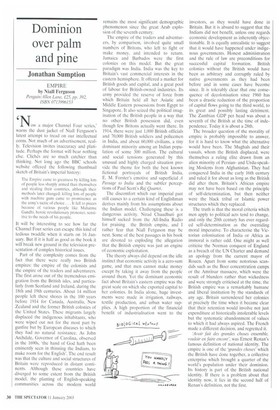 Dominion over palm and pine

EMPIRE by Niall Ferguson Penguin/Allen Lane, £25, pp. 392, ISBN 0713996153 C Now a major Channel Four series,' warns the dust jacket of Niall Ferguson's latest attempt to tread on our intellectual corns. Not much of an advertisement, really. Television invites inaccuracy and platitude. Perhaps the format will bear nothing else. Cliches are so much catchier than thinking. Not long ago the BBC schools website offered the following thumbnail sketch of Britain's imperial history:

The Empire came to greatness by killing lots of people less sharply armed than themselves and stealing their countries, although their methods later changed; killing lots of people with machine guns came to prominence as the army's tactic of choice ... It fell to pieces because of various people like Mahatma Gandhi. heroic revolutionary protester, sensitive to the needs of his people.

It will be interesting to see how far the Channel Four series can escape this kind of tedious twaddle when it starts on 16 January. But if it is half as good as the book it will break new ground in the television presentation of complex historical issues.

Part of the complexity comes from the fact that there were really two British empires: the empire of the colonists and the empire of the traders and adventurers. The first arose out of the tremendous emigration from the British isles, and particularly from Scotland and Ireland, during the 18th and 19th centuries. About 14 million people left these shores in the 100 years before 1914 for Canada, Australia, New Zealand and the former British colonies of the United States. These migrants largely displaced the indigenous inhabitants, who were wiped out not for the most part by gunfire but by European diseases to which they had no natural resistance. As John Archdale, Governor of Carolina, observed in the 1690s, 'the hand of God hath been eminently seen in thinning the Indians, to make room for the English'. The end result was that the culture and social structures of Britain were reproduced in distant continents. Although these countries have diverged to some extent from the British model, the planting of English-speaking communities across the modern world remains the most significant demographic phenomenon since the great Arab explosion of the seventh century.

The empire of the traders and adventurers, by comparison, involved quite small numbers of Britons, who left to fight or make money, and intended to return. Jamaica and Barbados were the first colonies on this model. But the great paradigm was India. India was the key to Britain's vast commercial interests in the eastern hemisphere. It offered a market for British goods and capital, and a great pool of labour for British-owned industries. Its army provided the reserve of force from which Britain held all her Asiatic and Middle Eastern possessions from Egypt to Singapore. It also seized the political imagination of the British people in a way that no other British possession did, even though few Britons actually went there. In 1914, there were just 1,000 British officials and 70,000 British soldiers and policemen in India, and about 60,000 civilians, a tiny dominant minority among an Indian population of some 300 million. The cultural and social tensions generated by this unusual and highly charged situation provide the theme for both the best known fictional portrayals of British India, E. M. Forster's emotive and superficial A Passage to India and the subtler perceptions of Paul Scott's Raj Quartet.

The discomfort which our imperial past still causes to a certain kind of Englishman derives mainly from his assumptions about the Indian model. Challenging these is a dangerous activity. Nirad Chaudhuri got himself sacked from the All-India Radio for praising the British empire, and I rather fear that Niall Ferguson may be next. Some of the best passages in his book are devoted to exploding the allegation that the British empire was just an engine of economic exploitation.

The theory always did depend on the idle instinct that economic activity is a zero-sum game, and that men cannot make money except by taking it away from the people around them, Yet the dominant economic fact about Britain's eastern empire was the great scale on which she exported capital to her colonies. In India alone, huge investments were made in irrigation, railways, textile production, and urban water supplies. A high proportion of the financial benefit of industrialisation went to the investors, as they would have done in Britain. But it is absurd to suggest that the Indians did not benefit, unless one regards economic development as inherently objectionable. It is equally unrealistic to suggest that it would have happened under indigenous governments. Honest administration and the rule of law are preconditions for successful capital formation. British colonies without the British would have been as arbitrary and corruptly ruled by native governments as they had been before and in some cases have become since. It is tolerably clear that one consequence of decolonisation since 1960 has been a drastic reduction of the proportion of capital flows going to the third world, to its great and possibly lasting detriment. The Zambian GDP per head was about a seventh of the British at the time of independence. Today it is about a 28th.

The broader question of the morality of empire is probably impossible to answer, for it is hard to know what the alternative would have been. The Mughals and their vassals, whom the British displaced, were themselves a ruling elite drawn from an alien minority of Persianand Urdu-speaking Moslems from Afghanistan. They had conquered India in the early 16th century and ruled it for about as long as the British did after them. Britain's African empire may not have been based on the principle of self-determination, but then neither were the black tribal or Islamic power structures which they replaced.

The truth is that the moral criteria which men apply to political acts tend to change, and only the 20th century has ever regarded self-determination as the overriding moral imperative. To characterise the Victorian colonisation of India or Africa as immoral is rather odd. One might as well criticise the Norman conquest of England as a breach of the UN Charter and demand an apology from the current mayor of Rouen. Apart from some notorious scandals such as the Boer concentration camps or the Amritsar massacre, which were the result of blunders rather than wickedness and were strongly criticised at the time, the British empire was a remarkably humane and liberal institution by the standards of any age. Britain surrendered her colonies at precisely the time when it became clear that their retention would involve not just expenditure at historically intolerable levels but the systematic abandonment of values to which it had always aspired. The French made a different decision, and regretted it.

Avoir fait des grandes choses ensemble, vouloir en faire encore', was Ernest Renan's famous definition of national identity. The empire is one of the `grandes choses' which the British have done together, a collective enterprise which brought a quarter of the world's population under their dominion. Its history is part of the British national identity. If there is a problem about that identity now, it lies in the second half of Renan's definition, not the first.