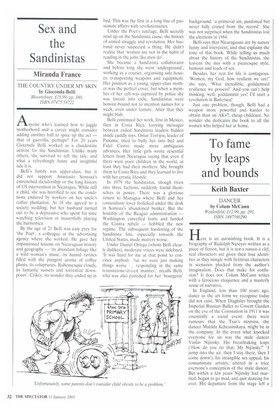 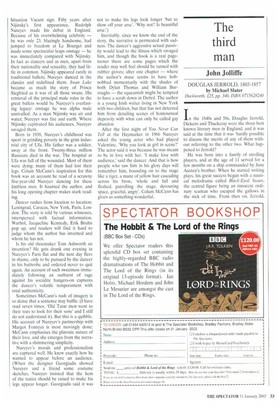 To fame by leaps and bounds

DANCER by Colum McCann Weidenfeld, £12.99, pp. 291, ISBN 1897580290 Here is an astonishing book. It is a biography of Rudolph Nureyev written as a piece of fiction, but it is not a roman a clef; real characters are given their true identities as they mingle with fictitious characters in scenarios plucked from the author's imagination. Does that make for confusion? It does not. Colum McCann writes with a ferocious eloquence and a masterly sense of narrative.

In England, less than 100 years ago, dance as the art form we recognise today did not exist. When Diaghilev brought the Imperial Russian Ballet to Covent Garden on the eve of the Coronation in 1911 it was essentially a social event: there were rumours that the Tsar's mistress, the dancer Matilda Kchessinskaya, might be in the company. In the event what knocked everyone for six was the male dancer Vaslav Nijinsky. His breathtaking leaps ('How do you do that, Mr Nijinsky?' I jump into the air, then I stay there, then I come down'), his intangible sex appeal, his consummate artistry, altered in a trice everyone's conception of the male dancer. But within a few years Nijinsky had married, begun to go mad, and quit dancing for ever. His departure from the stage left a Situation Vacant sign. Fifty years after Nijinsky's first appearance, Rudolph Nureyev made his debut in England. Because of his overwhelming celebrity — he was only 23, blazingly handsome, had jumped to freedom at Le Bourget and made some spectacular leaps onstage — he was immediately compared with Nijinsky. In fact as dancers and as men, apart from their nationality and sexuality, they had little in common. Nijinsky appeared rarely in traditional ballets; Nureyev danced in the classics and redefined them. Swan Lake became as much the story of Prince Siegfried as it was of all those swans. His retrieval of the principal male roles in the great ballets would be Nureyev's everlasting legacy: onstage he was alpha male unrivalled. As a man Nijinsky was air and water; Nureyev was fire and earth. Where Nijinsky captivated his audiences, Nureyev savaged them.

Born in 1938, Nureyev's childhood was spent in grinding poverty in the grim industrial city of Ufa. His father was a soldier, away at the front. Twenty-three million Russians died in the war. The hospital at Ufa was full of the wounded. Most of them were dying; many of them had lost their legs. Colum McCann's inspiration for this book was an account he read of a scrawny five-year-old Nureyev dancing for these limbless men. It haunted the author, and his long opening chapter makes stark reading.

Dancer rushes from location to location: Leningrad, Caracas, New York, Paris, London. The story is told by various witnesses, interspersed with factual information. Warhol, Jacqueline Kennedy, Erik Bruhn pop up, and readers will find it hard to judge whom the author has invented and whom he has not.

Is his old shoemaker Tom Ashworth an invention? He gets drunk one evening in Nureyev's Paris flat and the next day flees in shame, only to be pursued by the dancer in his bathrobe and ordered never to quit again. An account of such sweetness immediately following an outburst of rage against his socialite hangers-on captures the dancer's volatile temperament with total authenticity.

Sometimes McCann's rush of imagery is so dense that a sentence may baffle. (I have read seven times, 'Old Tatar men went to their toes to look for their sons' and I still do not understand it). But this is a quibble. His account of Nureyev's partnership with Margot Fonteyn is most movingly done: McCann emphasises the platonic nature of their love, and she emerges from the narrative with a shimmering simplicity.

Nureyev's moods and professionalism are captured well. He knew exactly how he wanted to appear before an audience. (When the designer Georgiadis showed Nureyev and a friend some costume sketches, Nureyev insisted that the hem of the tunics should be raised to make his legs appear longer. Georgiadis said it was not to make his legs look longer tut to show off your arse'. 'Why not? Is beautiful arse.') Inevitably, since we know the end of the story, the narrative is permeated with sadness. The dancer's aggressive sexual passivity would lead to the illness which ravaged him, and though the book is a real pageturner there are some pages which the reader may well feel should be turned with rubber gloves; after one chapter — where the author's muse seems to have hobnobbed momentarily with the shades of both Dylan Thomas and William Burroughs — the squeamish might be tempted to have a scrub down in Dettol. The author is a young Irish writer living in New York with two children, but that has not deterred him from detailing scenes of homosexual depravity with what can only be called gay abandon.

After the first night of You Never Can Tell at the Haymarket in 1966 Nureyev asked the young actor who had played Valentine, 'Why you look at girl in scene?' The actor said it was because he was meant to be in love with her. 'I make love with audience,' said the dancer. And that is how people who saw him in his glory days will remember him, bounding on to the stage like a tiger, a mane of yellow hair cascading across his brow, 'whole and full and fleshed, patrolling the stage, devouring space, graceful, angry'. Colum McCann has given us something wonderful.