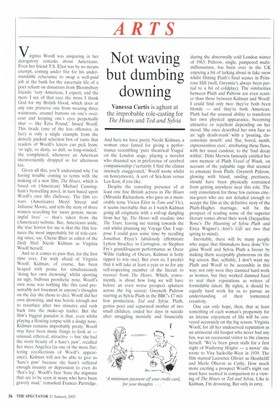 Not waving but dumbing downing

Vanessa Curtis is aghast at the improbable role-casting for The Hours and Ted and Sylvia Virginia Woolf was unsparing in her derogatory remarks about Americans. Even her friend T.S. Eliot was by no means exempt, coming under fire for his understandable reluctance to swap a well-paid job at the bank for the uncertain life of a poet reliant on donations from Bloomsbury friends: 'very American, I expect; and the more I see of that race the more I thank God for my British blood, which does at any rate preserve one from wearing three waistcoats, enamel buttons on one's overcoat and keeping one's eyes perpetually shut — like Ezra Pound,' hissed Woolf. This tirade (one of the less offensive, in fact) is only a single example from the densely packed selection box of rants that readers of Wooifs letters can pick from: `so ugly, so dusty, so dull, so long-winded,' she complained, whenever an American inconveniently dropped in for afternoon tea.

Given all this, you'll understand why I'm having trouble coming to terms with the making of a new film, The Hours, which is based on (American) Michael Cunningham's bestselling novel, in turn based upon Woolf s own Mrs Dalloway. The film costars (Americans) Meryl Streep and Julianne Moore, and tells the story of three women searching for 'more potent, meaningful lives' — that's taken from the (American) website. But, Americans aside, the true horror for me is that the film features the most improbable bit of role-casting since, say, Cherie Blair as editor of the Daily Mail: Nicole Kidman as Virginia Woolf herself.

And so it comes to pass that, for the first time ever. I'm truly afraid of Virginia Woolf. Kidman, of course, has been heaped with praise for simultaneously 'doing her own drowning' whilst sporting an ugly, bulbous prosthetic nose. Woolf s own nose was nothing like this (and presumably not foremost in anyone's thoughts on the day she chose to die). Woolf did her own drowning, and was heroic enough not to resurface after two minutes and rush back into the make-up trailer. But the film's biggest paradox is that, even whilst playing a floating corpse with a dodgy nose, Kidman remains improbably pretty. Woolf may have been many things to look at — unusual, ethereal, attractive — but 'she had the worn beauty of a hare's paw', recalled her niece Angelica (in one of the more flattering recollections of Woolf s appearance). Kidman will not be able to give us 'hare's paw' because she hasn't suffered enough insanity or depression to even do 'flea's leg'. Woolf's face 'bore the stigmata that are to be seen in many who have been gravely mad,' remarked Frances Partridge. And here we have pretty Nicole Kidman, a woman once famed for giving a performance resembling 'pure theatrical Viagra' on the London stage, playing a novelist who shunned sex in preference of cerebral companionship ('certainly I find the climax intensely exaggerated,' Woolf wrote whilst on honeymoon), A sort of Sex-Icon versus Lex-Icon, if you like.

Despite the consoling presence of at least one fine British actress in The Hours (Miranda Richardson, who gave us a memorably terse Vivien Eliot in Tom and Viv), it seems inevitable that as I watch Kidman going all enigmatic with a roll-up dangling from her lip, The Hours will escalate into The Years, leaving me staring towards the exit whilst planning my Voyage Out. I suppose I could pass some time by recalling Jonathan Pryce's fabulously effeminate Lytton Strachey in Carrington, or Stephen Fry's grandiloquent performance as Oscar Wilde (talking of Oscars, Kidman is hotly tipped to win one). But even so, I predict that it will take at least a year or so for any self-respecting member of the literati to recover from The Hours. Which, conveniently, is about how long we will have before an even worse prospect splatters across the big screen: Gwyneth Paltrow starring as Sylvia Plath in the BBC's E7 million production, Ted and Sylvia. Plath, genius poet and separated mother of two small children, ended her days in suicide after struggling mentally and financially during the abnormally cold London winter of 1963. Paltrow, single, pampered multimillionairess, has been over in the UK enjoying a bit of larking about in fake snow whilst filming Plath's final scenes in Primrose Hill (well, Gwynnie's always been partial to a bit of coldplay). The similarities between Plath and Paltrow are even scanter than those between Kidman and Woolf. I could find only two: they've both been blonde — and they're both American. Plath had the unusual ability to transform her own physical appearance, becoming attractive or repellent depending on her mood. She once described her own face as an 'ugly death-mask' with a 'pouting, disconsolate mouth' and 'flat, bored, numb, expressionless eyes', attributing these flaws, with her usual candour, to the 'foul decay within'. Dido Merwin famously entitled her own memoir of Plath Vessel of Wrath, on account of the palpable rage that seemed to emanate from Plath. Gwyneth Paltrow, glowing with bland, smiling prettiness, should have been physically restrained from getting anywhere near this role. The only consolation for those few curious cinema-goers who are not deluded enough to accept the film as the definitive story of the Plath-Hughes marriage, will be the prospect of reading some of the superior literary tomes about their work (Jacqueline Rose's The Haunting of Sylvia Plath and Erica Wagner's Ariel's Gift are two that spring to mind).

Inevitably, there will be many people who argue that filmmakers have done Virginia Woolf and Sylvia Plath a favour by making them acceptably glamorous on the big screen. But, selfishly, I don't want my Plath and Woolf to be accessible in this way; not only were they damned hard work as women, but they worked damned hard to seal their reputations as writers of formidable talent. By rights, it should be equally hard work for us to pursue an understanding of their tormented creativity.

One can only hope, then, that at least something of each woman's propensity for an intense enjoyment of life will be conveyed accurately on the big screen. Virginia Woolf, for all her undeserved reputation as an antisocial old fusspot who never had any fun, was an occasional visitor to the cinema herself. *We've been given stalls for a first night of Wuthering Heights — a movie' she wrote to Vita Sackville-West in 1939. The film starred Laurence Olivier as Heathcliff and Merle Oberon as Cathy. How much more exciting a prospect Woolf s night out must have seemed in comparison to a viewing of The Hours or Ted and Sylvia. Like la Kidman, I'm drowning. But only in envy.