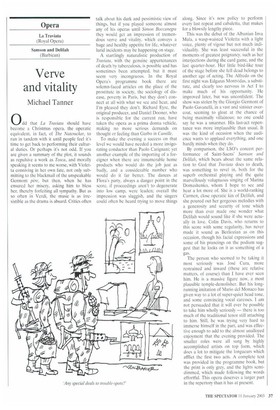 0 dd that La Traviata should have become a Christmas opera, the operatic equivalent, in fact, of The Nutcracker, to run in tandem with it until people feel it's time to get back to performing their cultural duties. Or perhaps it's not odd. If you are given a summary of the plot, it sounds as repulsive a work as Tosca, and morally speaking it seems to me worse, with Violetta conniving in her own fate, not only submitting to the blackmail of the unspeakable Germont pere, but then, when he has ensured her misery, asking him to bless her, thereby forfeiting all sympathy. But as so often in Verdi, the music is as irresistible as the drama is absurd, Critics often

talk about his dark and pessimistic view of things, but if you played someone almost any of his operas until Simon Boccanegra they would get an impression of tremendous verve and vitality, which conveys a huge and healthy appetite for life, whatever lurid incidents may be happening on stage.

A startlingly naturalistic production of Traviata, with the genuine appurtenances of death by tuberculosis, is possible and has sometimes been attempted, but it must seem very incongruous. In the Royal Opera's programme book there are solemn-faced articles on the place of the prostitute in society, the sociology of disease, poverty in Paris, but they don't connect at all with what we see and hear, and I'm pleased they don't. Richard Eyre, the original producer, and Daniel Dooner, who is responsible for the current run, have taken the opera as a prima donna vehicle, making no more serious demands on thought or feeling than Garbo in Camille.

To make the evening a success on that level we would have needed a more invigorating conductor than Paolo Carignani; yet another example of the importing of a foreigner when there are innumerable home products who would do the job just as badly, and a considerable number who would do it far better. The dances at Flora's party, always a danger point in the score, if proceedings aren't to degenerate into low camp, were leaden; overall the impression was sluggish, and the singers could often be heard trying to move things along. Since it's now policy to perform every last repeat and cabaletta, that makes for a blowsily lengthy piece.

This was the debut of the Albanian Inva Mula, a wasp-waisted Violetta with a light voice, plenty of vigour but not much individuality. She was least successful in the moments of greatest poignancy, such as her interjections during the card game, and the last quarter-hour. Her little bird-like tour of the stage before she fell dead belongs to another age of acting. The Alfredo on the first night was Edgaras MontOdas, a substitute, and clearly too nervous in Act I to make much of his opportunity. He improved later, but was unconfident. The show was stolen by the Giorgio Germont of Paolo Gavanelli, in a vast and sinister overcoat, seeming to gloat at the chance of being maximally villainous; no one could say he was a smarmer. His last-act repentance was more implausible than usual. It was the kind of occasion when the audience wants to applaud everything, and one hardly minds when they do.

By comparison, the LSO's concert performance of Saint-Saens' Samson and Delilah, which bears about the same relation to God that Traviata does to death, was something to revel in, both for the superb orchestral playing and the quite marvellously voluptuous singing of Marina Domashenko, whom I hope to see and hear a lot more of. She is a world-ranking Carmen, close operatic kin of Delilah, and she poured out her gorgeous melodies with a generosity and security of tone which more than ever made one wonder what Delilah would sound like if she were actually in love. Colin Davis, who returns to this score with some regularity, has never made it sound as Berliozian as on this occasion, though his facial expressions and some of his prancings on the podium suggest that he looks on it as something of a gas.

The person who seemed to be taking it most seriously was Jose Cura, more restrained and inward (these are relative matters, of course) than I have ever seen him. He is a massive figure now, a most plausible temple-demolisher. But his longrunning imitation of Mario del Monaco has given way to a lot of super-quiet head tone, and some convincing vocal caresses. I am not persuaded that it will ever be possible to take him wholly seriously — there is too much of the traditional tenor still attaching to him. Still, he was trying very hard to immerse himself in the part, and was effective enough to add to the almost unalloyed enjoyment that the evening provided. The smaller roles were all sung by highly accomplished artists on top form, which does a lot to mitigate the longueurs which afflict the first two acts. A complete text was provided in the programme book, but the print is only grey, and the lights semidimmed, which made following the words effortful. This opera deserves a larger part in the repertory than it has at present.