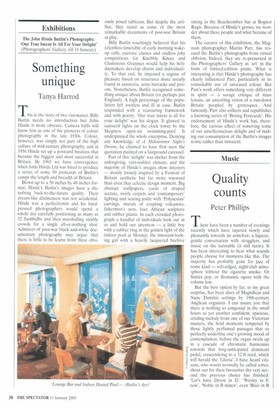 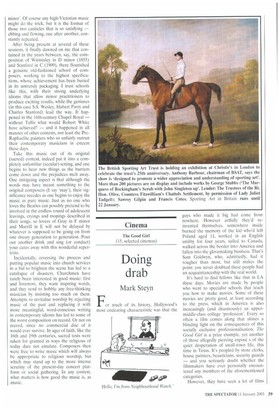 There have been a number of evenings recently which have tapered slowly and pleasantly towards an armchair, a liqueur, gentle conversation with stragglers, and music on the turntable (it still turns). It has been interesting to hear what sounds people choose for moments like this. The majority has probably gone for jazz of some kind — soft-edged, night-club atmosphere without the cigarette smoke. Or Sixties pop, or Romantic opera with the volume low.

But the best option by far, to my great surprise, has been discs of Magnificat and Nunc Dimittis settings by 19th-century Anglican organists. I can assure you that there is nothing so congenial in the small hours as yet another confident, spacious, striding melody from one of our Victorian masters, the bold moments tempered by those lightly perfumed passages that so perfectly underline one's growing mood of contemplation, before the organ swirls up in a cascade of chromatic harmonies towards that long-anticipated dominant f pedal, crescendoing to a 32 ft reed, which

= will herald the 'Gloria'. I have heard citizens, who would normally be called sober, minors, Of course any high-Victorian music might do the trick, but it is the format of those two canticles that is so satisfying — ebbing and flowing, one after another, constantly repeated.

After being present at several of these sessions, it finally dawned on me that contained in the years between, say, the composition of Walmisley in D minor (1855) and Stanford in C (1909), there flourished a genuine old-fashioned school of composers, working to the highest specifications, whose achievement has been buried in its untrendy packaging. I trust schools like this, with their strong underlying idioms that allow minor practitioners to produce exciting results, while the geniuses (in this case S.S. Wesley, Hubert Parry and Charles Stanford) lead the way. It happened in the 16th-century Chapel Royal — without Tallis what would Robert White have achieved? — and it happened in all manner of other contexts, not least the PreRaphaelite painters who so unfairly outrun their contemporary musicians in esteem these days.

Take this music out of its original (sacred) context, indeed put it into a completely unfamiliar (secular) setting, and one begins to hear new things as the barriers come down and the prejudices melt away. One intriguing aspect is that although the words may have meant something to the original composers (I say 'may), their significance recedes as one begins to enjoy the music as pure music. Just as no one who loves the Beatles can possibly pretend to be involved in the endless round of adolescent leavings, cryings and mopings described in their songs, so lovers of Gray in F minor and Murrill in E will not be delayed by whatever is supposed to be going on from one dreary generation to generation. Pour out another drink and sing (or conduct) your cares away with this wonderful repertoire.

Incidentally, reversing the process and putting popular music into church services in a bid to brighten the scene has led to a catalogue of disasters. Churchmen have rarely been interested in good music: first and foremost, they want inspiring words, and they tend to hobble any free-thinking musician by insisting too much on them. Attempts to revitalise worship by rejecting music of the past and replacing it with more meaningful, word-conscious writing in contemporary idioms has led to some of the worst composition on record. Or not on record, since no commercial disc of it would ever survive. In ages of faith, like the 16th and 19th centuries, sacred texts were taken for granted in ways the religious of today dare not emulate. Composers then were free to write music which will always be appropriate to religious worship, but which may stand up to the more intense scrutiny of the present-day concert platform or social gathering. In any context, what matters is how good the music is. as music.