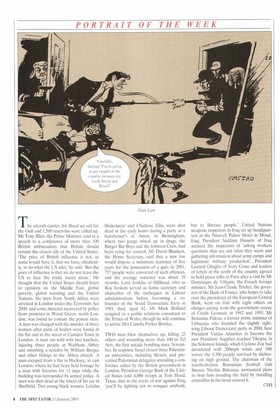 1,500 reservists were called up. Mr Tony Blair, the Prime Minister, said in a speech to a conference of more than 100 British ambassadors that Britain should remain the closest ally of the United States. 'The price of British influence is not, as some would have it, that we have, obediently, to do what the US asks,' he said. 'But the price of influence is that we do not leave the US to face the tricky issues alone.' He thought that the United States should listen to opinions on the Middle East, global poverty, global warming and the United Nations. Six men from North Africa were arrested in London under the Terrorism Act 2000, and some material recovered by police from premises in Wood Green, north London, was found to contain the poison ricin. A man was charged with the murder of three women after parts of bodies were found in his flat and in the street at Camden Town in London. A man ran wild with two hatchets, injuring three people at Waltham Abbey and smashing a reredos by William Burges and other fittings in the Abbey church. A man escaped from a flat in Hackney, in east London, where he had been held hostage by a man with firearms for 11 days while the building was surrounded by armed police. A man was shot dead at the wheel of his car in Sheffield. Two young black women. Letisha Shakespear and Charlene Ellis, were shot dead in the early hours during a party at a hairdresser's at Aston, in Birmingham, where two gangs mixed up in drugs, the Burger Bar Boys and the Johnson Crew, had been vying for control. Mr David Blunkett, the Home Secretary, said that a new law would impose a minimum sentence of five years for the possession of a gun; in 2001, 757 people were convicted of such offences, and the average sentence was about 18 months. Lord Jenkins of Hillhead, who as Roy Jenkins served as home secretary and chancellor of the exchequer in Labour administrations before becoming a cofounder of the Social Democratic Party in 1981, died, aged 82. Mr Mark Bolland resigned as a public relations consultant to the Prince of Wales, though he will continue to advise Mrs Camilla Parker Bowles.

TWO men blew themselves up, killing 23 others and wounding more than 100 in Tel Aviv, the first suicide bombing since November. In response Israel closed three Palestinian universities, including Birzeit, and prevented Palestinian delegates attending a conference called by the British government in London. President George Bush of the United States told 4,000 troops at Fort Hood, Texas, that in the event of war against Iraq, 'you'll be fighting not to conquer anybody, but to liberate people.' United Nations weapons inspectors in Iraq set up headquarters at the Nineveh Palace Hotel in Mosul, Iraq; President Saddam Hussein of Iraq accused the inspectors of 'asking workers questions that are not what they seem and gathering information about army camps and legitimate military production'. President Laurent Gbagbo of Ivory Coast and leaders of rebels in the north of the country agreed to hold peace talks in Paris after a visit by Mr Dominique de Villepin, the French foreign minister. Mr Jean-Claude Trichet, the governor of the Bank of France, who hopes to take over the presidency of the European Central Bank, went on trial with eight others on charges arising from the government rescue of Credit Lyonnais in 1992 and 1993. Mr Rolandas Paksas, a former prime minister of Lithuania who founded the slightly rightwing Liberal Democratic party in 2000, beat President Valdas Adamkus to become the new President. Supplies reached Tikopia, in the Solomon Islands, which Cyclone Zoe had devastated with 200mph winds and 30ft waves; the 1,300 people survived by sheltering on high ground. The chairman of thc fourth-division Romanian football club Steaua, Nicolae Balcescu, announced plans to stop fans invading the field by installing crocodiles in the moat around it.