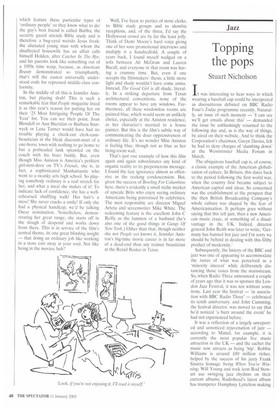 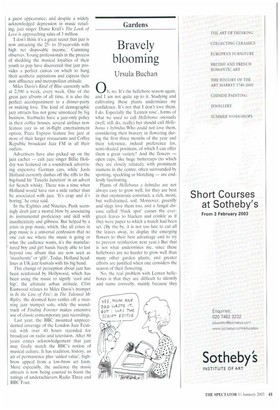 It was interesting to hear ways in which wearing a baseball cap could be interpreted as discourteous debated on BBC Radio Four's Today programme recently. Naturally, an issue of such moment — 'I can see we'll get emails about this' — demanded the issue be unblushingly returned to the following day and, as is the way of things, be aired on their website. And to think the Corporation's chairman, Gavyn Davies, felt he had to deny charges of 'clumbing down' at the Westminster Media Forum in March.

The ubiquitous baseball cap is, of course, a classic example of the American globalisation of culture. In Britain, this dates back to the period following the first world war, when the country first became subject to American capital and ideas. So concerned was the establishment at the prospect that the then British Broadcasting Company's whole culture was shaped by the fear of Americanisation. It perhaps goes without saying that this left jazz, then a new American music craze, at something of a disadvantage in the UK. Indeed, director general John Reith was later to write, 'Germany has banned hot jazz and I'm sorry we should be behind in dealing with this filthy product of modernity.'

It was a reflection of a largely unreported and unnoticed rejuvenation of jazz — according to Mintel, for example, it is currently the most popular live music attraction in the UK — and the cachet the music now attracts as being 'hip'. Robbie Williams is around £80 million richer, helped by the success of his jazzy Frank Sinatra homage Swing When You're Winning; Will Young and rock icon Rod Stewart use swinging jazz rhythms on their current albums; Radiohead's latest album has trumpeter Humphrey Lyttelton making a guest appearance; and despite a widely acknowledged depression in music retailing, jazz singer Diana KraII's The Look of Love is approaching sales of 3 million.

Miles Davis's Kind of Blue currently sells at 2,500 a week, every week. One of the great jazz albums of all time, it is also the perfect accompaniment to a dinner-party or making love. The kind of demographic jazz attracts has not gone unnoticed by big business. Starbucks have a jazz-only policy in their coffee houses, several airlines now feature jazz as an in-flight entertainment option, Pizza Express feature live jazz at most of their larger restaurants and Coffee Republic broadcast Jazz FM in all their outlets.

Advertisers have also picked up on the jazz cachet — cult jazz singer Billie Holiday was featured on a soundtrack advertising expensive German cars, while Jools Holland currently dashes off the riffs to the big-band hit 'Tuxedo Junction' in an advert for Scotch whisky. There was a time when Holland would have run a mile rather than be associated with jazz. 'It's crap and it's boring,' he once said.

In the Eighties and Nineties, Punk seemingly dealt jazz a mortal blow by associating its instrumental proficiency and skill with inauthenticity and glibness. But helped by a crisis in pop music, which, like all crises in pop music is a universal confession that no one can see where the music is going or what the audience wants, it's the manufactured buy and girl bands barely able to last beyond one album that are now seen as 'inauthentic' or 'glib'. Today, Holland headlines at UK jazz festivals with his big band.

This change of perception about jazz has been reinforced by Hollywood, which has been using the music to signify 'cool and hip', the ultimate urban attitude. Clint Eastwood relaxes to Miles Davis's trumpet in In the Line of Fire'; in The Talented Mr Ripley, the doomed hero rattles off a stunning jazz trumpet solo, while the soundtrack of Finding Forester makes extensive use of classic contemporary jazz recordings.

Last year, the BBC mounted unprecedented coverage of the London Jazz Festival, with over 40 hours recorded for broadcast on radio and television. After 80 years comes acknowledgement that jazz may finally match the BBC's notion of musical culture. It has tradition, history, an air of permanence plus 'added value', highbrow appeal from a low-brow art form. More especially, the audience the music attracts is now being courted to boost the ratings of underachievers Radio Three and BBC Four.