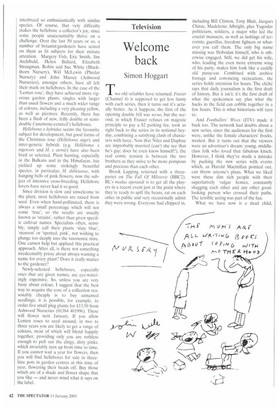 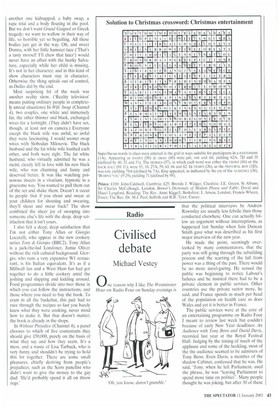 Two old reliables have returned. Frasier (Channel 4) is supposed to get less funny with each series, then it turns out it's actually better. As it happens, the first of the opening double bill was so-so, but the second, in which Frasier refuses on majestic principle to pay a $2 parking fee, took us right back to the series in its notional heyday, combining a satisfying clash of characters with farce. Now that Niles and Daphne are improbably married (can't she see that he's gay; does he even know himself?), the real comic tension is between the two brothers as they strive to be more pompous and precious than each other.

Brook Lapping returned with a threeparter on The Fall Of Milosevic (BBC2). BL's modus operandi is to get all the players in a recent event just at the point where they're ready to spill the beans, rat on each other in public and very occasionally admit they were wrong. Everyone had chipped in,

including Bill Clinton, Tony Blair, Jacques Chirac, Madeleine Albright, plus Yugoslav politicians, soldiers, a major who led the crucial massacre, as well as lashings of terrorists, guerillas, freedom fighters or whatever you call them. The only big name missing was Slobodan himself, who is otherwise engaged. Still, we did get his wife, who, leading the even more extreme wing of his party, makes him look like a cuddly old pussy-cat. Combined with archive footage and convincing recreations, the series holds attention for hours. The cliché says that daily journalism is the first draft of history. But it isn't; it's the first draft of what the spokesmen say plus what the hacks in the field can cobble together in a few hours. This is what historians will turn to.

And Footballers' Wives (ITV) made it back too. The network had doubts about a new series, since the audiences for the first were, unlike the female characters. frocks, modest. But it turns out that the viewers were an advertiser's dream: young, middleclass folk who loved that fabulous kitsch. However, I think they've made a mistake by packing the new series with events which, as Harold Macmillan pointed out, can throw anyone's plans. What we liked were these dim rich people with their superlatively vulgar homes, constantly shagging each other and any other goodlooking person who crossed their paths. The terrible acting was part of the fun.

What we have now is a dead child, another one kidnapped, a baby swap, a rape trial and a body floating in the pool. But we don't want Grand Guignol or Greek tragedy: we want to wallow in their way of life, so horrible yet so beguiling. All these bodies just get in the way. Oh, and sweet Donna, with her little hamster face (That's a tasty morsel! I'll chew that later') would never have an affair with the hunky Salvatore, especially while her child is missing. It's not in her character, and in this kind of show characters must stay in character. Otherwise the thing spirals out of control, as Dallas did by the end.

Most surprising hit of the week was another reality show. (Reality television' means putting ordinary people in completely unreal situations) In Wife Swap (Channel 4), two couples, one white and immensely fat, the other thinner and black, exchanged wives for a fortnight. (They didn't have sex, though, at least not on camera.) Everyone except the black wife was awful, so awful they were fascinating. I would sooner swap wives with Slobodan Milosevic. The black husband and the fat white wife loathed each other, and both were right. The fat white husband, who virtually admitted he was a racist, clearly fell in love with his new black wife, who was charming and funny and deserved better. It was like watching poi sonous insects in a vivarium, hypnotic in a gruesome way. You wanted to pull them out of the set and shake them. Doesn't it occur to people that if you shout and swear at your children for shouting and swearing, they'll shout and swear back? The show combined the sheer joy of snooping into someone else's life with the deep, deep satisfaction that it isn't yours.

I also felt a deep, deep satisfaction that I'm not either Tony Allan or Giorgio Locatelli, who appear in the new cookery series Tony & Giorgio (BBC2). Tony Allan is a jack-the-lad Londoner, Jamie Oliver without the rich cultural background. Gior gio, who runs a very expensive WI restaurant, is his Italian equivalent. It's as if a Millvvall fan and a West Ham fan had got together to do a little cookery amid the joshing and slapping and kidding around.

Food programmes divide into two: those in which you can follow the instructions, and those where you need to buy the book. To cram in all the backchat, this pair had to race through the recipes so fast you barely knew what they were cooking, never mind how to make it. But that doesn't matter: the book is already in the shops.

In Without Prejudice (Channel 4), a panel chooses to which of five contestants they should give £50,000, purely on the basis of what they say and how they seem. It's a mess, and a waste of Lisa Tarbuck, who is very funny and shouldn't be trying to hold this lot together. There are some small pleasures, chiefly deriving from people's prejudices, such as the Scots panellist who didn't want to give the money to the gay dad: 'He'd probably spend it all on throw rugs.'